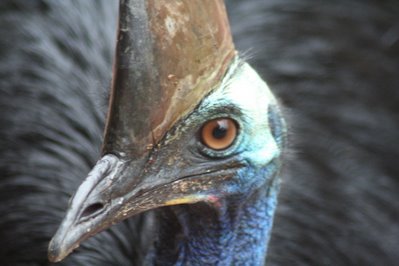 This whole birding racket, I've often explained, as if in defense of my hobby, leads one to the most spectacular natural places of the globe. It is as if the rare, endangered and spectacular species all over the world possess an unerring eye for our most glorious and unspoiled corners. But it is of course precisely because our own species has done so very much spoiling that such places are remote and inaccessible, and the birds in them so threatened. Until global warming really kicks in with all its turbo-charged, microwaving power, habitat destruction will continue to be the primary cause of extinction for those waning species we are supposed to be sharing the planet with.

When particular birds are really threatened, at risk of being completely extinguished, it is invariably because mankind has done away with all of the suitable habitat in the name of the still apparently admirable goal of "development." Seated in the waiting room of extinction, birds like the Southern cassowary have nearly nothing left of their formerly splendid environment to inhabit, and in such cases birding brings the birder right to the depressing front lines of the ongoing war between mankind and the rest of the natural world.

Which is how I came to be sitting in a cushioned rattan garden chair on the airy veranda of the Licuala Lodge in Mission Beach, Queensland, a "lifestyle-oriented" beachfront community a couple of hours south of Cairns. A comfortable and tastefully appointed B+B with an immaculately manicured garden in the tropical style, the Licuala Lodge lies on a residential cul de sac shaped on the model of any of innumerable luxury Floridian housing developments: a tract of land with a "drive" or a "close" or a "court" paved right through its middle, like the backbone of a fish, and many landscaped driveways off to either side, completing the skeleton. I put my binoculars nearby on the glass-topped coffee table and put my feet up on the porch railing and drank jasmine tea; it's not so bad here at the front, at least for us humans.

The B+B is hosted by an expat british couple, Sue and Mick, who have two semi-permanent residents, Cassie and Charlie, two Southern cassowaries who stride noiselessly out of the adjacent jungle for daily visits. There is a symbiotic interrelationship of species here, as between an anemonefish and its anemone: the regular appearance of the cassowaries ensures the regular appearance of paying, birder guests, and in return the cassowaries profit in the form of banana handouts.

Now, don't go getting all self-righteous on me and trying to denigrate my exciting sighting of wild cassowaries. There is no difference between Cassie and Charlie and the birds that come to your backyard feeder for sesame seeds except that cassowaries are six feet tall and flightless. I know you imagined me trudging through the dim and sodden rainforest dawn, up to my ankles in muck and pulling off the leeches as fast as they could fall out of the trees and down the back of my neck, but that wasn't how it was. When I pulled into the driveway, binoculars around my neck, Mick came out to greet me. (If you remember from the last paragraph, he's one of the people, not one of the cassowaries).

"What are my chances of seeing a cassowary, do you suppose?" I asked, after discussing rooms and rates and so on.
"There might be one about just now," said Mick, "there was one here half an hour ago."
Oh Drat, I thought.

Not to seem anxious, but once I had put my bag in my room and had a first cup of tea, I asked again:
"Mick, is there anywhere I should go for the rest of the afternoon, you know, to sort of increase my chances?"
"Honestly, if you really want to see cassowaries, I would stay right here. You'll see them, I can pretty much assure you. Don't worry." 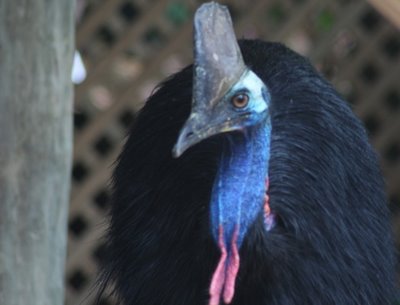 Cassowaries are enormous, and potentially dangerous. Only Ostriches and Emus are bigger, but cassowaries are tougher. They have a vicious horn-like spur of bone on top of their head and gigantic, muscled thighs, like a duck leg as trained by Arnold Schwarzenegger. They have been known to head-butt and then kick people to death, generally in response to some perceived threat to their young. 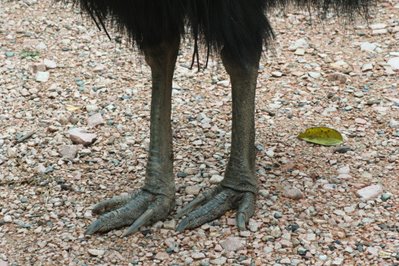 
In Papua New Guinea there are still stable populations of cassowary, but in Australia, in tropical north Queensland, there may be as few as five hundred left. This is largely because there is nowhere left for them to live; only 3 to 5% of their original habitat remains, and this is fragmented into many small bits, divided from one another by sterile oceans of sugar cane plantation. Although there are still some wonderful tracts of jungle in Queensland, if I were to log into your bank account and remove all but 3% of your funds, I'm sure you would feel that, essentially, you had been wiped out. A bird this size, which can gobble an entire banana the way you might swallow an aspirin, requires a lot of territory in which to forage for fallen fruits. 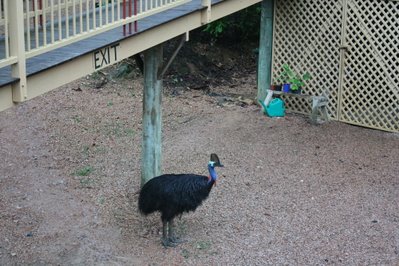 Cassowary in the driveway. There must be a banana around here somewhere....

Restless, I went for a walk in the garden, staying on the edge adjacent to the jungle, peering into the forest and hoping for a glimpse of a cassowary. Then I heard Mick, calling for me rather urgently. I quickly ran back towards the house, past the swimming pool. Mick was on the second floor porch, pointing down and over the edge of the house. Charlie, I think it was, was patrolling in front of the garage doors, looking this way and that, but mostly up at the porch, expecting a banana to materialize at any moment. He stayed a good fifteen or twenty minutes before sidling off into the forest, but came again an hour later. In the evening Cassie came; she is larger, older and more powerful than Charlie and will not tolerate his presence outside of the breeding season. According to Sue, Cassie will chase Charlie off if she arrives at the house and finds him there; such is the law of the jungle, for there might not be enough bananas to go around. I photographed the birds a volonté. 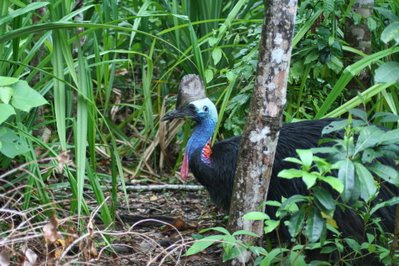 It took a good twenty minutes of following Charlie around before I managed to get a photograph of him in front of anything that remotely looked like jungle. He was either in front of the garage, or the latticework doors to the downstairs common area of the B+B, or in front of the car. At last as he was slinking back into the forest I got this remotely "wild" shot.


In the morning, at dawn, I knew Cassie was arriving by the crunch of her massive feet on the gravel of the driveway. It sounded just like a person, but walking more calmly and deliberately. In the jungle of course, they manage to move almost silently. When necessary they can run in short bursts at speeds of up to 50km an hour. In their natural state, cassowaries are said to by shy and wary. But cassowaries in Australia are much reduced in personality and behavior, by circumstances. I almost felt like a cheat, seeing my first cassowary this way. After all, birds seen in a zoo do not count for a "life list." How tame are Cassie and Charlie? How legitimate is it to "tick" them? Shouldn't I have shlepped it into the forest, hoping that against the odds I would stumble upon a bird who refused, on principal, to head to suburbia for easy handouts? I tortured myself with these thoughts as I left Mission Beach, driving back towards Cairns along "Cassowary Drive." The access road to the community cuts through a chunk of the pristine jungle that backs up onto the Licuala Lodge. All along its length are warning signs: "Do not feed the cassowaries," or "SLOW DOWN, Cassowary Territory!" An enormous, billboard-sized yellow and black warning sign shows a graphic of a cassowary being hit by a car, and the legend: "Cassowaries have been killed by speeding!" According to Sean Dooley

there are an average of four cassowary fatalities a year caused by humans hitting them with cars. In a population of five hundred or so, in a bird with a three to five year breeding cycle, this is significant, but obviously if we allow driving at all, and therefore consider it societally acceptable that a certain number of humans are going to be killed each year in automobile accidents, we aren't going to outlaw cars to prevent cassowary deaths. I tapped the brakes, and slowed just in time to see, there, on the grassy margins of the highway, a third, unnamed cassowary. Was this one wilder, less accustomed to civilization and its ways? I wanted to pull over, but there was nowhere to park, and traffic behind me, so I had to zip on by. 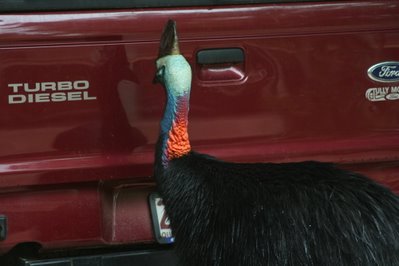 This poor cassowary does not think that Mick and Sue's parked Ford SUV is a banana, instead it is investigating its own reflection in the glossy paint job. If there were only five hundred of you humans left you would carefully and sadly stare into the mirror, too, just in case some surprise chance at friendship had somehow eluded you.