One of the most compelling segments in Al Gore's An Inconvenient Truth was the terrifying presentation of a series of before-and-after photographs of glaciers around the globe, all melting faster than a stick of butter at the bottom of a dutch oven. I remember one of the examples being a glacier in New Zealand, although I can't remember which one. It could well have been the Fox Glacier, which has been naturally receding for the last several hundreds of years, but is now retreating up its valley at an alarming rate. It is already a good half an hour's walk from the car park to the foot of the glacier, and shortly the hordes of tourists who drive up to see it will have to pack picnics and plan on making a full day's outing out of the visit.

Driving in from the main road one soon reaches a sign, posted at the edge of a nice patch of mature rain forest, reading "in 1750 the glacier reached here." It is a full ten more minutes of driving up the dirt access road before reaching the car park, which lies in the shadow of a mighty black basalt bluff several hundred feet high. A sign indicates that as recently as the 1600s, the glacier, now far up the valley, covered not only the car park but reached to the very top of the looming cliff. A display of bleached photographs charts the accelerated recession of the glacier almost since the invention of photography, a period almost exactly contemporaneous with our species' earth-baking, fossil-fuel-burning activities.

Fox is entirely unlike the glaciers I saw recently in Antarctica, which were taught and polished, with pristine crevasses tinted an unrelenting dry blue, massive ice-cliffs suggesting dominance and eternity. Instead Fox glacier is wet and sooty, dripping, calving, hot and bothered. A foaming, gushing cascade of fully-formed river emerges like a mighty sweat from the bottom of the ice. The glacier itself looks like an enormous pile of the slushy rubble left over from snow-plowing operations and running with rivulets of water in the first breath of spring. 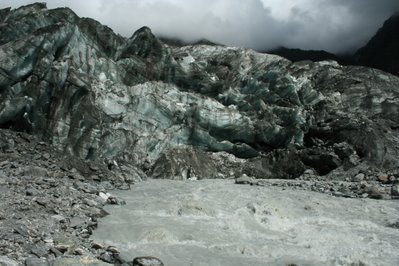 As the planet warms, a raging torrent of milky meltwater gushes out from the foot of the glacier 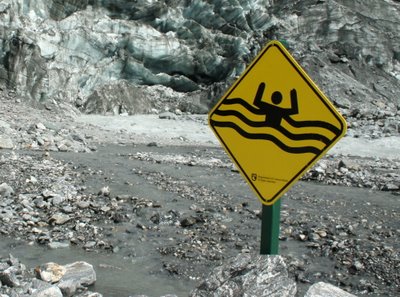 A couple of posts ago, while describing a descent of Mt. Fyffe, near Kaikoura, I disparaged the most excellent New Zealand Dept. of Conservation, which administers hundreds of fabulous wildlife areas and spectacular campsites, by suggesting that their casually advertised riverside walk back to the carpark there might well have benefitted from "some industrial hazard warning signs of the yellow and black variety, featuring an icon of a man hip deep in raging rapids, waving his arms for balance...." I don't know whether to be pleased that it turns out they actually have these or even more upset, since none of them were posted there. In fact, judging by the abundance of signage at the glacier, it seems probable that the D.O.C. blew its entire budget on the warning signs in use at Fox and didn't have enough left over to put up any notices anywhere else. 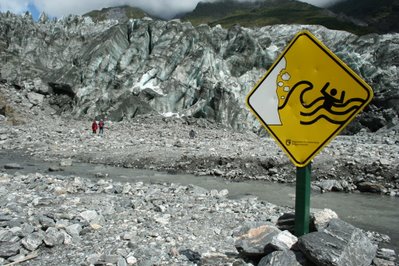 Warning: crumbling glacier may cause tsunami 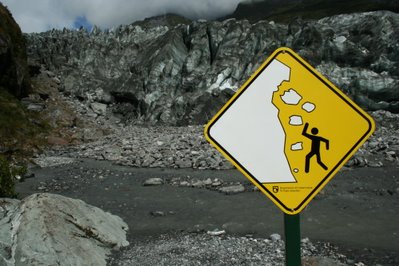 Warning: do not boogie down underneath the glacial overhang, as the funky disco vibrations emanating from your groovy self may cause enormous chunks of ice to break off and crush you 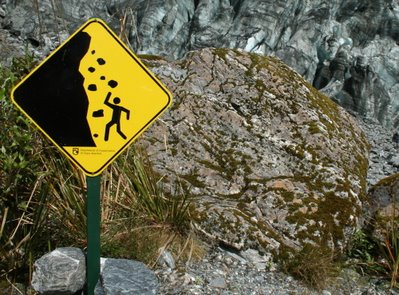 Warning: don't think that you are safe just because you are not disco-dancing in front of the glacier. Just plain old rocks may fall from the surrounding cliffs onto your head at any time 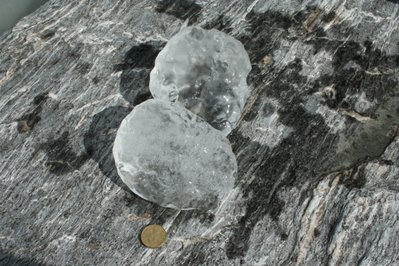 On the rocks with salt, please: delicious many-thousands-of-years-old ice plucked from the raging glacial outflow. I contracted a wicked ice-cream headache from chewing on the stuff 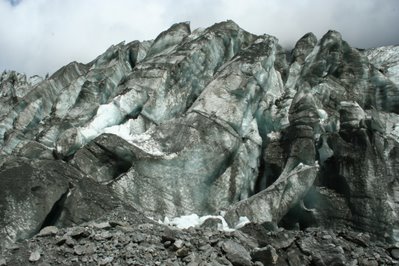 Although this looks much like the shoulder of the Brooklyn-Queens Expressway a couple of days after a heavy New York City snowfall, it is actually the front edge of the rapidly melting Fox Glacier

Some just don't get enough of the 'ice'. Hot here - 45F that is above zero! Great to get out in the Sun and warm air.

How many days till your bday?

Thinks: Were Fox mints named after this glacier?

hey mista rich, happy 07. good to read you got off the ice so nice. definitely capitalize on that hair thing. I mean, that is waaaay beyond method acting, right? the sneakers r starting to jump'n'run after it took them quite a while to learn how to walk in the avid -- more of it in spring...
take care, your fellow nasenfeichtiger from viennatown, m.

a little bird told me it was your birthday...! happy birthday Rich! have they called you yet for a part in the sequel to "Yentl?" That beard is almost...pornographic!

signed:
your pal on Ice

p.s. hope your toes have recovered from your "hike"

Katie from the Ice said...

Hope you have a great day! I haven't gotten a proper email out to you, and I'm sorry. Rest assured, it's on its way!