The night before we left Easter Island I headed out into the wilds of the jungle, near the swimming pool, for a relaxing walk and wind-down from our week of filming. On that walk I made what I feel certain is an archeological discovery of immense significance. I, a rank amateur, have discovered two previously unknown Moai, standing in a bamboo grove, proving that archeology can still be done by the everyman, the run-of-the-mill joe willing to go where no man has gone before. 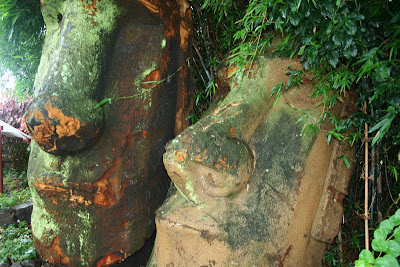 With very few exceptions all the great Moai of Easter Island are either standing in lines along the coast, facing inland, or abandoned in transit along the presumed routes from the quarry to the coast. Because of this, decades of scholarship have described Rapa Nui culture as being "inward-looking" and focused on its own needs and isolation. Well, I have upset that apple-cart. Although rather lichen-infested and crumbly, the presence of these two never-before-seen Moai in the forest suggests many completely new interpretations of the role of these sculptures in Rapa Nui society. 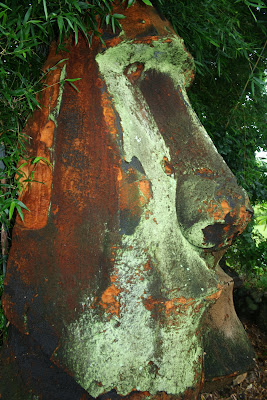 At the site of my discovery the Moai are incontrovertibly positioned as guardians of the forest. Therefore the "conventional wisdom" that the Rapa Nui consumed all of their natural resources in a frenzy of statue-building, with little regard for the trees that once covered their island, goes right out the proverbial window. Remember you saw it here first, and I hope you don't mind that I don't want to tell you any more until I have had a chance to talk to some of the scientific journals, and maybe even Time and Newsweek. 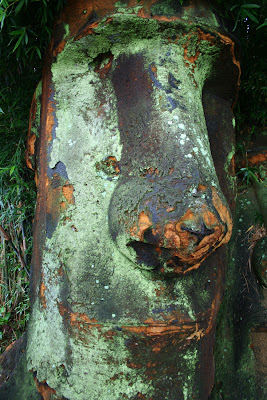 (Update: My euphoria was short-lived. The owner of the Hotel Otai informs that these Moai are his personal property and were given to him by Kevin Costner in recognition of his work in the transportation department on the set of Rapa Nui, the movie, a Costner production that made it to US theaters for a whole week, before sinking into oblivion faster than an actual Moai would if pushed out of a rowboat. They are made of styrofoam sprayed over a rebar frame.)

HEY! Just catching up on your life before I leave McMurdo on Saturday--last flight. Quiet, very disturbingly quiet here now in Mac Ops. I enjoyed your Hooked commentary, the photos sans beard, the crabby writings from Easter Is. Be well! I'll post some first sunset photos later this week on Down and Out. Cheers-- tm