Last weekend my friend Kara roasted a sixty-pound pig for a housewarming bash at her new digs upstate. Serving an entire roasted animal might seem extreme, but since Miss K has moved into a cavernous six-thousand-square-foot disused creamery, it felt somehow appropriate. 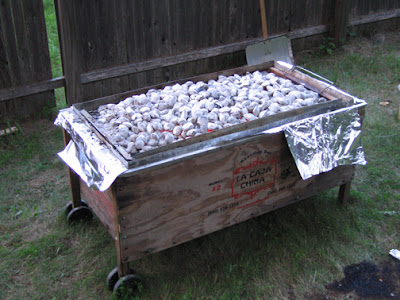 I like to cook, but that much bacon was a daunting project, and no sooner had she floated the idea than I began repeatedly begging out, mentioning early and often that I refused to accept any responsibility for a pig-roast gone wrong. Nonetheless, I agreed to broker the loan of my neighbor St. John Frizell's caja-china. A plywood box, lined with zinc and big enough to hold a whole pig, the caja-china is supposed to be a fast, sure-fire and idiot-proof method of roasting a massive slab of meat. I have been twice honored to enjoy pork roasted in St. John's box just two doors down the block, and found it absurdly delicious on both occasions, but Frizell is a maestro artisanal bartender, an accomplished host and a culinary wordsmith who weekly contributes his expertise to the Bon Appetit blog at Epicurious.com. In short, he is a pro whose successes in the roasting of multitudes of porkers can by no means be taken as an indication that mere mortals, even using the same technology, might dream of achieving satisfactory results. My plan was to foist the box off on Kara a couple of days in advance and then drive upstate on Saturday afternoon just in time to arrive, plate in hand, as the pig was being dismembered and served.

Things don't often work out as planned, however, and when K arrived I detected a snag. Although she was driving a new upstate-compliant SUV, the caja china, once dug out from under the rubble in my neighbor's yard and wheeled out onto the sidewalk, was much larger than I had remembered. It wouldn't fit into the enormous car. Somehow I was being sucked into the vortex of pig-roasting against my will, but there was no other solution. On the Saturday, rubbing my bleary eyes, I rose at dawn, strapped the box into the back of my petite, antiquated, but fuel-efficient little truck, and headed for the highway.

In the meantime, the previous evening, the early-arriving upstate posse had meticulously injected every square inch of pig fleisch with brine, a mixture of sea salt, maple syrup, and water. Upon my arrival I found the carcass, bloated and clammy and curled in the bottom of a barrel underneath a few bags of ice. Michael Herstand and I lifted the pallid beast free and laid it into the wire rack of the caja china. The pig is sandwiched between two heavy wire grids, which are then cinched together with baling wire before the whole contraption is lowered into the box. Within minutes we had sealed it up, and with the help of some cedar kindling hooped from Michael's woodshop, we had twenty pounds of charcoal briquets smoking in the metal lid topping off the box.

Cheered on by Camilla and Hamilton pere, Joey, syringe in hand, mainlines a brine of salt, maple syrup and water into 60 lbs. of raw pork splayed out on the cement floor of the creamery

It was at this stage that the first of many kibitzers wandered over, and drawing on extensive knowledge of the laws of thermodynamics and the tenets of Newton, pointed out that it seemed odd and even improbable that the pig would ever cook, the charcoal being on top, and the pig underneath. Indeed, like plumes rising from Three Mile Island, the whiffs of smoke and shimmering rays of heat coming off of our box were visibly dissipating in the air, wafting off on the breeze, warming the globe, perhaps, but not our entombed swine. I realized then why I generally prefer to cook on top of the stove where I can see what's going on, rather than inside it; the instructions for the caja china

proclaim in large letters that the worst possible cooking error one can make is to peek into the box in mid-cook. Like rice, swine-in-box must not be disturbed; the pig must be left alone, unmolested, untested, unprobed and unseen for a full three hours in its personal sweat lodge. It was, to say the least, nerve-wracking. We sat and drank beer and stared blankly at the box, as if, like Pandora's, it might hold some magical secret within. We endlessly debated the physics of the thing. Each new arrival at the party stopped by to comment. Most, before even saying hello, said things like how strange, or it's really quite counterintuitive, isn't it, or where's the pig? Where? Under the coals? Good luck! (I wonder if it isn't too late to make dinner reservations....)

Michael and I prepare to remove the sputtering, crispy pig from the box

Begone! Signaling like an airport traffic controller, I politely urge all women and children to get out of the damn pig-path

At one hour gone we piled an additional ten pounds of charcoal on top of the box and headed off to the swimming hole for a blissful bath, trying to wash away the anxiety and uncertainty of this stressful experience of blind cooking-by-faith. With two hours gone we piled on yet more coals. The passing crowds of guests began to ask questions that suggested they were getting restive. Is it almost done? What sort of time do we think we might actually be eating? Are there any snacks? (I didn't realize the invitation was for Sunday breakfast....)

At two hours and fifty-nine minutes Michael and I put on welding gloves. It was the moment of truth. On the count of three we grabbed the metal handles of the coal tray and lifted off the top. Inside was a golden-brown, crispy masterpiece. A full quart of bubbling pig fat sizzled in the chest cavity of the beast and the box emitted an enchanting aroma. Reaching in, we lifted the pig free and flipped it over, pouring the boiling lard back into the drip pan. The back of the pig was disturbingly flaccid and pale, but we laid it back down, this time skin side up, and after clearing the ash pan, replaced the top for a final half hour of crisping. 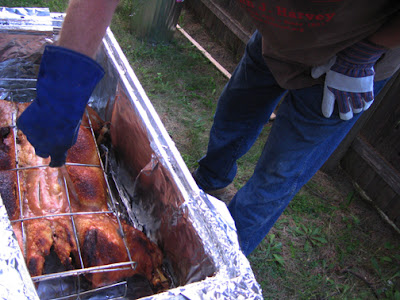 Sensing, or perhaps scenting, the action, the troops now began to bunch about the table like, dare we say it, pigs gathering at the trough to await the evening slops. Only a few more minutes, we promised. The skin crisped, the pig removed, we snipped away the wires to free it from its rack. Tender, moist, falling off the skeleton; there was virtually no carving needed. Faced with hot, roast pork, we discovered, mankind returns to a primeval state. Channeling prehistoric hunter-gatherer instincts the guests descended on the steaming pile of flesh, ripping at it with their bare hands, and splattering their Prada with grease, as if our species had never invented tools. And if no one found time for a fork, no surprise then that at this crucial stage in our narrative there were no digital cameras to be found capturing the demolishment of dinner.

Fresh back from a post-pork nocturnal trip to the swimming hole, an unidentified beast dives back into the trough for more tasty morsels of swine.

A note about Photo Credits: In the excitement, euphoria and confusion of pig-preparation and consumption I'm not really sure anyone knows just who snapped what. I took none. My thanks to all those who contributed.

Having benefited from some freshly shaved pork wedges smuggled into Red Hook I do have to say that this was most likely the best and juciest pork I've ever had. Adding gravitas to this assessment is the fact that I'm from Bavaria, pork capital of the world.

The aging 'rents, now happily installed in Paris, can also attest to the excellence of this particular porc-en-boîte. It was very good indeed--what there was of it.