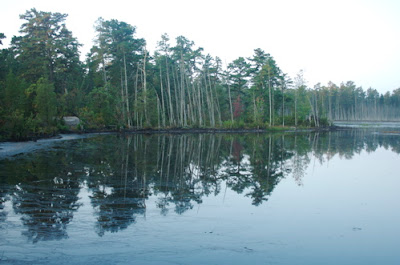 My brother Luke, miraculously back in the United States after months spent learning to speak Ningatu in the upper Rio Negro of the Brazilian Amazon, skyped me last week to propose a weekend camping and canoeing excursion to New Jersey's fabulous Wharton State Forest. New Jersey bashers and the tellers of "what exit?" turnpike jokes have likely never ventured into the southern third of our home state, and its expansive and sparsely populated pine barrens, vast tracts of scrub oak and pine forest cut by meandering coppery-red streams colored naturally by the tannins of the cedars that grow on their sandy banks. It is truly beautiful, a piney oasis in the midst of the northeastern megalopolis. Automotive superhero Joe Atlas offered to join and bring along a superior bottle of plonk, priced, he said, in the triple digits, a gift from a financier relative. Although current scientific research, not to mention a day recently spent cycling around Napa Valley from one tasting to another, suggests that there is little or no relationship between price and taste when it comes to wine, I don't often have the chance to prove this to myself at the upper end of the spectrum. In an attempt to do Joseph's hoarded bottle justice, I spent Friday night producing a boeuf bourgignon (with a $7 bottle of wine from LeNell's) to be brought along for some fine al fresco dining, and on Saturday at midday we rendezvooed with Luke at Goshen Pond, just upstream from Atsion Lake. 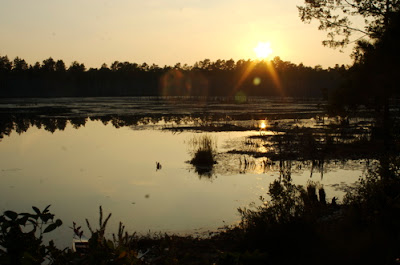 My brother and I have been twice before, and canoeing is always a major part of our Wharton Forest wilderness experience, so while I busied myself erecting the tents, Joseph and Luke took off in the F150 to go and see about a boat. They returned fifteen minutes later and forty dollars poorer with a keel-hulled aluminum beater rented to them by a curmudgeon so unwilling to do business that he gone so far as to ridicule the proposition that one could canoe in Goshen Pond at all, so clogged with snags, downed trees and beaver dams it was, so he said. But as Luke had negotiated a full day rate for a rental beginning at two that afternoon, and including the proviso that we have the boat back without fail by eight-thirty the next morning, I was too busy ridiculing his lack of business acumen (I believe I compared him to a naked Amazonian savage recently emerged from the jungle and being fleeced by a real estate speculator) to pay much attention to the ancillary report on the navigability of the local waterways. 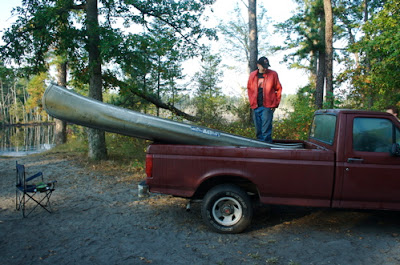 It was a balmy October day, the sun warm overhead when we set off, 620 pounds of manhood in a canoe ominously labeled "max load 580lbs." The glassy, reflective waters of the placid pond divided and subdivided into narrow channels as we weaved amongst the lily pads and the standing carcasses of inundated trees. Not a sound was to be heard save the chirping of the birds and the swish of the paddles pulling gently through the water. Soon to this peaceful soundscape was added the crunching of tortilla chips, the slurping of salsa and the grunts of exertion of the weekend warrior unused to the taxing paddle stroke. And then, some hundred yards into our epic journey, we ran aground. 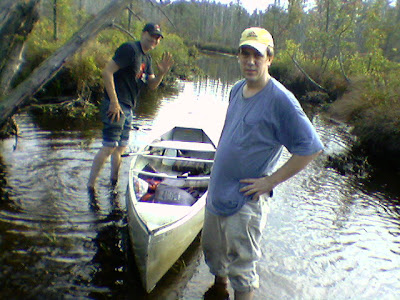 Our attempts to propel ourselves the way one might on a sled stuck in the snow, by pressing our hands against the bottom of the lake and scootching forward, proved futile. Rolling up our trousers we disembarked into the chilly ankle-deep water. There was nothing for it but to push. The sandbar was only a few feet wide, however, and soon we were back aboard and paddling onward. And soon, too, we disembarked anew, to negotiate the second of a seemingly infinite collection of obstacles, from sandy protrusions to massive felled logs and murky gummy clots of rotting leaf mold. With the campsite still in view, I protested that I preferred to walk in the water rather than sit down and stand up and clamber in and clamber out every few moments. I'm too fat for that and my movements are having a deleterious effect on the stability of our conveyance, I observed magnanimously. It was clear that we were not to reach the mighty Delaware River that day. 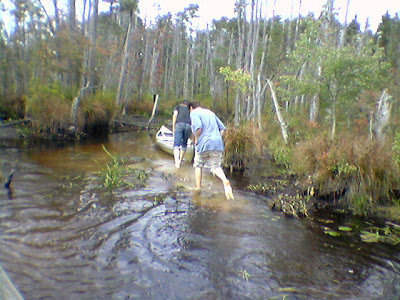 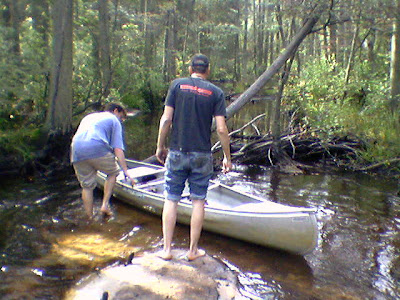 Disembarking at beaver dam number 34B. 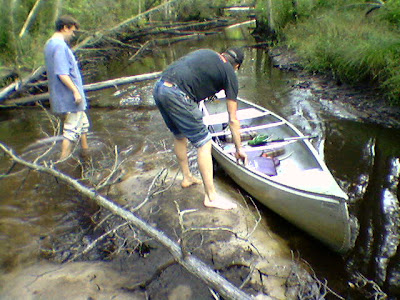 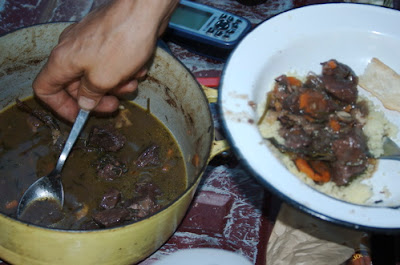 After being rescued by a passing helicopter, the boeuf bourgignon, served over couscous on the tailgate of the truck, tasted mighty fine. And Joseph's bottle of wine was insane!

Hey, dudes! That looks like one mighty fine pot of stew. And I am sure you realize that the official Detroit name for the color of that handsome F150 truck is "Burgundy".

you needed to borrow the we-noh-nah ultralight...it seems to have the supernatural ability to hydroplane swamp muck.