having inspired us to make more of an effort to buy local produce, we've headed up to the Grand Army Plaza farmer's market on each of the last two Saturdays to purchase grass-fed lamb, post-organic turnips and delicious buttery butter direct from the friendly farming souls who slave away upstate making the stuff. Grand Army Plaza is only a couple of long blocks from the Brooklyn Museum, so on our last visit we wandered over to see what was on.

In its last days, but well worth a look, is their two floor exhibition of contemporary Caribbean work. Although a bit hit or miss, and suffering from the apparent, unforgivable omission of Port au Prince's Grand Rue artists, the show has a few killers that you really shouldn't let pass you by. It may be my own personal bias, but the most wicked stuff, in every sense of the word, is out of Hispaniola.

Few of you, perhaps, have steamed, sailed, or rowed across the Mona Passage, the straight separating the Dominican Republic from Puerto Rico. I crossed it once on a passenger ferry and found myself to be the only tourist amongst several hundred emigrating Dominicans. The Passage is to the DR what the Straights of Florida are to Cubans: a dividing line between the comforts of home and desire, a mythical body of water, perilous and shark-infested. Should one dare to cross, the untold riches and wonders of the American dream await.

While the Coast Guard, which in the north Caribbean has essentially become little more than an immigration interdiction navy, seem focussed on Cubans and Haitians trying to reach Florida, the route for Dominicans trying desperately to make it to Nueva Yol's upper Manhattan heads east, to Puerto Rico. A clandestine ferry service of vessels known as Yolas makes the treacherous run. Once in PR the Dominicans blend in, scam a picture ID, and grab a jet north. While reading of a wall to keep out Mexicans, and the repatriation of Haitian boat people, we hear in the press almost nothing about the Dominicans or their route, inspiring those more conspiratorially minded to see yet another immigration policy hypocrisy, but no one in Santo Domingo is unaware of the yola flotilla or the greater meaning of the Mona Passage. 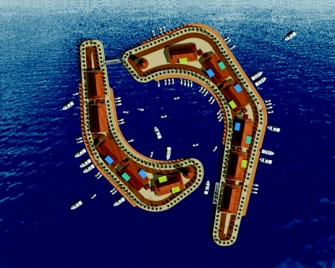 The Colectivo Shampoo proposes, via a prospectus typical of the sort found advertising an as-yet-unbuilt Caribbean resort of unparalleled luxury, the "D'La Mona Plaza," an opulent shopping mall and amenities center, to be constructed on a man-made island slap in the middle of the Mona Passage, in order that those undertaking the arduous yola voyage might have a place to pause and purchase, to amble through pavilions of Prada and take some refreshment. Complete with the sort of cheesy logo one associates with lesser golf courses, this imaginary architectural installation includes a three dimensional video proposal intercut with what appear to be real, bemused, Dominican news reports on the project, presumably in response to a press release publicizing this exciting but bogus investment opportunity.

The most genius moment is near the end, when the blond morning teevee babe comments on the cheesiness of the project's name, indicting her own Dominicans' taste with the question why does everything in this country have to have an apostrophe?

I thought you had to have balls to be a big fat white dude and wander about the streets in lederhosen, but having visited Munich I'm now aware that it is common for people routinely to rock the leather shorts without any irony, stigma, or self-consciousness whatsoever. Not so for Haitian-American-German artist Jean Ulrick Desert, who manages to raise more questions about national identity and race just by pulling on a pair of suede britches than most people consider over an entire lifetime. He called his project Negerhosen. Now of course my German isn't so good, but my understanding is that schwartz translates as "black," while neger is the precise German equivalent of just what you think it is. 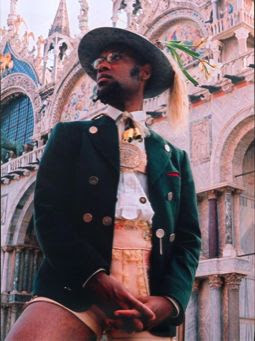 Jean Ulrick Desert, traditional German man, in another image pirated from elsewhere on the web

Jean Ulrick, tired of being denigrated, as it were, sick of being treated as a second-class citizen, pulled on the lederhosen and went on his merry way, documenting the reactions and interest of his fellow man, who were as amused and intrigued to see a gentleman of color sporting the national costume as I was to discover shops full of the shorts lining the streets of Munich. The brilliance of this is that while lederhosen may not be as common today as the three-piece suit, there is nothing extraordinary about encountering someone wandering about a Bavarian beer garden in a pair of them--only tourists like myself would be likely to whip out a camera and snap away--unless the man wearing them is black, in which case the sight is remarkable. Desert documented his outings wearing lederhosen in simple snapshots, on which he then writes matter-of-fact journal entries describing his friendly encounters with the German public. The result is a powerful but non-confrontational exposure of the limits of equality and identity in today's Germany. One needs little imagination to apply his findings to the wider world.

You're right on. Although Schwartzer is a yiddish expletive for black people, Schwarzer without the t is the German word for Black. Only recentely lefties started to say Afro-German (or Afro-American), which still has a forced PC ring to it.
In some areas (like Bavaria) Neger still has kind of a folksy undertone, especially when spoken by somebody with a heavy regional dialect. Which only shows that people with dialects tend to be racist in a kind of folksy way.
And yes, Germany still has a long way to go. Subconcious racism and philo-racism is rampant. From everyday conversations to Germany's number 1 TV host Thomas Gottschalk, who sprinkles his show 'Wetten Dass' with racist and mysoginist jokes that would get him fired anywhere but Limbaugh style talk radio in the US.

Dude, I hope you didn't think I was picking on the Germans, at least not any more than usual.... We, uh, have a long way to go over here too. We just don't have anything quite so cute as lederhosen to put the whole thing into relief.

Naaah, you can pick on Germans as much and long as you want to. Ya know, I am. The conservative party is currently running an election campaign in Hassia by fearmongering and rallying against young foreigners who live here. Not even Lederhosen will put that one into relief.