As the illusory "value" in the stock market swirls clockwise down the proverbial toilet our Zimbabwe correspondent writes in to put life in perspective, noting that "we reckon the global crunch will easily be absorbed by Zimbabwe without a flicker."

Our conversation ended when the electricity in Harare was unexpectedly turned on: "great excitement I have electricity so must rush and do stuff!! I think it is called the Stockholm Syndrome when you are so grateful to your kidnapper for letting you have electricity for a nano-second."

The IMF, not usually quoted here, estimates that inflation in Zimbabwe is now running at 150,000% per annum.

Well its been a helluva year already. Just recovering from tick bite fever I got over Christmas on holiday in the lowveld. A fabulous cheap lodge on the Save overlooking a lush green Gona Rhe Zhou that we couldnt get to due to the rising waters. It has been the mother of all rainy seasons with Mozambique awash with the Zambezi waters. And all the crops now collapsing in the fields. I woke to the mother of all headaches and couldnt move which I felt was a bit much for flu. Anyway the great black festering hole in my stomach is slowly going but the fever still lingers. 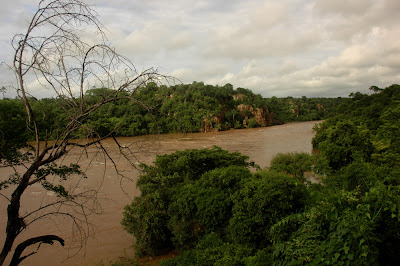 The Save River in Flood 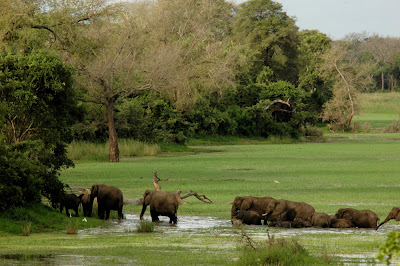 Two Elephants were swept away in the flooding


We now have the 10 million dollar bill. That would be 10 trillion if you put the zeros [removed in the course of devaluation] back on again. So we now have the reintroduced 200,000, the 250,000, 500,000, 750,000 and the 5 million and 10 million. All looking rather similar and in short supply so endles queues of people waiting to get their money out the bank. The governor of the reserve bank blames the banks for not getting to the reserve bank fast enough to take out the cash. I have yet to get a note higher than the 750,000. [currently worth about twenty cents at the street market exchange rate]. 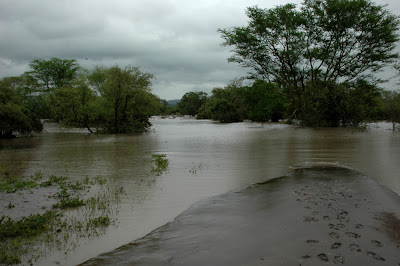 Impassable road in the lowveld (All Photos: Mafushwa)

Anyway I now have a headache again, more malaise than tick I expect. Probably because of the bank queues and empty shelves.

Which country are you in?