Reading: The American Way of Death by Jessica Mitford

Dead men make poor negotiators. And the bereaved, feeble comparison shoppers. For more than a century the American funeral industry has been exploiting the tendency of grief to overwhelm and undermine rational consumer behavior by hiding their inexpensive coffins out of sight, promoting embalming, suppressing cremation and misrepresenting the little-known laws pertaining to the disposal of 'the loved one,' as Evelyn Waugh called his scathing novel about the business of death.

It was reading Waugh that inspired me to pick up Jessica Mitford's non-fiction classic on the subject, The American Way of Death. It is an exhaustive autopsy of the death racket, a book that incisively disassembles an industry of dissemblers into all its corrupt and co-dependent parts. The funeral director, the florist, the cemetarian real-estate speculator and the crematorium all receive at least a chapter's worth of the Mitford treatment. 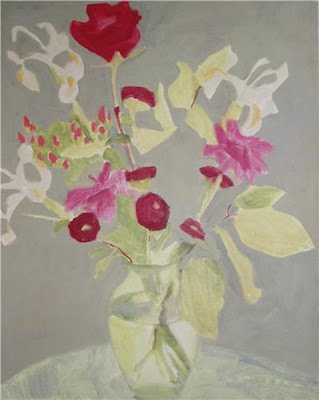 Even by the standards of today's snarky and irony-soaked reportage, Mitford's book is a masterpiece of pointed sarcasm. The quotes she extracts from conversations with a less media-savvy generation of morticians than our own are delicious:

"A funeral director in San Francisco says, 'if a person drives a Cadillac, why should he have a Pontiac funeral?' The Cadillac symbol features prominently in the funeral men's thinking. There is a funeral director in Los Angeles who says his rock-bottom minimum price is $200. But he reserves to himself the right to determine who is eligible for this minimum priced service. 'I won't sell it to some guy who drives up in a Cadillac.'"

The price of funerals is set, as the French would say, selon la tête du client, based on the look of the client, who, being dead, finds it challenging indeed to protest that he or she would prefer something simple, inexpensive even. 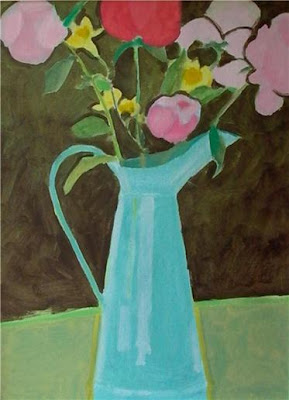 Consider the proposition that a typical funeral director might make to you, the stricken widow, once you have pulled yourself together enough to drop by the parlor and "see about things." More than likely this calm professional, intimately comfortable with death, and with comforting, will say to you of course we all know that poor Frank deserves nothing but the best. Here, in the funeral director's very first sentence, sympathy and the commerce of luxury are indissolubly linked. Who, of those likely to be down at the funeral parlor making the arrangements, would be bold enough to disagree, to argue that Frank doesn't deserve the best, or that even if he does, he nonetheless wouldn't want you wasting his pension on it? Even the possibility that Frank was a heartless, cheap bastard is unlikely to come to light in the face of the soothing and cooing of the casket salesman.

This simple dynamic is the foundation upon which the exploitation perpetrated by the death industry rested when Mitford researched her book. By many accounts little or nothing has changed, although anecdotally cremation seems to have become much more popular. But this is not a one-liner of a book. Mitford discovers, after much digging, that almost any money or dignity-saving alternative you, the "client," might suggest, has been anticipated and derailed.

Want to be cremated, wrapped only in an old bedsheet? Your survivors are likely to be authoritatively informed that this is illegal. It probably isn't, but should they have the backbone to stick to this demand of yours they will need good luck finding a crematorium willing to burn you up unless you are in a casket. After all, who literally sends the crematoria their customers?

Should those arranging your disposal dare to suggest to the local newspaper that the death notice request a charitable contribution to your favorite charity in lieu of flowers, they will find this is against editorial policy, meaning that a powerful coalition of florists have lobbied against anti-flower obituaries, threatening to withhold advertising from the paper. 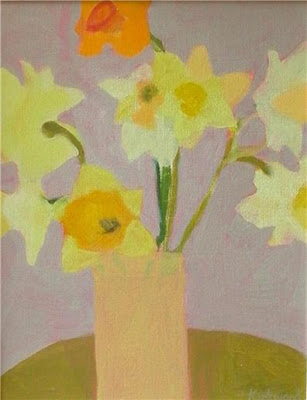 Prefer not to be embalmed, Frank? Don't want to go to the grave with your veins full of formaldehyde? Are you as unwilling to wear mascara in death as you were in life? Good luck. Your widow will be told that quite apart from keeping hubby looking good, embalming is a necessary hygienic precaution to protect mourners and funeral parlor employees alike. This is hogwash, but since you only died yesterday those who are going to lay you to rest may not have had time to fully familiarize themselves with the state statutes pertaining to the disposition of corpses.

My apologies. Corpse isn't a word you are likely to hear used to refer to your cold body. As Mitford puts it, "a whole new terminology, as ornately shabby as the satin rayon casket liner, has been invented by the funeral industry to replace the direct and serviceable vocabulary of former times." The success of this linguistic initiative is evident in her very first example. To those us of still living in the twenty-first century, an undertaker remains in the public imagination only as a character in a western. Even mortician, which Mitford, writing in the early 1960s, identifies as one of its replacements, has now been almost completely abandoned in favor of funeral director. Honestly, I'm not sure what today's evolution of the term corpse is; are the dead at funeral parlors (never mortuaries) still referred to as loved ones? Or has a new euphemism poked its way up through the ashes? 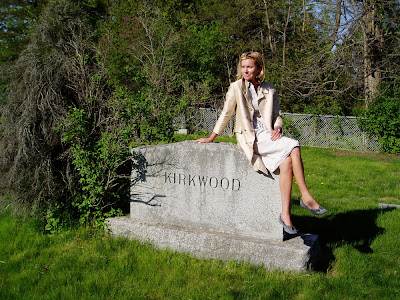 By happy coincidence, or providence, that fabulous painter, the ever elegant Cynthia Kirkwood, aka "La" Cynthia, of the mighty Don Flan, sent belated New Year's greetings just as I was wondering how to illustrate this post. Here "I am in Blair, Ontario," she wrote, "visiting my Aunt Stephanie who took me to see the family plot, where we have by far the biggest and most handsome headstone in the place. Apparently I have a place reserved for me if I want it!"
Photo: Stephanie Kirkwood Walker

That Mitford's last literary enterprise before her own death in 1996 was The American Way of Death Revisited,

might be taken as an indication that in forty years little has changed beyond the semantics. There is no reason to believe that in the future death is any more likely to be a bargain. It may be hard work for you, and I'm hoping it won't be any time soon, but I want to make it perfectly clear that when I do go you should give away any useful bits, wrap me in some old newspaper like a serving of fish and chips, and then incinerate, pulverize, and scatter.

I LOVED the original book and it was very important to me. The remake has gotten more mixed reviews, mostly because readers can'tr figure out if the antecedents are from the original time period or the more recent one.