...this island's historical mission is always to be starting afresh, to make a new beginning every thirty or forty years, and oblivion is usually the ointment for all the wounds which are still open....
---Alberto "the Marquess" Marqués

There's nothing much better than a good detective novel to ease the pain when you are wallowing in bed, befuddled by Cepacol and Motrin and drowning in chicken noodle soup, as I have been for the last three days. My tonsils are as red as the crimson-washed cover of the book I'm holding in my hands, which depicts the deceased, transvestite face of Alexis Arayán, alienated fruitcake son of a leading Cuban diplomat, found in the Havana woods, strangled, wearing a long silk gown. And that's without sharing the more sordid details. 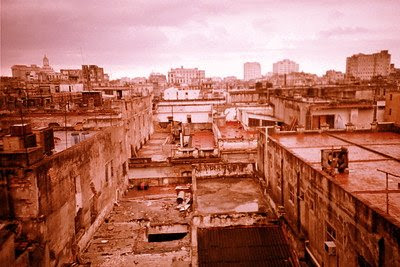 Arayán's creator, Leonardo Padura Fuentes (Bitter Lemon Press, his publisher in English, has inexplicably opted to drop his maternal Spanish surname, as well as making other questionable, presumably marketing-driven decisions, such as renaming the four novels of his Havana Quartet after colors) is arguably Cuba's most interesting contemporary writer. The success of his work at home and abroad gives one hope that the writing environment in Havana is not as closed down and closed off as one might imagine from perusing the headlines of Granma, Cuba's leading daily dose of regime cheerleading. Padura is not a writer who praises the revolution; instead he takes as his subject matter the daily compromises and contradictions encountered by anyone attempting a contemporary Cuban livelihood, and many of his characters and situations can only be seen as oblique and not so oblique criticisms of the status quo.

Padura's detective, Lieutenant Mario Conde, holds his own with the greatest of the genre. A perennially single, frustrated writer, perhaps a version of Padura himself had Padura taken a different path, he swears constantly, smokes vile Cuban cigarettes, and drinks too much. At work he and his partner cruise the scorching hot streets, from the crumbling ruins of Centro Habana to the mansions of Miramar. He spends most of his free time with an obese, ruined and wheelchair-bound Angola veteran named Skinny, a metaphorical personification of the waste and anguish of Cuba's African military adventures. Skinny's mom cooks for them an incredible array of culinary delights unheard of in contemporary Cuba, constantly manage to wangle pork chops here or a steak there. She roasts entire turkeys. Conde, despite his sleuthing skills, can never comprehend how she gets her hands on such ingredients.

originally published as Mascaras [Masks], Conde's collaborator is the geriatric Alberto Marqués. Proud to call himself queer, once a famous theater director, he was purged in the notorious 1971 crackdown on homosexuals. (That this shameful episode was one of the first to demonstrate the moral failings of the revolution, alienating supporters around the globe, is by no means irrelevant in this story). Marginalized ever since, he is a bitter and wasted figure who invokes Artaud and leans heavily on his memories of hanging out with Sartre in Paris in the late sixties. Conde leaves his cop partner sitting in the car while he goes in to have long chats in the Marquess' dank lair, all the while asking himself if he is letting things get icky. I could go on, and tell you who the killer turns out to be, thereby providing yet another illustration of Padura's dextrous social criticism, but that would spoil things. It is, after all, a detective story. 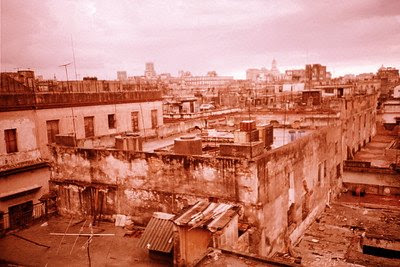 The redemption of those marginalized in one way or another by excessive revolutionary fervor is a theme running through both Padura's fiction and nonfiction writing. For instance he is one of the few (perhaps the only) Cuban writers to have come to New York to follow the path of salsa, the latin music rooted deeply in Cuban musical tradition but so often politically opposed to, or at least estranged from, Castro's Cuba. In Faces of Salsa,

he interviews, among other luminaries, Mario Bauzá, a figure of tremendous importance who essentially invented latin jazz, but who, by virtue of never having been back to Cuba after the revolution, was almost forgotten on the island. Left for dead, one might say.

I owe my introduction to the Havana Quartet (when it was only a trilogy) to my good friend Alex, who left a mangy and well-thumbed Cuban volume in his house in the mountains of Puerto Rico, where I found it while living there and digesting my own Cuban experience. After reading it in one go I called to say 'please send the rest,' and I remember us wondering at the time why nobody had yet discovered Mario "the Count" Conde and brought him to America. While it is unfortunate that the English title ignores the themes of theater, Greek tragedy, Artaud and the deceptive public face of more than one of the book's characters that are made explicit in the word Mascaras, this is still a translation I'm happy to see.

I have Jean-Claude Izzo's first book in "The Marseilles Trilogy" for you before I split town (L says you received "A Flag for Sunrise," right?).
I also have the Library of America's two-volume Raymond Chandler collection. I'm debating which volume to bring: the earlier writings or the later writings.
Any suggestions? There's not enough room for both (because you know "Moby-Dick" is coming with me too!).