Somewhere, a village is missing its idiot...

Some future brain-surgeon from Finland was so impressed with the majestic Moai of Easter Island that he decided to take an ear home with him. The Guardian quotes the Finnish consul in Chile, who we imagine usually has a pretty relaxed time of it. One pictures a difficult day spent sucking down pisco sours, while pondering the fundamentals of Finno-Chilean solidarity. She suggests that "it was a sudden, impulsive crazy idea. He is sorry and surprised that it has caused such a stir. He really regrets his actions." Sorry and surprised that it has caused such a stir? I'm sorry and surprised that she didn't try to claim that it was not really such a big deal since, after all, there are 799 ears left. 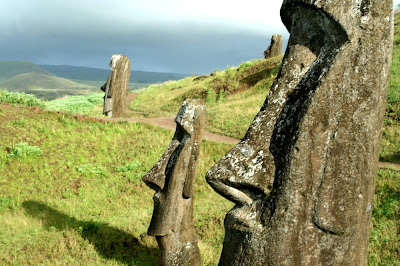 Okay, you thought we were stern-faced before? Now we're really pissed

Email ThisBlogThis!Share to TwitterShare to FacebookShare to Pinterest
Labels: chile, easter island, throw away the key

This countryman of mine has been lynched high. There were more column meters published on the death of Princess Diana than there were on the invasion at Normandy. Soon there will be columns on the massive Buddha statutes annihilated by the Taleban regime than column meters on this earlobe of the moai statute. (1 out of 400-1000, the blood thirsty media does not even bother to check the number. Nor the proportion how many of them lie in the ground. Indeed, why climb when one could get a piece from one that is already knocked down?)

And as I read the actual story behind the News from Congoo to Australia, it seems to me that he's not proven to break it by purpose. But you don't figure that out by reading these genious' news services. One lady shouted that "A tattood guy came, ripped off the ear, stole it and ran!" And our brilliant investigative journalists recycle the hearsay to about 500 million people.

A high-octan, adrenaline addict adventurer climbs on a top of a high and sacred monument. Bad enough. The Finn brokes the ear of this fragile lava type of stone. Worse enough. My countryman tries to hide it and runs away. Worst enough. (OK, Oll Korrect, he confessed what happened later on.) But this does not prove him a thief though the whole globe would shout and shoot so!

It was the Easter week at the Easter Island. The same week the Finnish leaders of the Botnia pulp factory at the border river between Uruguay and Argentine were on trial in a South American court for "Planned damage". After Finnish flags had been burnt in the streets of Argentine for 3 years for this biggest investment ever to the poor country of Uruguay. We have a classical scape goat and red herring here, it appears to me. Not every tattood boxer is suffering from Dementia pugilistica. In Finland we enjoy extreme sports, but the aim was not to vandalize it appears to me. So now we know we should prefer Tibet over the highest 22-meter Moai for climbing. That I want to apologize.

Raging mob wanting to lynch a man is an old scene, only the internet phenomenon is new. A raging mob behaves irrationally when it goes out to lynch. In AOL News, 52% out of 314000 would sentence him to de facto death in South American jail, without knowing whether it was an alleged theft or an accident from climbing. If it bleads, it leads.

Another viewpoint on the hang-up party:
http://www.helsinki.fi/~pjojala/Easter-island-broken-ear-mob-lynch.htm

Dear Pauli
Thank you for sharing your very interesting point of view. We couldn't help noticing, however, that whatever bizarre streak of nationalism or clannishness prompted your essay on the pitfalls of today's viral media also prompted you to leave this same remark on each and every blog post singling out your hapless, criminal countryman. Why the scattershot defense? Seven years in a Chilean prison, a penalty which seems unlikely to be meted out in this particular case, might strike you as harsh, but what punishment would you consider appropriate were I, for instance, to go on a rampage inside Alvar Aalto's modernist masterpiece of a church in Seinäjoki, desecrating the space with the intent to carry off a chunk of souvenir?
Because the Chilean powers-that-be invest the Moai with little more spiritual value than your alleged thieving vandal did, and because tourist trips to Easter Island provide the little hard currency the islanders receive, your pal will likely be spared the terminal justice that those who revere the statues would almost certainly have handed out in earlier centuries. He should count himself lucky to be able to learn from his momentary brush with the Darwin awards.

I have a Finnish family friend serving his 5 years in a South American rat hole prison. He was quilty for what happened - but this countryman of mine seems to be innocent to what he's blamed for.

One lady shouted that "A tattood guy came, ripped off the ear, stole it and ran!" And our brilliant investigative journalists recycle the hearsay to about 500 million people. So he is condemned as a thief and a vandal.

I even figured a new name for it: The Web Mob.

My Dear Mr. Ojala,
Saying that your countryman is not guilty does not make it so. The "major media," as opposed to the "web mob," quotes your own consul apologizing for the criminal acts of your friend Marko Kulju. You yourself announce that "he confessed what happened later on." If his intent was neither to vandalize nor to steal, then what, pray tell, do you propose that it was? Why not give us some evidence, web-based or otherwise, that your man did nothing wrong? Or are you merely charging about the web pimping your dinosaur and mankind coexistence theory? (They say when a man argues with a fool both are involved in the same enterprise, and I have to say I'm beginning to wonder a little bit about myself.)

"...your own consul apologizing for the criminal acts...You yourself announce that 'he confessed what happened later on.'"

You are playing devil's advocate there. The consul was apologizing the climbing, the guy confessed that be broke the ear. I clearly stated this impression I've got, you just did not want to listen.

You know yourself that it is a totally different thing than to break something by purpose. So you quoted Bible:
"If a wise man contendeth with a foolish man, whether he rage or laugh, there is no rest." Proverbs 29:9

It takes two to tango: I may be a fool, but there is still the wise man lacking. Ku klux is what I hear from the raging web mob.

And here's one for you as a warning:
"Whoso mocketh the poor reproacheth his Maker: and he that is glad at calamities shall not be unpunished." Proverbs 17:5

That may be just about enough of this for one April the first. Perhaps we need to wait and see what further developments ensue in the case of Mr. Marko Kulju and his alleged misdeeds.