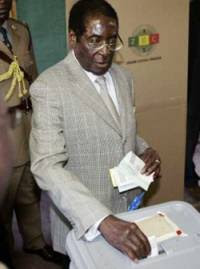 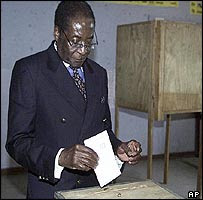 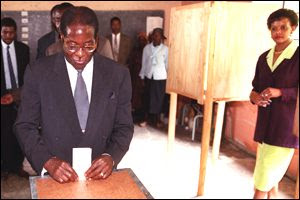 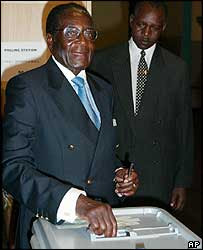 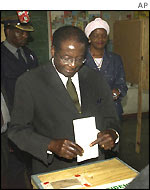 Zimbabwe is trapped in post-electoral paralysis as the Zanu PF forces of Robert Mugabe appear incapable of believing that they will successfully steal the latest elections from Morgan Tsvangirai's MDC. Our Zimbabwe correspondent writes:

Ironically MDC [opposition party Movement for Democratic Change] appear to have landslide win according to independent observers and number crunchers based on results posted outside polling stations despite massive gerrymandering. However, being the MDC, they have no strategy or plan B and seem unable to mobilize. At the rate state media are going it will take 4 days to announce Bob the winner.

But the rumours are excellent. Grace [Mrs. Bob] is in Malaysia with the kids. Bob is in South Africa. Bob is busy with security chiefs planning to crush any defiance. People are driving to the border. Military on high alert. Military divided. Military about to plan a coup. Military united behind Bob. Enough to make one eat pizza and drink.

(Images of Bob voting courtesy Google image search, shamelessly stolen from AP, the BBC and other major media. If you feel your copyright has been unfairly infringed pick up the phone now and give us a call with your cease and desist order. Operators are standing by, eagerly waiting to hear from you at 1-800-LITIGATE. Call now to take advantage of this one-time-only offer!)

UPDATE: Late on the evening of the day of fools our correspondent, usually irrepressible but now sounding to us rather battered and beaten down, sends these further words:

It's enough now. Running around to press conferences that never happen, swamped by rumors, watching the state machinery gain ground as we all somehow imagine that some sense will prevail. I think Bob will declare himself the winner and say 'fuck you all.' I still harbor some hope but it is dwindling fast into the cynicism of previous election defeats. I was black listed -aka white listed - from covering the elections, for a byzantine number of reasons that left me in a state of enraged defeat. A good meal would not go amiss, along with a proper night's sleep.

Much as we would like to bring our correspondent in for some much needed R & R, the story is still unfolding.

Nice enterprise reporting, Don Flan.
Wish you were here to buy me a goodbye drink!
I'll see you South of the Border, down Mexico way--soon, I hope.