A special offer, from our elite "collectioneur series"

Our exclusive images of these particular Zimbabwean "Special Agro-Cheques" (so named just in case anyone was suffering under the delusion that they are actual currency, backed by gold or even just the good will of some fictive, notional, national reserve) come to us courtesy of our fearless correspondent in Harare. As I predicted, they have arrived only just in time to be made (even more) worthless, by government fiat. Today the Ministry of Overworked Printers, as we are now referring to the financial arm of the government, apparently concluded that to spiral upwards into the hundreds of billions was taking their giddy affair just a bit too far.

The new $10 bill, or is it a "1"? I can't keep it straight. The government this morning decreed that life would be simpler and more wholesome for everyone if they were simply to lop a dozen or so zeros (noughts) off the end.

A mind-f#*k of a cash day, notes our correspondent. The rate is now 12.5 as opposed to 125 billions (Zim dollar to US dollar). We can still use the billions, sorry, $1 note, until the end of December. New currency not available, and there is still a shortage of the good old billions. They should have just removed the first three digits and dealt in noughts.

Nothing in the shops. Shopping means driving to obscure addresses and seeing what people have stored in their garages. Beer from one, fish from another, and twenty liters of fuel to get around. Stella Artois and fish for supper. Crisis, what crisis? Last night's Chinese food was a trillion, or $15 US.

Just off to trade eggs for sugar. Catch up later. 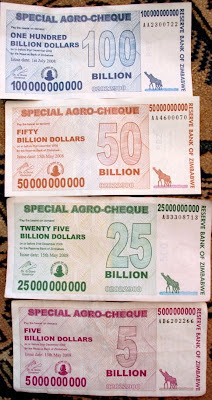 Rounding out the collection, the balance of the defunct billions.