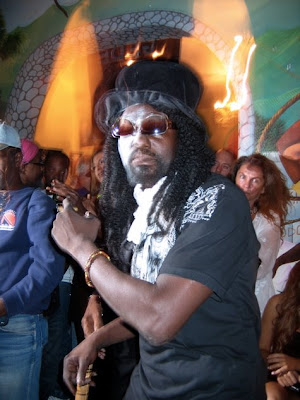 "Gede is always dressed in black, usually with a tail coat and top hat. (He) has special prerogatives. He does not fear criticism. He flouts propriety at will, he embarrasses, provokes, and insults with impunity." Harold Courlander

Not so in Haiti (or Mexico), where November 1 has lost none of its syncretic significance; even the youngest child knows the day is dedicated to visiting the buried ancestors in the cemetery, and the night to fêting their collective memory with a grand party to which those very ancestors are in fact invited.

The annual November 1st ceremony for Gede is among the most important festivities in the vodou calendar. Papa Gede, or Baron Samedi, as he is also known, is the guest of honor, a rude, often obscene and uncontrollable guest, whose presence is required for the fête to be called a success. Maya Deren, whose book Divine Horsemen

remains, sixty years after her extensive research, among the very best explanations of all that transpires in the world of vodou, calls Gede "the master of that abyss into which the sun descends." 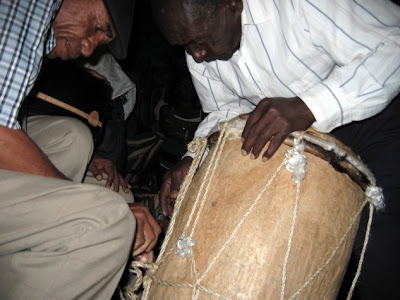 Tuning up the drums at Tap-Tap; once the retaining ring holding the goatskin against the top of the drum has been hammered down tight, the hemp cords are knotted and cinched to preserve the proper tone.

On November 1st I was in Miami, and so, dressed for Gede, I made my way to the Tap-Tap Restaurant. The eatery, named after the colorfully painted pickup trucks that serve as public transportation the length and breadth of Haiti, is the de-facto epicenter of Haitian culture in South Beach, and the famed houngan Aboujah was in the house, with drums, drummers, and dancers standing by to throw down in honor of the Baron. Soon the back room was thronged with dancers. 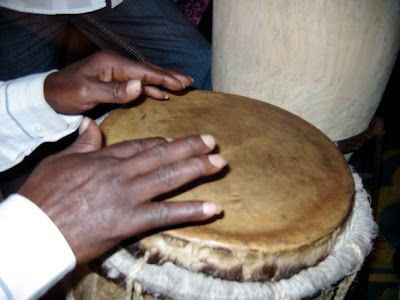 At about ten o'clock, with quite a number of apparently bemused tourist diners still dotted about the room enjoying their Caribbean desserts , the thunderous drumming began, along with invocations to Legba, the guardian of the crossroads and the gateway to the spirit world. He is the first spirit to be greeted in any ceremony. As Maya Deren puts it, Legba must be consulted to reach divine counsel, in the same way that Gede must be consulted to reach ancestral counsel.

One of the many appealing aspects of vodou is that the religious calendar and the social calendar are one and the same; the ceremonies are first and foremost parties, full of rum and music and dancing. They just happen to be parties to which visitors from the other world are invited. It is strange to us, perhaps, to throw a party to celebrate death itself, but Gede, a priapic, gluttonous lecher, is, in being death personified, therefore also a living negation of death. As Deren puts it, "the cosmic abyss is both tomb and womb." This may be why Gede is so obsessed with his own sexuality, and often arrives humping and thrusting. Deren claims that in her experience it was always those most prudish who received the most sexually aggressive treatment. The presence of blancs, or foreigners, at ceremonies invariably brought out Gede's suggestive side. "Whoever would consider sex as a sin confronts, in Gede, his own guilt," she noted. Little surprise, then, that generations of missionaries to Haiti have tried to steer people away from the culture of vodou. 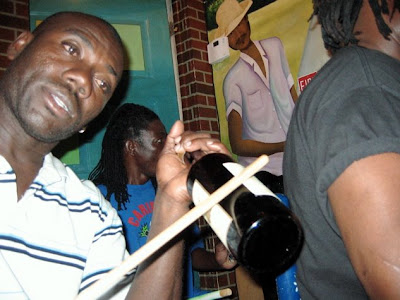 Barbancourt Rum bottle in use as percussion instrument 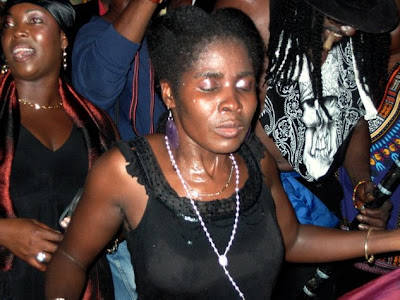 It's getting sweaty in here! 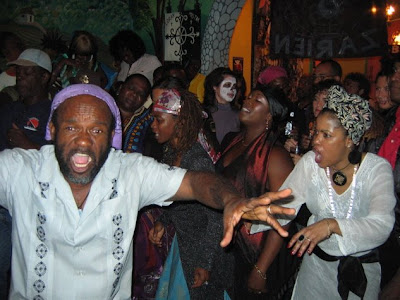 Gede's colors are purple, black and white. Baron Samedi is the leader of the tribe of the Gedes, of which there are many, both recognizable and too obscure to be named. It is impossible to identify them all, and in fact, the way it has been explained to me in Haiti, the extended family of gedes appears to be a sort of sub-pantheon of spirits that includes all deceased ancestors. 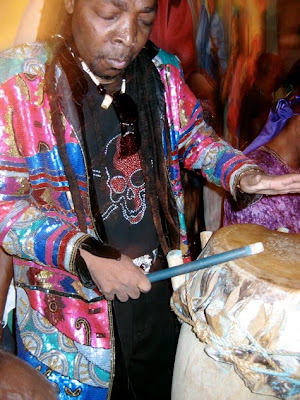 The drumming was intense, physical work, but there always seemed to be a reservoir of fresh drummers in the crowd, ready to sit in and take a turn. 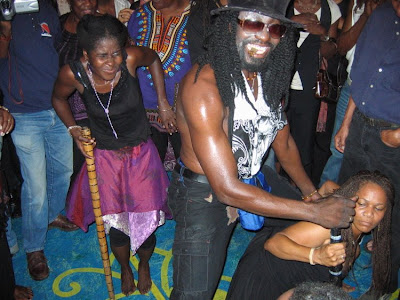 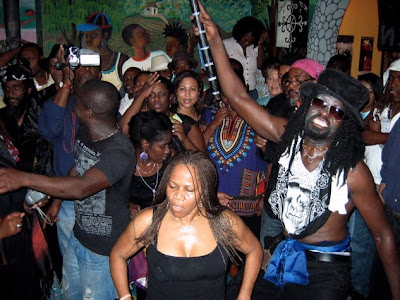 Wave your stick in the air with festive abandon! 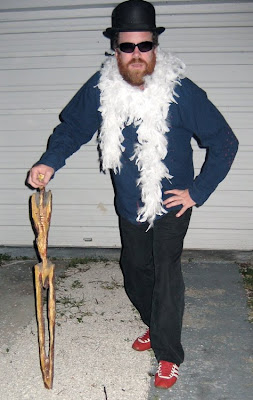 I was staying in Miami with my friend Jody, who has never thrown away a single Halloween costume. She lent me this fertility cane, bowler hat, sunglasses and ostrich feather boa for the evening. The anthropologist Alfred Metraux writes of the Gede that "from some angles they look terrifying, from others merely ridiculous," but I'm fearful that I only achieved the latter. The bowler doesn't have quite the Freudian oomph of Baron Samedi's traditional stovepipe top hat, and I'm afraid I ended up looking more like a fey Charlie Chaplin than a corpse-like guardian of the cemetery.

Hi! I'm so interested in different places in the world. I was wondering if you would mind sending me a couple of pictures of any of the awesome places you have been so I could post them on my blog. I'll give you all the credit. I just want to have pictures of places all over the world. If you would be willing to, I would greatly appreciate it. Thanks for the post. =)

I found your blog a few weeks ago and I'm making my way through the posts. Just wanted to tell you that I enjoy the humor, the education and your quirky (yet highly insightful) perspective.

Ok, a bit off topic: Yesterday afternoon I found myself in front of the Sci Fi channel watching the 1982(?) remake of the movie, "The Thing" (with Kurt Russell). I thought of your blog and your adventures since the entire story line centers on a group in desolate Antartica. I actually didn't care for the movie and was disappointed by the ending. I mean I sat through 2 hours of creepy, nightmare enducing special effects hoping that it would conclude on a more interesting note. Oh well.

The movie did, of all things, spark my interest in Antartica and those who are driven to explore this harsh, mysterious and beautiful continent.

Keep up the great work! I'm on my way to search for your book.

I just noticed I incorrectly spelled ANTARCTICA (leaving out the c... Ant arc tica. Geez, that is a bit embarrassing. I am terribly dyslexic (can I use that as an excuse)? Well, I did get that it is a continent :)