A special message for our european readers who have televisions UPDATED

Those on the refined old continent tonight at 11PM should watch Anne Aghion's "Ice People" on ARTE, the franco-german co-production channel of arts and cultural programming. That is the film I recorded in Antarctica, and the original raison d'être for my launching this blog.

At least, it's on in Germany at 11PM; elsewhere, check your local listings for showtimes. 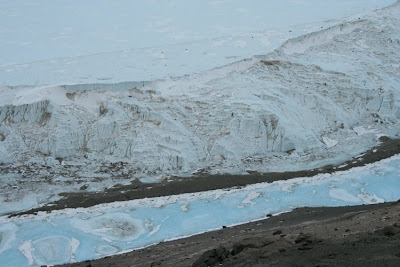 This morning the Suddeutsche-Zeitung, Munich's answer to the New York Times, published my account of working on the film, and they have a tasty slideshow of my images online as well. Unfortunately I don't read German myself, so I can't tell how badly my timeless prose has been savaged by translators and editors. I eagerly anticipate the reports of those learned readers with the appropriate language skills. (I grasp enough of the begriff, as they say, to note that the detail that we were unable to wash for seven weeks was the single hardship most disturbing to the Germanic sensibility, and was therefore elevated to headline status: 51 Tage Ungewaschen) 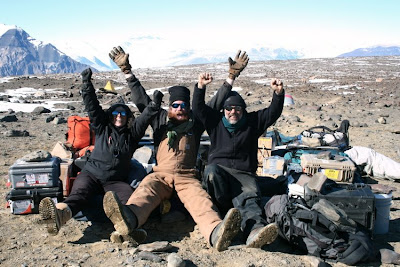 Our happy film crew only a few hours before our first shower in 51 days: Anne Aghion, moi, and Sylvestre Guidi

UPDATE: Making fun of online automated translation is a bit of a cheap shot, but please, share the chuckles. Here's what I wrote and emailed off to Germany:

The work of filming goes slowly. It takes hours to get started in the morning. The conical Scott tents, like yellow canvas teepees, have no floor; there is no such thing as mud at these temperatures. In the morning it is impossible to imagine crawling out of the thick negative-40-degree-rated sleeping bags without first fumbling to light the Coleman Gas stove next to the cot, getting a hint of heat into the air, and then dangling the Baffin Expedition boots over the flame to melt the ice in the toes. Ice that was yesterday’s perspiration.

That was then translated into German, by human professionals. I then dropped the German into Google Translate, with the following result:

The work on the film has been slow. Morning, it takes hours to be worked out. The cone-shaped Scott tents, tipis yellow pulp, have no land; something like slush there is not at these temperatures. Morning, it is inconceivable, in view of minus 40 degrees from sleeping bags to peel, without the momentary gas stove beside the bed alight field to have at least a touch of warmth in the air to feel. The expedition boots on the fire must be kept so that the ice melts in them, which derives from the sweat of the day is formed.

I am glad you typically take showers more often. But it seems like the lack of moisture, or the frozen moisture that existed, would end up not being too stinky. Or was it?