A Bicycle in every Port, Part One (REDACTED)

People, and by that I mean primarily men, sure are funny about their vehicles. Perhaps the cherishing of vintage cars and the fetishization of motorcycles is a kind of evolutionary relic left over from the gratitude, grain, and soothing words we once lavished on our horses. Personally, I have a comparable fond spot in my memory for almost all the bicycles with which I have ever had an intimate relationship. There was my first ten-speed, the pale green Fuji on which I learned to race, purchased with months of salted-away allowance. The classic Italian steel Pinarello I ride now is bright red, like the convertible sportscar of a man in a profound midlife crisis. It is the bicycle I drooled over in my teenage years but couldn't dream of affording. Slowest by far, but no less cherished, is the one-speed Flying Pigeon I rode across Cuba, from Trinidad to Santiago, through weeks of unremitting headwind. Leaving it with a family at the end of the journey was heart-wrenching. I tried to make them promise they would care for it as I had, and allow me to come back, for visits.

But bicycles come and go. In New York the old saying is that you never really own a bicycle, you only rent it, until it is stolen and you are forced to return to the bike shop to "rent" another one. As a lover of bicycles, what shocks me more is how often they die of abandonment and neglect. The world's cities are full of mangled tubular corpses permanently affixed to lamposts and no-parking signs. Countless mouldering, rubber-rotted, dust-crusted orphans are left rusting in basements, storage rooms and courtyards just because their owners can't fit them in the moving van or be bothered to fix that flat. 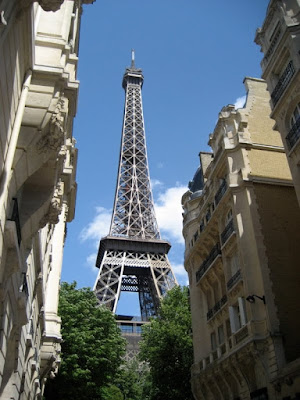 I've only just noticed that the Eiffel Tower looks like a giant vuvuzela, set down on its business end

I found one like this three years ago in Paris, a once-stately Dutch city-bike, forlorn and forgotten and coated with ochre dust. Both tires were completely flat, the rubber cracked and brittle. I disapprove of theft, of course, but bicycles are a bit like pets; when they have clearly been abandoned by their owners, what crime can there be in washing them off, showing them some love, and taking them for a walk? Keeping in mind the Paris spirit of 1968, perhaps the same year this antique had been manufactured, I liberated her. 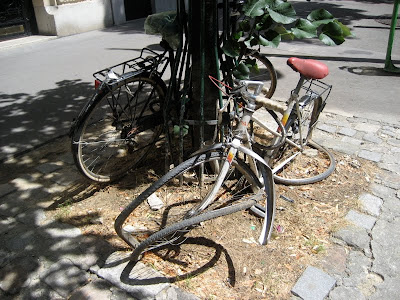 Under all the dust, my Dutch was a satiny black, a classic tuxedoed beauty. Little can go wrong with these stolid, one-speed cruisers, and in no time at all, after a petit investment in a new set of whitewall tires and a few drops of oil, I was gleefully pedaling her through the rues and avenues of the left bank. I bought a lock, the cheapest I could find. The bike gave me weeks of faultless transport. When I left Paris, I gave it to my niece, Sophia, hoping to introduce her to the joys of urban cycling. I tried to make her promise to care for it as I had, and allow me to come back, for visits.

My niece's building made no accommodation for bicycles, so we locked the bike across the street in the courtyard of another apartment building where my parents had briefly rented; we knew the key-code for the front door, and imagined that no one would be the wiser if we parked it there temporarily. In any case I was sure that once Sophia got the hang of it she would soon be riding to school, and to cafés, cherishing it and generally getting such good use out of it that it wouldn't need a permanent home. That was three years ago.

Two years ago, I asked Sophia, via trans-atlantic skype, if she was taking good care of my baby. Was she riding it a lot? Caressing it, polishing the brake calipers and whispering sweet nothings in its ear? Feeding it the occasional sugar cube? Things got a bit quiet at the other end of the internet. "Well, I did paint it, one afternoon," she said, finally. I took a deep breath, and said nothing. "Yeah," she went on. "My friends and I spray-painted it yellow. It looks kind of cool." I said goodbye, exhaled, and closed my laptop. Horrors and sacrilege! The mere thought of it was unbearable. How dare she? I tried to continue my New York life as usual, but I was living a poisoned quotidian existence of bitter denial. Eventually, after months of struggle, during which I undoubtedly drank too much and snapped angrily at my loved ones, I managed at last to put the whole sordid business out of my mind. Picking up the shattered pieces of my broken avuncular dreams, I moved on. 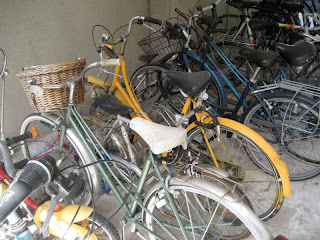 Quel horreur. If I wanted a taxicab, I would stand in the street with my hand out.

Last week I got an email from an antarctican acquaintance, my friend Traci Macnamara. She used to wish us good morning on the Motorola radio from MacMurdo Operations, when Anne Aghion, Sylvestre Guidi and I were camped in the remote wilds of the Friis Hills. Every day at 6AM it was obligatory to put a call in to "MacOps" to announce that all were healthy and accounted for, and often Macnamara was on the other end of that call. We kept vaguely in touch, and from time to time since leaving Antarctica I have checked in on her blog. In northern hemisphere life Macnamara is an accomplished writer and adventurer. Unless she is making it all up, she is the sort of woman who lives for months on end in a tent in a remote Rocky Mountain encampment, goes solo off-piste skiing deep into the wilderness, and pulls her way up vertical cliff-faces in the French Alps with her fingertips. I knew that for her latest little jaunt she was planning on "fast-packing" her way across Europe, retracing Wordsworth's journey from England to Switzerland on foot. Whereas for most people going to Antarctica is the adventure of a lifetime, for Traci it's just a day job.

I was flattered when Macnamara referenced my book in her email. It's the story of an overweight and out-of-shape slog across Cuba, and for those of you who haven't read it, I don't think I'm spoiling anything by telling you that I fell lame with a blown knee after four days of hiking. Ultimately I procured the bicycle I mention above. "Here I am in Paris, thinking of you," wrote Macnamara. "After 7 days of near heat stroke in the wheat fields of northern France, I developed tendonitis in my left ankle. I'm sitting here with a bag of frozen peas on my leg, dreaming of finding a bike over the weekend so that I can continue this warped journey in some manner...."

Suddenly, memories of my beloved Parisian ride came rushing back. For all I knew my niece had by now completely dismantled the bicycle and sold the parts on eBay in order to buy Gauloises, but at this stage, I couldn't bear to ask. I was thinking only of the bike and how it could still be saved from the terrible death of neglect. "I have a bicycle you might be able to use," I wrote back to Traci, somewhat optimistically. "It is locked up in a courtyard on Avenue Suffren, a few hundred yards from the Eiffel tower." I had only vague hopes that this was still true. "I imagine it would need new tires and a good going over by a bike shop." This last bit, although perhaps an understatement, seemed less of a stretch. "Let me know if you are interested."

To my embarrassment, she wrote back almost immediately: "Seriously???? I'm absolutely interested!!" It seemed I would have now to reveal what we might politely call the vagueness and uncertainly surrounding my offer. Namely, the probability that the bicycle had long ago been removed by a fastidious concierge and carted off to the dump. By coincidence, my sister, the mother of my nefarious, spraycan-wielding niece, was stopping by for lunch that very afternoon. I wrote Traci that I would ask for any and all details, and explained that I hadn't actually seen the poor beast myself for almost three years.

I really only needed two things in order to save face. One was the key code to get into the courtyard, and the other was the key to unlock the bicycle. No sooner had she sat down at my luncheon table than I made my poor sister call her daughter. The news was not good. My ingrate niece had no memory of the key code and had not visited the poor and affection-starved bicycle in at least a year and a half, since doing a "very, very ghetto job" of painting it. Her keychain, containing the key to the bike lock, had been pickpocketed from her only a few months ago, while she was sitting in a bar, guzzling kir and smoking Gitanes. It was hard for me to complain about the loss of my key once my sister informed me that as a result of the same crime she had been forced to replace her own apartment's front door lock to the tune of €1600. I gathered that Sophia is unlikely to receive any more allowance until her eightieth birthday, but this was but a small consolation.

"Bad news," I wrote to Traci. "Nobody knows nothing. No code, no key, no clue. Take my advice, forget I ever even mentioned it, and have a look on eBay.fr for something used and reasonable. Sorry to have gotten your hopes up." 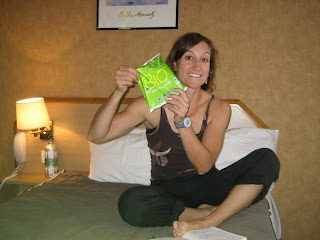 Traci Macnamara, soothing her disappointment, and her tendonitis, with a frozen bag of organic peas.

If my friend Peter could put his essays into a book "Let's See" I think these blogs are are worthy, and I'll have a copy, thank you. You are a master with words.

this is most probably THE stupidest blog i've ever read! I will agree to the fact that it is quite well written but it remains completely useless in the way that nobody cares about whatever is written in it. It is only showing the over-exaggerated reactions of a man as he sees people mistreating metal assembled pieces...such reactions (anger at his own niece for simply adding style to a useless bicycle) clearly shows the simple-mindedness of the person who simply cannot get an interest smarter than bicycles.
In other words, this man IS a dick and should ACTUALLY find some real purpose to his life.

@anthony Thanks for the praise!
@john Wow, you're a tough nut! If this is the stupidest blog post you've ever read, I'm thinking you must have missed the worst poem ever written about mustard, a couple of posts back. I thought that one was much more completely useless than this one. In terms of purposeless dickishness, really, this post can't hold a candle to it. But thanks for stopping by and spending some of your free time with us. And taking the time to comment. We always like to get comments!