The Great Screech-In, part the first 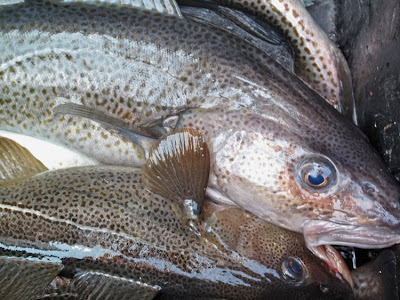 In his fabulous book, Cod: A Biography of the Fish that Changed the World,

Mark Kurlansky outlines a triangular trade route that ran from the northwest Atlantic cod fisheries south across the ocean to Africa's slave coast, and then back to the Antilles. Sugar, rum and molasses from the Caribbean was shipped north and then traded for salted cod along the coast from New Bedford to Newfoundland. This dried, preserved fish was then offloaded in exchange for slaves in Senegal, Dahomey and Ghana, and also used to feed the human cargo on the Middle Passage to the Caribbean. There, slaves and fish were traded for molasses and rum, and the cycle recommenced. This explains why bacalao, salt cod, is still the most commonly encountered fish dish in Puerto Rico, Cuba and the Dominican Republic, all islands in the fish-friendly, but codless Caribbean sea.

I saw vestiges of this trade during a recent film shoot on Fogo Island, at the epicenter of what were once the richest cod-fishing grounds on earth, along the north-east coast of Newfoundland. Cod are almost a religion here. Although there were no descendants of slaves anywhere to be seen, I drank from a bottle of Newfoundland Rum.

Once a place where dockside fish-processing plants worked around the clock dealing with the seemingly endless bounty of the sea, Fogo is an island that has suffered in recent decades. In 1992, with cod stocks dwindling toward extinction because of industrial overfishing, Canada instituted a total moratorium on taking the species. Fogo's story since then has included a lot of underemployment, brain-drain, and a mass migration to St. John's and other larger Canadian cities in search of work. 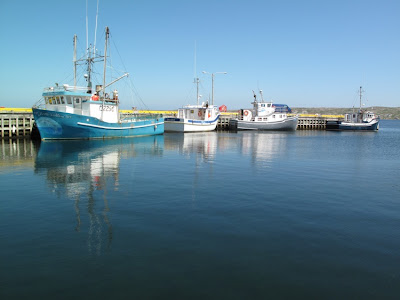 But despite the hardships the island has suffered, it is difficult to imagine a friendlier welcome than the one we received on Fogo. I cannot remember ever being more overwhelmed by the warmth of a people. I've slurped sago soup on tiny islands in Indonesia, supped on pork stew at impoverished homesteads in Cuba, and enjoyed couscous on camel-blankets spread out by Tuareg nomads under the Saharan night sky, but as far as I am concerned, the new ultimate in hospitality is being invited to eat butter-sauteed cod-tongues with Fogovians.

I could argue that this is because Newfoundlanders and I actually speak the same language, English, but it isn't true. Fogoans, or Fogies, or whatever they are called, talk with a kind of tormented backwoods Irish brogue that makes the rest of Newfoundlanders sound like a bunch of network news announcers, even though people from that province are ridiculed throughout Canada for "talking funny." Apparently linguists and anthropologists come to Fogo to learn how the Irish spoke, four hundred years ago. Cut off from the rest of Canada by a lot of water and a whole bunch of French people, Newfoundland is a kind of island nation unto itself, and Fogo is a remote island off of that island. 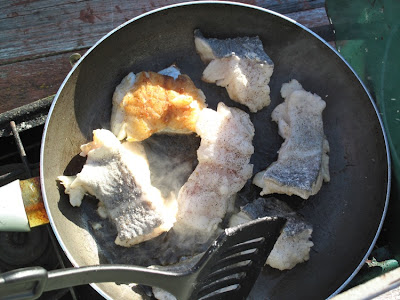 The two highest honors that can be bestowed on the foreign visitor to this remote outpost are to get to go cod-fishing with Aidan Penton, and to be "screeched in" by his brother Walter and sister Colleen. We learned that we were to receive both of these accolades on our next to last day on Fogo, when Aidan proposed that we venture out onto the high seas in search of cod. He then added casually, but rather ominously, that should we return with some fish he would then hand us over to his siblings to be properly screeched.

"Uh, screeched?" Deborah Dickson, Scott Anger and I looked at one another, puzzled. Was this some sort of strange vestigial term, a linguistic remnant of medieval Ireland?

"Well, it's about making you honorary Newfoundlanders," said Aidan. "But I kenn't tell you any more dan dat." Now Deborah and I looked at one another with alarm. Once, we had together crossed the equator on an aircraft carrier and experienced firsthand the bizarre and degrading shellback ceremony, during which newbie equator-crossers are tormented and hazed by their more senior Navy crewmen. Screeching? I pictured branding irons and fishhooks and a cod-gut massage. "Do we have to?" I asked.

"Now, don't go getting all worried," said Aidan. "You'll enjoy it. Let's fish!" Soon we were headed out from Joe Batt's Arm toward the Little Fogo Islands in an open boat, with Aidan watching for the particular alignment of landmarks that would tell him we were floating atop prime cod habitat.

Fish stocks have rebounded enough since 1992 that Newfoundland now enjoys a brief season during which cod can be taken in small numbers, exclusively on hand lines. Old-school fishing. We threw our hooks and silver jigs overboard in 80 feet of water and almost immediately started pulling fish into the boat.

Cod are "ground-fish," meaning they like to hang near the bottom, and the approved technique is to let the weighty silver jig all the way down to the ocean floor before tugging on it smoothly and swiftly, pulling it up a just few feet and then letting it back down. This is called "jigging," and the idea is to fool the cod into thinking that the metal lure is a panicked Capelin, the smelt-like bait-fish that is their primary sustenance. 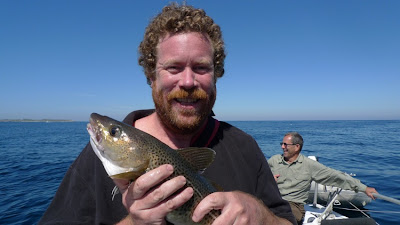 Me, inordinately proud to have caught the smallest cod of the day
Photo: Deborah Dickson

In short order we had filled a large plastic tub with cod. They are a beautiful and regal fish, as Kurlansky argues. (Those who declare that cod are "ugly" are agitators and malcontents unlikely to be made honorary Newfoundlanders). Although the temptation was immediately to indulge in cod sushi, we resisted, and instead turned back, heading for port and the unexplained horrors of the screech-in.

The moment of judgment had arrived. When got back to port, a driftwood fire was already blazing on the sloping slabs of granite beside the bay. Nestled in the red-hot coals was a large cauldron, fashioned from a decapitated propane tank. The lid was a slab of metal carved from a stop-sign. We were served beer, perhaps to anesthetize us against the coming torments. At the shoreline, Penton friends and family squatted on the rocks, swiftly eviscerating the freshly-caught cod with gleaming blades that flashed in the sun, like Capelin trying to escape. They threw the guts directly into the harbor, where gulls swooped and squabbled over the offal. 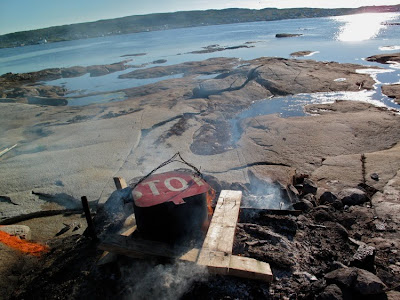 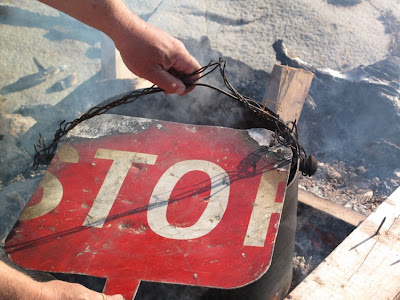 It was a grim scene. The unearthly gabbling of the gulls, the smoke rising into the air, the handfuls of guts being chucked about. What on earth could possibly be in store for us? Clearly it was to be some sort of trial by fire. Suddenly, Walter Penton emerged from the fish-gutting shack in a full set of black oilskins and sou' wester hat, like some sort of crazed Gestapo fisherman. He had a pirate's gleam in his eye, and he was puffing maniacally on a corncob pipe. 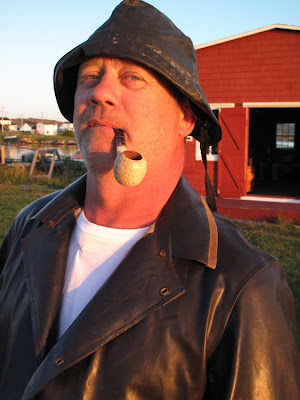 Hi Richard, Love your take on our Island life, even though I know what to expect in part 2 I am anxiously awaiting your description of the event. all the best Gail Penton