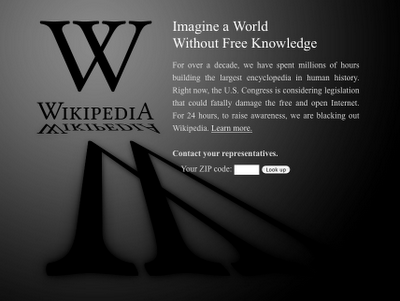 I'm too internet clutzy to figure out whether there is a way to black out antarcticiana in solidarity with today's webwide SOPA and PIPA protests, so these screenshots of major websites, all shut down for the day, will have to do. SOPA and PIPA are two pernicious pieces of legislation making their way through Washington. They would make much of what makes the internet great, illegal, such as the ability to link to any bit of information, anywhere, at any time. Masquerading as enforcers of copyright protection, SOPIPA essentially makes websites responsible for the copyright, piracy and trademark infringements of any other website that they link to. 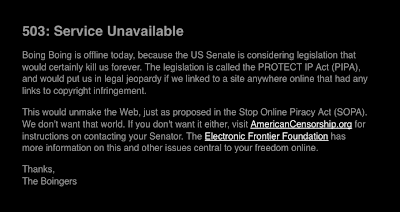 In the non-virtual world the equivalent of this would be if the police were to arrest me for giving a tourist directions to Canal Street because I might have known that the reason they wanted to go there was to purchase counterfeit Louis Vuitton bags.

This legislation would have two immediate results. The radical impoverishment of the richness of the web, and a mammoth migration of the United States information technology sector, one of our last thriving industries, to parts offshore. These laws were written by over-priced movie-business lawyers and Washington legislators whose web experience is having an assistant who checks their email for them. They have to be stopped. 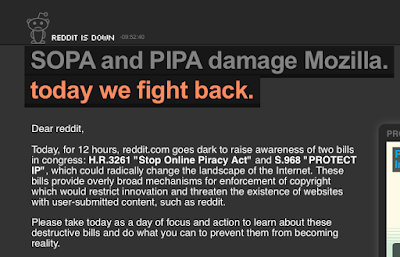 UPDATE: Amy Goodman's story in the Guardian does a great job of laying out the issues and explaining why this is really censorship legislation masquerading as an anti-piracy initiative.