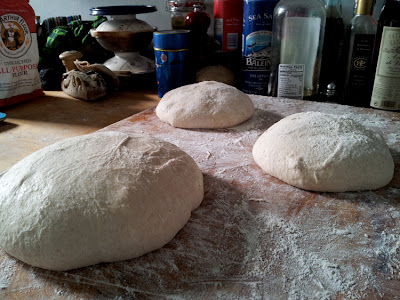 I'm attracted to superstition, but I'm not superstitious, except perhaps when it comes to natural processes. It doesn't seem to me to be black magic to feel that if the rivers are flowing and the clouds are blowing and the trees are growing as they should, then there is room for optimism. This is the source of the solace I take from the natural world, from wild places. The tide has gone out, but it will come in again. 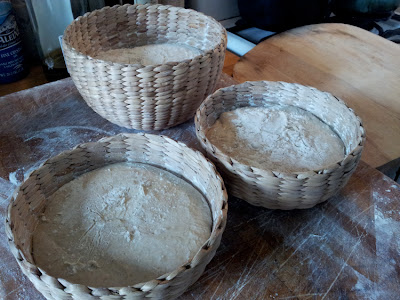 So I took it as an auspicious auguring that the loaves of bread I baked as my contribution to a New Year's eve dinner last night were, if I say so myself, magnificent. The dough behaved as I expected it to, it swelled and rose in accordance with my understanding of the natural cycle of fermentation, understanding gained after significant effort and observation and much poking and prodding of moist compilations of flour and water. This is a blow-hardian way of saying that my sourdough starter is kicking ass right now. 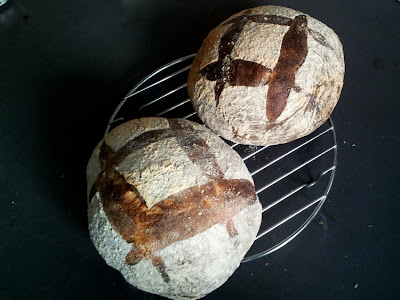 It has been months since I used commercial yeast. I have no use for the stuff. An untouched jar of it sits in the fridge in the ghetto of mouldering condiments. This bread is made from water, flour and salt, one less ingredient than the Germans allow in their beer. Unless you count life itself as an ingredient, the wild, living yeasts of the air, which find their way into the starter to feed and multiply and expand. When they are doing their job this well, it is hard not to take it as a sign that it will be a glorious 2012! 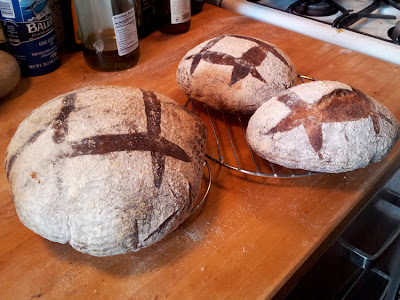 I'm not bragging, I'm just saying: I would put these loaves up against Balthazar's in a shaolin kung-fu battle for bread supremacy. I apologize that there is no crumb shot, but I didn't want to bust any of these open before taking them to dinner, and snapping pictures of my own bread laid out on the groaning buffet table seemed dreadfully gauche, even for me. Technical details in the comments.

Repeat 30 folds in the bowl every twenty minutes for four repetitions.

Refridge in the bowl, with a plate covering the top, 18 to 20 hours retarded fermentation.

Take the bowl out of fridge and place it near the oven on the countertop. Preheat oven to lowest setting. The middle rack of my tine gas oven has six fire bricks on it, making an ersatz hearth.

After two to three hours in the warmish kitchen, dump the dough on to a well-floured surface and preshape boules. (Photo one in this post). In this case I cut the dough in half and then cut one of the halves in half, to have three loaves total.

Let rest under a clear plastic bag and watch for expansion. Once the loaves are swelling up nicely, turn up the oven to 500 degrees and carefully put the loaves in well-floured baskets for final proofing. Put a baking tray in the bottom of the oven under your bricks or pizza stone. I flour the baskets with rice flour, which, as someone once put it on "the fresh loaf", is like teflon for bread dough.

Watch the baskets for renewed rising. I don't really buy the "doubling in size" at this stage--it seems like a prescription for overproofing. Once I get a little bit of renewed swelling (in this case, one hour), I bake them.

Open the over door as little as possible and put 5 ice cubes in the baking tray. Sprinkle a pizza peel with semolina and gently but forcefully overturn your first basket and get the loaf onto the peel. Slash the loaf, if you want to. Put it in the oven. Repeat, if possible. I baked these two smaller loaves together, and then baked the larger one on its own, 45 minutes later, so the rising time is fairly forgiving.

Liberally spray the interior walls of the oven to create as much steam as possible. I repeat this spraying five or six minutes later, but then don't open the oven again for at least 25 minutes (I have no window, so it is difficult to resist the temptation.

Right about now your house smells insane. You want to marry the aroma, roll around on the ground with it, make love to it, smear it on your body. This is a good time to have the realtor bring over some clients, as you will definitely get the asking price for your house if people tour it when it smells like freshly baking bread.

Generally, thirty-five to forty minute of baking time for loaves this size, until the slash marks are a deep and nutty brown color.

See you at the dojo.

I love these comestible blogs

Ohh maai...
And to think I almost did not read the comment!