Making too much of Gumbo 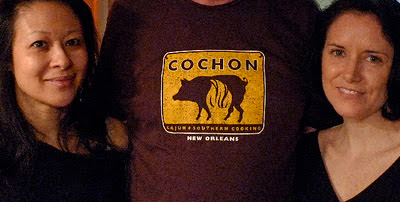 Although it was not an event officially sanctioned by the Association for the Promulgation of Gumbo, dinner at my house last night owed a lot to the founding spirit of that organization. Call it the fraternity of consumption. Never having invited twenty people to dine at once before, I was typically concerned that there wouldn't be enough food. While at this point I pretty much grasp what dinner for eight should look like when laid out on the chopping board, were two and half pounds of okra, two chickens, and my last few sticks of Laplace, Louisiana andouille going to be enough for the gathering hordes? The affirmative RSVP rate was running at about 96%. 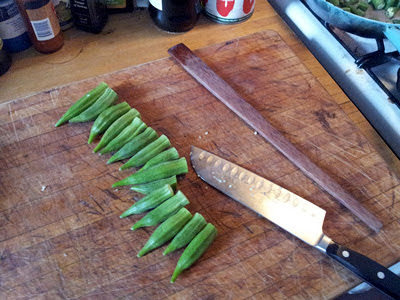 Not to worry. Despite my protestations that I had everything under control, "although a bottle of wine would be welcome, if you feel like bringing one," everyone bought food, and dessert, and wine, and I probably could have fed forty. 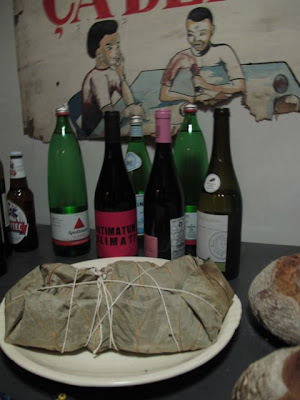 Just one little corner of the groaning board. Wild rice with a trio of mushroom species bundled up in lotus leaf, by Ordoubadi. With friends who bring platters like this to your gumbo social, you can almost get away with not even bothering to cook at all, and just blaming the lack of gumbo on a last minute scorched roux accident. But I'm ahead of myself. "First," as it says at the beginning of hundreds of Louisiana recipes, "you make a roux." 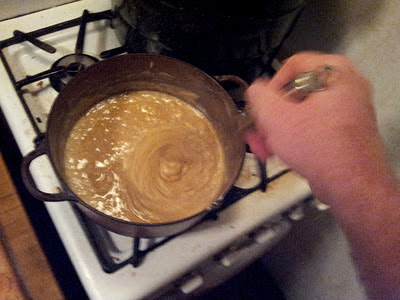 Roux, along with okra, is one of the defining, character-bestowing ingredients in gumbo. White flour, slow-fried in bubbling oil, must be whisked constantly to avoid it carbonizing and infecting your gumbo with the acrid taste of arson. Donald Link, of the brilliant Cochon Restaurant, in New Orleans, whose gumbo recipe I was following, writes that "the process of making roux can be hypnotic.... Watching the oil and flour mixture slowly change color and begin to take on its unique aroma gives you plenty of time to be alone with your thoughts." 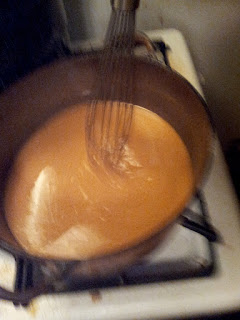 Indeed, with the narcotic swirling of the whisk, I began almost to hallucinate. The surface of  bubbling roux has the quality of primeval swamp, as if, ultimately, life may emerge from it, the product of some wondrous accident of science and heat. The world and my thoughts, reflected in this toasting caramel lake, put me in mind of that film school classic, Jean-Luc Godard's cosmos as experienced in the swirling bubbles on the surface of a cup of coffee. It's from "2 ou 3 Choses que je Sais d'elle," and while sort of fun, it is almost staggering in its pretentiousness:

It is now time to admit the artistic debt the Association for the Promulgation of Gumbo owes to Godard in its own cinematic debut from early 2011, even if our version is perhaps too minimalist to reach the same heights of pretension: 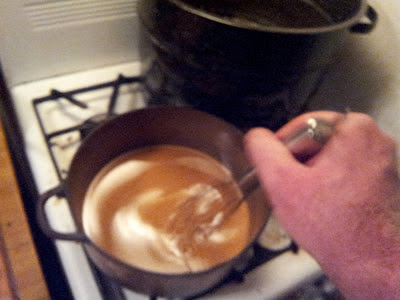 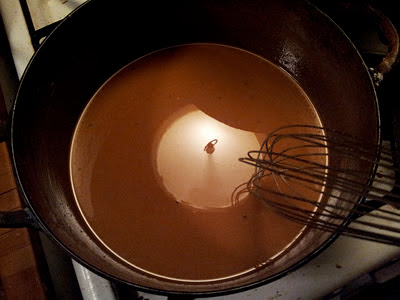 Almost ready: one wants the roux, says Link, to be the color of a dark copper penny. 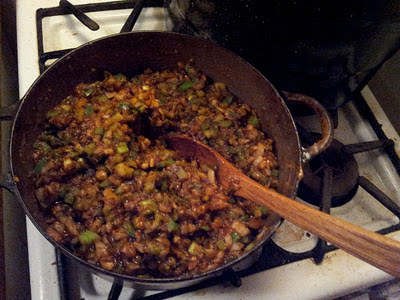 Perhaps the defining moment in the preparation of gumbo is the addition of the so-called Holy Trinity, along with abundant cajun seasonings, to the lava-like roux. This mixture of equal parts finely chopped onions, celery, and peppers is an obvious manifestation of Louisiana's French culinary heritage, for the Holy Trinity is essentially a mirepoix, with the peppers substituting for carrots. Once this flavor-base is added to the stock, the only remaining question is what sort of gumbo the dish will become. Will it be foot of pork or pile of crawdad? Back of crab or eye of newt? Just about anything can go in there, because no matter what you do next, now it's unquestionably a gumbo. 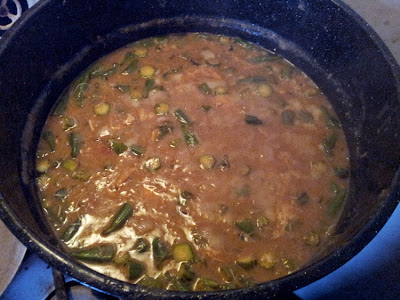 This one was andouille and chicken, cooked until the chicken was shedding off the bones into string. Last to go in is the okra, a symbol of fertility and virility thanks to many attributes, from its proud, firm shape to its womb-like interior cavity, bursting with seed and slime. Okra likely originates from Africa and was brought to the new world for or by slaves to grow and eat, and Cubans call the vegetable quimbombo, a word almost identical to various West African Bantu names for okra. Gombo, ngombo, gumbo, okra is synonymous with the dish. 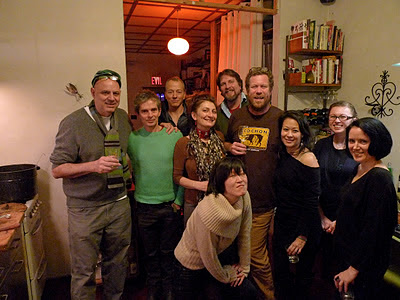 The (mostly) Manhattan contingent, the Brooklyn locals having (mostly) wandered home in a gumbo-induced stupor by this point. This and the first photo courtesy of WoWe. 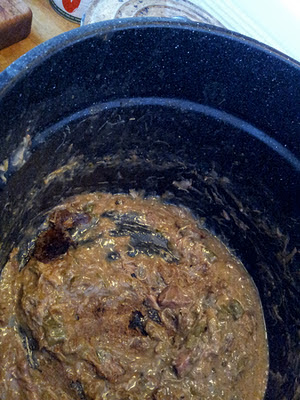 That is the bottom of the kettle you see there. Malheuresement le gumbo est terminé.