Hoist on their own Petard 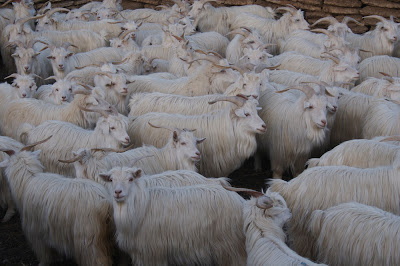 The dessicated environment in which the quasi-nomadic Gobi desert goatherd finds himself is one offering little in the way of useful resources. In a landscape of endless dunes and blowing sand even the most basic needs of animal husbandry pose a challenge. There is, for example, apparently nothing more sturdy than the spindly reeds ringing the salt lakes from which to construct fences and pens. 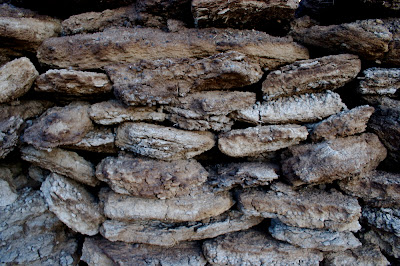 Such deprivations require resourcefulness, and looking at the goat and camel stockades of the Mongols I ask myself the same questions that spring to mind whenever I encounter extraordinary ingenuity: whose idea was this, and when did they have it? Someone, probably many generations ago, realized that the layer of sand beneath his herd became, when impregnated with dung and urine and baked in the desert sun, a sort of airy and organic cement slab, firm enough to be chopped into rough blocks and stacked. 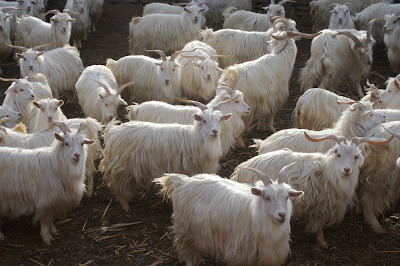 Pungent yet effective, these walls are entirely constructed from this turd-wattle, thereby collecting these splendid goats for nocturnal safety and, of course, the continued, concentrated production of more fencing material. 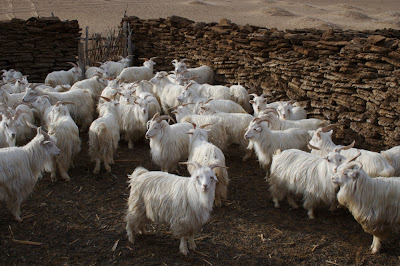 Barbequed goat is the pinnacle of Mongol hospitality, and from this herd our hosts selected two, which we enjoyed on our last night in the Badain Jaran desert, along with copious volumes of a singularly vile anis-flavored liquor called Baiju which it would apparently have caused mortal offence to decline.