Another Big Pile of Rocks

At the pinnacle of its power in the first century, the so-called Roman Empire might better have been called the "Mediterranean Empire," so completely did it encircle the Mediterranean Sea. Never before or since has one power unified the entire basin from Gibraltar to Constantinople, at least not on both sides of the sea; the Moors almost managed it, but couldn't quite grab hold of a few minor territories like France and Italy to complete the circuit.

Perhaps this is one reason why, at least outside of the kitchen, there is no experience so quintessentially Mediterranean as tramping about on an ancient pile of sun-bleached Roman ruins, the scent of rosemary and thyme wafting up on heatwaves from the baking bushes. Volubilis is no different. Here at the westernmost extremity of Rome's influence, on the foundations of the long-forgotten pre-Christian Mauritanian empire, the visitor tramples fallen olives underfoot while Moroccan goats gambol amidst the shattered pillars. Apart from the olive trees there is no shade to be found; the sun beats down relentlessly on the elaborate Roman patios and disused baths. 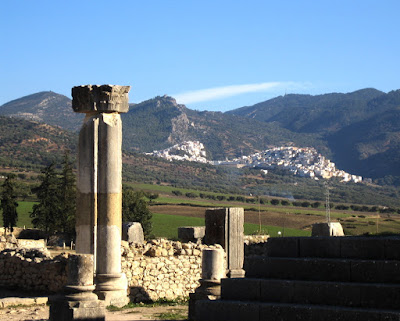 In the way that these things often seem to go (one thinks of Jerusalem), what was an important city to the Mauritanians became one to the Romans, and then in the eighth century, to the Moors. Beyond some of the pillars of Volubilis, washed in yellow Mediterranean sunshine, are the twin camel humps of Morocco's holiest town, Moulay Idriss, named for the descendant of the prophet who brought Islam to Morocco, and from whom the Moroccan royal family charts its lineage. We took a collective taxi from the city of Meknes to Moulay Idriss and walked to Volubilis from there, a highly recommended excursion. After a short scramble up the hillside at the base of the village a pleasant one hour walk leads around a spectacular bluff on a little-used road. For much of the route the archaeological site is visible on the plain below, until finally one cuts downhill through the groves to emerge on the main highway opposite the entrance to the ruins. 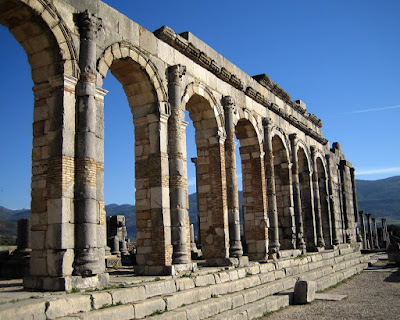 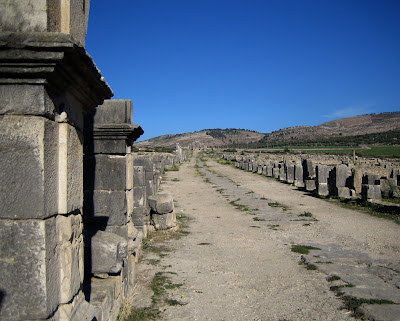 What once was the main drag, rail straight in the Roman way. One imagines the structures to the left to have been the truly posh digs of Volubilis; the floors are exquisitely tiled with mosaics. Enormous private baths abound. In fact, walking through this section, one has the impression that the Romans did little other than bathe. 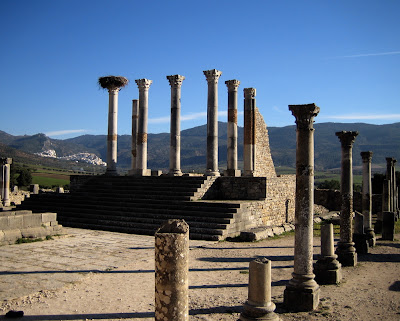 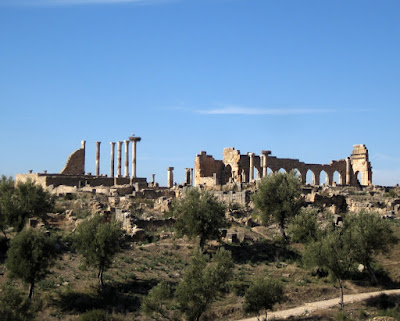 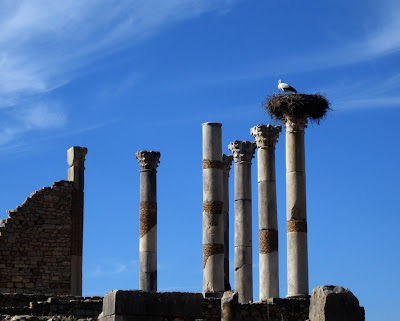 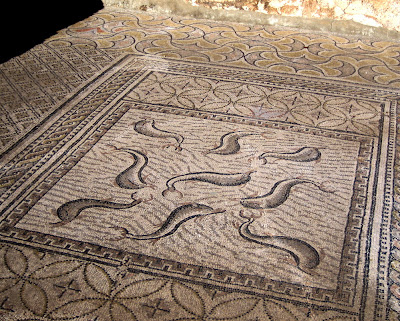 Many of the mosaics depict fish and other aquatic creatures, although the site is far from the sea between the Rif and Atlas mountains. The Romans must have been fanatics for seafood. 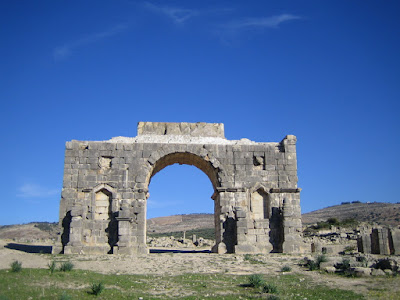 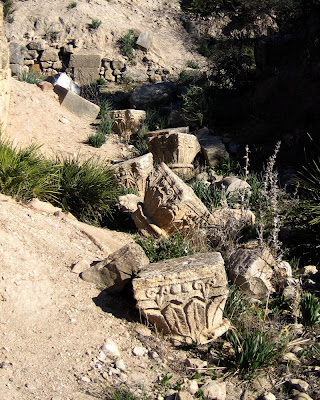 Only the merest fraction of Volubilis has been restored in any way. Wandering the hillside below the most impressive buildings, you begin to realize the extent of the city. Chunks of limestone are everywhere. Here, a gully is filled with bits of column, two-thousand-year-old construction rubble, apparently awaiting looters. 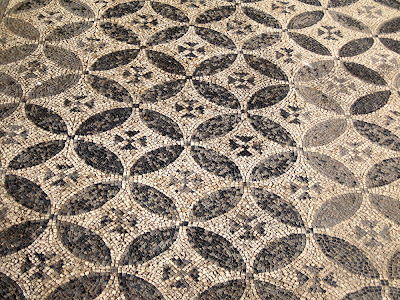 There are countless splendid mosaics at Volubilis. These patterns even seem to suggest that the motifs I earlier identified as Moorish may actually predate the arrival of Islam. Note that, although made of hundreds of tiny squares of stone, these layouts share with contemporary Moroccan cement tiles a four-part format in which two patterns compete visually for attention with one another. Do you see this as four circles? Or as four diamonds? 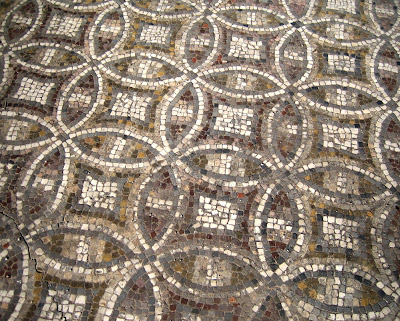 Incidentally, or coincidentally, the trail for the walk from Moulay Idriss to Volubulis begins just beside the tile-manufacturing facility I was so happy to discover a few posts ago. After taking the Moulay Idriss turnoff from the main highway watch for a blue and yellow gas station on the left. The tile factory, really just a garage operation, is immediately to the left of this, and just downhill from here a trail leads up a rubble-strewn ravine. It is only a hundred meters or so up this hill to the little-used road mentioned above. Depending on where exactly you emerge on to this road, the ruins of Volubilis should be visible in the valley off to your left.