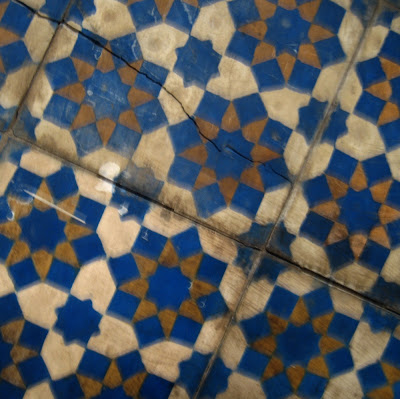 Among my various obsessions I don't generally include floor coverings, but I must admit to a passionate preference for a particular style of floor tile known to Miami residents as Cuban, to Manilans as Malaga, and called simply cement tile (carrelages du ciment) in France and Belgium. Like the pressed tin ceiling panels that mimic an ornate and intricate style of carved plaster ceiling so labor-intensive that it has all but ceased to exist, these tiles were a product of the industrial revolution designed to simulate, consistently and at a low cost, what had been the painstaking work of armies of craftsmen who laid mosaic floors entirely by hand. At least that's my theory; one of the things that's interesting about a simple but fleeting technique like that used to produce these tiles is that the history of its development and use may already be lost. A cement tile is not a Colt revolver or a cotton gin, and the more humble processes from the dawn of industry have few historians. Who invented the machine that makes them? Who determined their worldwide standard size, a 20cm square, which results in the exact measure of 25 tiles per square meter? 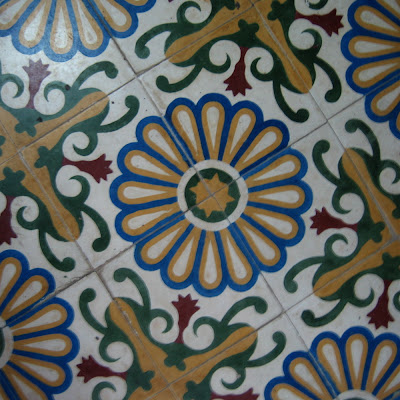 The most beautiful examples of these tiles are symmetrical with respect to only one diagonal axis, so that four of them, arranged properly, can be used to make two quite different designs. A complete floor is visually exciting in part because of the constant, unresolved tension between the two patterns.

Difficult to find today, these tiles were once in widespread use across much of the globe. I've seen them in the Philippines, in Brazil, Argentina and Chile, in Mexico, Morocco and Algeria: almost certainly of Mediterranean origin, they can only have crossed the globe in the colonial period, following the flow of Iberian peninsular power and francophone influence. I've never been to Martinique, Guyane, Angola, or Mozambique, but I would be shocked not to find these tiles there, lurking in the dark unrenovated corners of tiny shops and on the floors of once-grand, faded tropical homes. 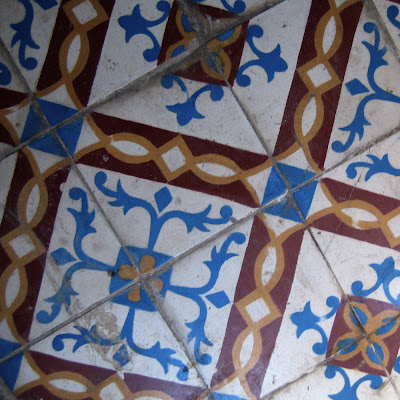 These tiles only improve with age and wear. Their porous cement surface, after countless waxings and endless foot traffic, becomes polished and reflective, warm and worn. The designs are made with colored pigment squeezed at high pressure into the layer of cement below, so that even if the surface chips, the color and the pattern remains, unlike today's glazed ceramic tiles, which look shabby when chipped. The result of an early industrial process, like letterpress or screen printing, the tiles have a rough and handmade quality rather than a computerized uniformity. They are fragile, even sandy and almost crumbly before they are installed, and they cannot be used out of doors except in the tropics; because of their porosity, freezing and thawing will crack and buckle them. 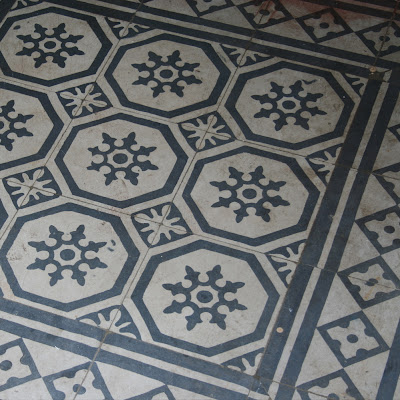 No less Islamic in design, this example is from Santiago, in Chile. All the rest of the tiles in this post were photographed in Fes and Meknes, Morocco

Many of these attributes make these tiles ill-suited to the modern world of mass production, where palettes of thin identical ceramic slabs brought from Turkey or China by container make it possible to match a tile from a Home Depot in Brooklyn with one purchased years later from a Lowe's in Arizona. In contrast the cement tiles are more than half an inch thick, heavy, dirty with grit, and difficult to transport as they easily crack until bonded to the floor. 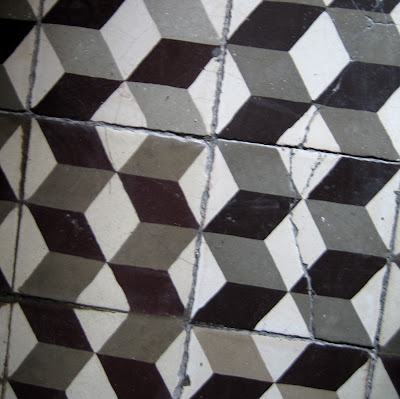 This cubic Escheresque pattern is an international favorite that can be seen gracing floors in many different countries. Here there are two color versions made with the same template.

Flooring is boring, I wrote not long ago in these pages. But my life sometimes seems to follow a winding path, paved with these tiles. A series of coincidences? Or is it that when one shows an interest in something it then begins to crop up in the most unlikely places? In New York, after a trip to the Yucatan where there were many such tiles to admire, I saw some in a shop window on 13th street, and went in. I recognized the salesman. We had deejayed together in the early 90s. He had moved on from his nightclubbing days by beginning a Moroccan import venture; his tiles, he said, were used in the enormous floor of a Las Vegas casino. He had become a partner in a tile production facility in Morocco. I bought six, and Joseph helped me make them into a steel-framed coffee table with rebar legs. Not much later, I went to the Philippines, to work on a documentary about Imelda Marcos. We interviewed her dressmaker, who lived in a house opulently tiled inside and out with the same cement tiles in rich ochre, green and burgundy, with matching borders and trim. His garden patio was a paradise of tile. Where had he gotten them? It turned out that the father of the boyfriend of our assistant producer had resurrected the lost art of Malaga tile production, and was responsible for them. A year or so later, walking across Cuba, I met on a countryside lane a man whose job was to replicate the designs seen on old Cuban floors to create replacement tiles for use in the renovation of Habana Vieja. 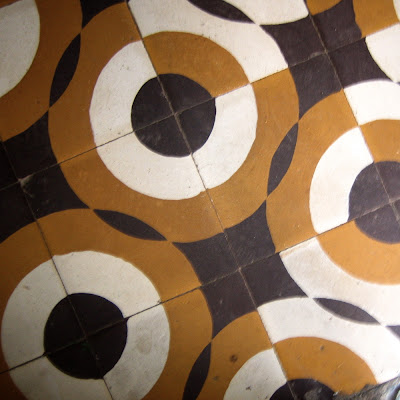 Despite all these spooky, recurring encounters I still had, until stumbling last week into a small garage outside the Moroccan holy village of Moulay Idriss, no idea how these tiles are actually made. There is a certain poetic justice in the discovery that Morocco is still a thriving center of cement tile production, for the Islamic preference for non-representational geometric patterns in decorative design, brought into Spain during the Moorish expansion, undoubtedly influenced the development and production of these tiles, wherever the technology to make them may have originated. Many of the designs I've seen across the world clearly take their inspiration from patterns seen in the zildj mosaics that sheathe mosques all the way from Tehran to Timbuctou. In Morocco, the technique for making them seems to have been in continuous use since some time in the 19th century; it has not had to be rediscovered, for it never quite disappeared.

UPDATE: The long awaited (by me, at least) Periplus Editions book on hydraulic or encaustic tile design is finally available. Called Havana Tile, the book, if one is to judge by the many intricate and colorful designs it includes, makes a pretty strong argument that Cuba is the place where this style of tile reached its highest level of development. Many of the historical facts relating to these tiles, about which I merely speculated, are herein revealed. 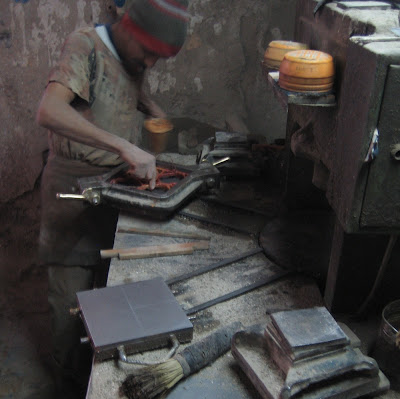 The pristine steel slab to the lower left of this image defines the exact 20cm X 20cm size of the tile, and its polished surface determines the smoothness of the finished tile's visible upper surface. The worker at the station above is just beginning to make a tile. He has set a template for the pattern inside a clamp on top of an identical steel slab in preparation for pouring the pigment. 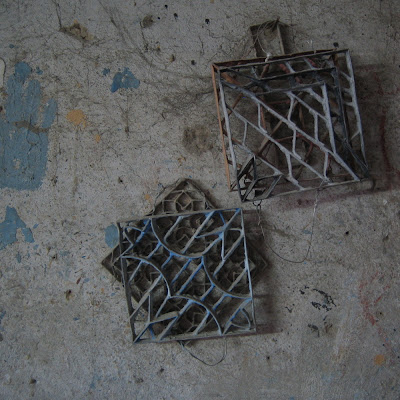 Templates hanging on the wall in the garage hint at a variety of possible patterns. 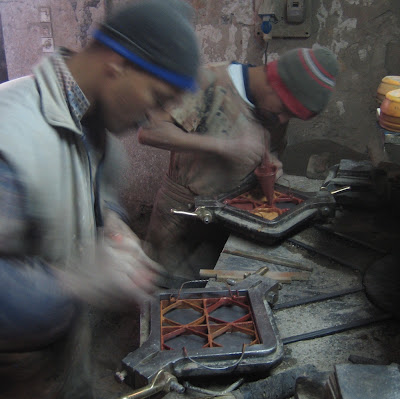 Here the same laborer is pouring the viscous, cementious pigment into the mold, which is essentially an ornate, square cookie cutter. The worker below is at step one in the process--all the labor is staggered in order that all four stations may share the lone central compactor. 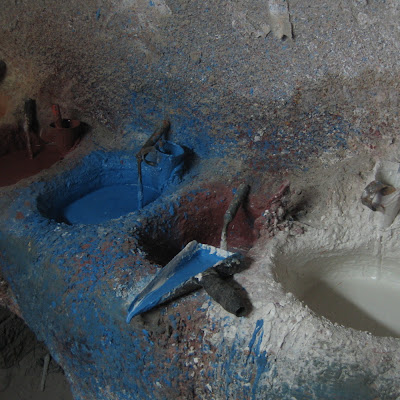 The pigments are kept in a row of stucco sinks and troweled into the molds as needed. 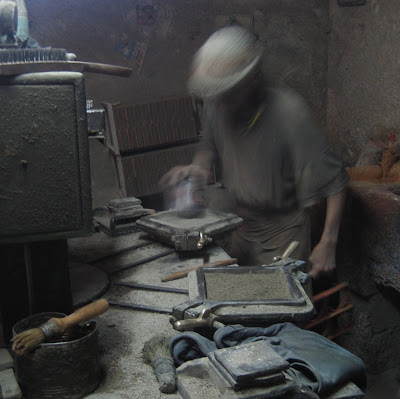 A third worker at the next stage of production. He has removed the template and is shaking dry cement on top of the colored layer. The next stage is visible at the empty station; a layer of wet gravel is added and smoothed. Finally the large iron anvil-like weight visible at the very bottom of the frame is placed on top of the three layer cement sandwich and the contraption is slid down the steel rails under the business end of the compressor. A few moments of crushing pressure and hey, presto, tile complete. 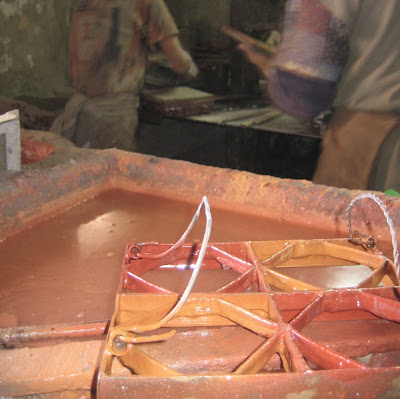 The gooey template, waiting to be cleaned off in preparation for making the next tile. 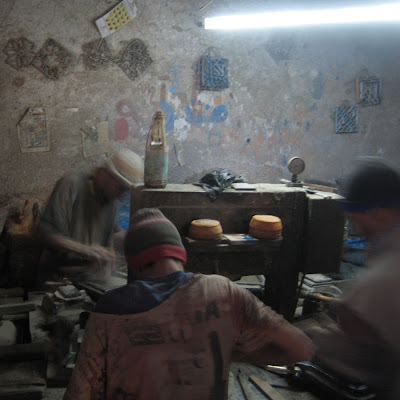 The apparatus allows four workers to make tiles simultaneously. In action these guys were a blurry, speeding hive of activity, as seen in the video clips below

I know, after more than fifteen years of working as a documentary sound recordist you would think I might have done a better job of filming all the necessary elements to tell the story of the making of a tile. It would be nice to have the money shot, in this case the completed tile being lifted out of the frame. Sorry I missed it; I was too excited. Much of what you see here is frantic and maniacal leveling of the rear surface layer of grit; the "tile sandwich" must have just the right amount of cement and gravel in it to properly compact into the finished product.

It's nothing to do with the Antarctic (could it be further away?) but it's immensely interesting all the same.

It makes me wonder how something I associate with the Islamic culture of Morocco ends up in all manner of places across the world. Spain is the common link I guess.

Super glad to find your blog. I too have a great appreciation for these cement tiles and lament that they are no longer made in the USA. Last occurrence I could find in the States was an older fellow, originally from Mexico, in Denver who made them there in 2000. He is now deceased and I cannot locate his heirs.

I am building a concrete 'hurricane proof' home on the Gulf Coast and wanted this type of tile for all the floors. As a result, I have designed my own patterns w/ coastal themes and will be marketing them as Villa Lagoon Tile, http://www.VillaLagoonTile.com .
Please have a look and see what you think.
My 'History' page has a comprehensive list of makers of this tile who have at least some web presence. I am sure there are many more.
I will link to your blog from that page also...thanks for all the info.

Hi There,
There is a company in San Francisco, California who manufacture their encaustic cement tiles in Morocco and they have a great selection of tiles.
Check out their website at:

It was great to find this post thru Lundy's site. I actually have a manufacturing plant of these tiles in the Dominican Republic and we have recently commissioned a book on the history of these tiles. The book should be finished by the end of the year, so for those interested in learning more about these tiles keep checking our site as we will have the book for sale there around November www.aguayotiles.com

Encaustic tiles or cement tiles are artistic, historic, and unique.
check out this website, they have great selection of encaustic cement tiles: