As part of an unofficial ongoing series on lesser-visited Parisian attractions we today bring you Le Corbusier's Villa La Roche, a private residence now controlled by his foundation. Tucked into a private close deep in the terminally unhip and utterly bourgeois 16th arrondissement, Villa La Roche and its attached neighbor, the Villa Jeanneret, are two houses from early in Corbu's career. Like many architects Le Corbusier started out working for friends and family: In the glorious Parisian twenties, when new avant-gardes sprang up just about every time more than two or three artists ran into one another at a café, La Roche was a collector of the painting of "purism," the little known post-cubist movement manifestoed by Le Corbusier and the disaffected (or simply unsuccessful) Cubist painter Amédée Ozenfant. Corbu's real name was Jeanneret, and the adjacent Villa Jeanneret was originally built for his brother. His architectural partner at the time was his cousin, Pierre Jeanneret. 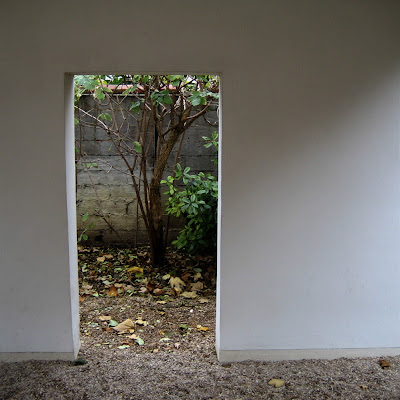 In 1925 I'm not sure if this open-sided patio space underneath the gallery was meant for parking cars out of the rain or just as a sort of outdoor entryway, but in the age of the automobile it has been copied millions of times since. Drive in, open the car door, and you're home. 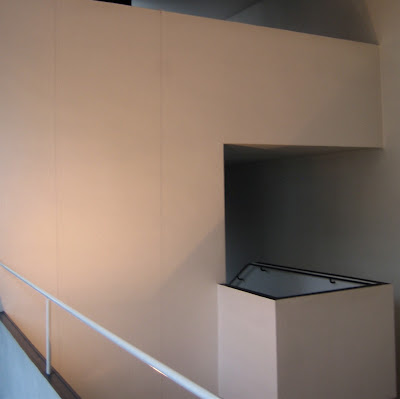 Another innovation now almost essential in McMansion construction is the interior triple-height foyer. At the Villa La Roche it literally cuts the building in half, with only a second-floor catwalk connecting the personal art-gallery and library with the bedroom and kitchen spaces on the other side. A detail I particularly liked is that the extension of the stairwell into the atrium space, which makes a sort of interior rapunzel-balcony overlooking the ground floor, echoes another, exterior one that projects off the far end of the gallery like a modernist deer-hunting stand. The one out of doors is just large enough for a few select potted plants, with room to stand and salute one's arriving guests. 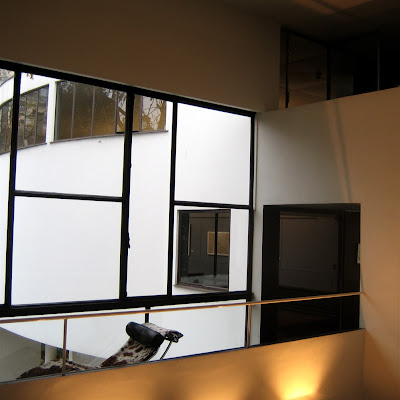 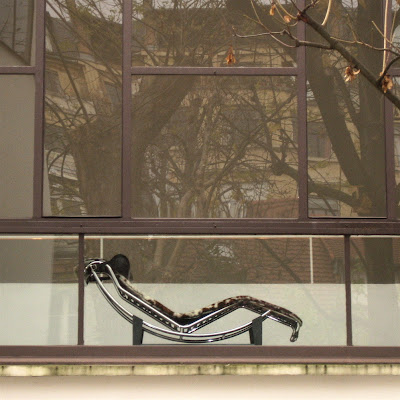 The same catwalk, viewed from outside, with that iconic chaise 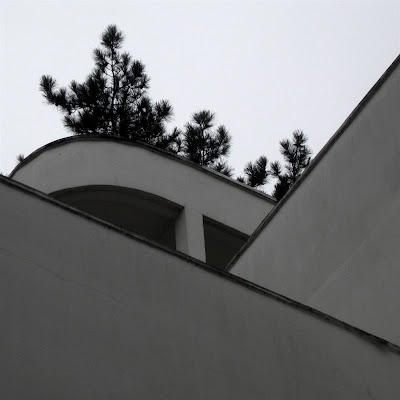 Stark and sparse, the house has an attractive and complex layering of white planes 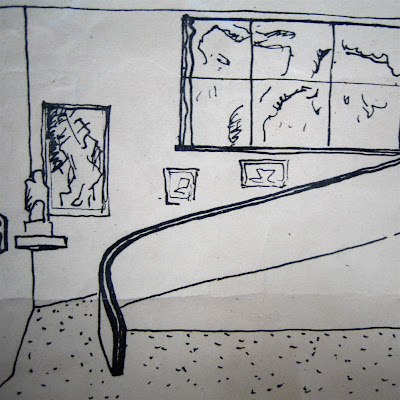 The original plans and drawings for the house now hang self-referentially in the gallery space, replacing La Roche's "purist" art collection. A ramp, like a steep prototype for a wheelchair accessible facility, swoops up across the windowed back of the gallery; it is the only means of access to the extraordinarily isolated library / love nook tucked far up above the foyer. 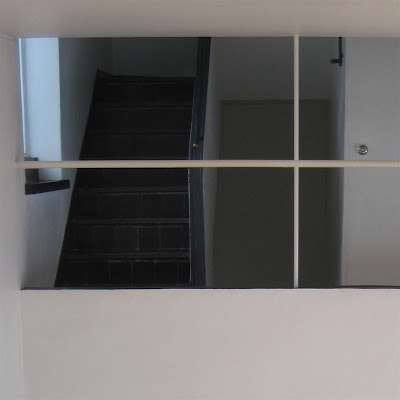 Looking across the entry way from either side one realizes that an amazing amount of space is taken up by staircases in this small house, which has not the luxury of the excessive expanses of real estate of the McMansion to either side of its divisive entrance. In fact, one of the more obvious innovations of this building is the architects' willingness to forgo buildable square footage in favor of columns of daylight, cutback roof decks and the sheltered patio / garage outside the front door. The place has the feel of two rather odd abutting triplex apartments instead of one integrated home, although the intention seems to have to have divided the "intellectual" spaces, those for contemplation and study, from the living spaces where sleeping, cooking, and eating take place.

it was a garage bellow.
did you know the plans were originally for many units/clients?
these were the only two with the nerve to actually build.
the roof terrace is like the deck of a ship.