Reading: The Omnivore's Dilemma by Michael Pollan and My Life in France by Julia Child 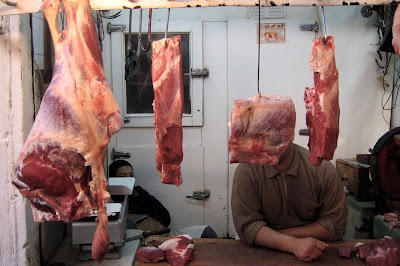 Something is wrong with our diet, and two months of delighting in the outdoor markets of Paris have only served to focus my attention on the problem. Tomatoes that actually have flavor; herbs that haven't travelled hundreds of miles since being picked and therefore remain fresh in their paper bags until well past the next market day; vegetables firm and local; chickens of all different sorts and costs, priced quite clearly in relation to the amount of love and care that has been spent on raising them; these are only a few of the things to be seen on the street here that are quite different from the typical American food shopping experience. Begin to consider the relationships between the sellers and producers of this "produce" and the contrasts are amplified. And the French are still complaining that their way of life is being destroyed. In Morocco, they say, the tomatoes still really taste like tomatoes. 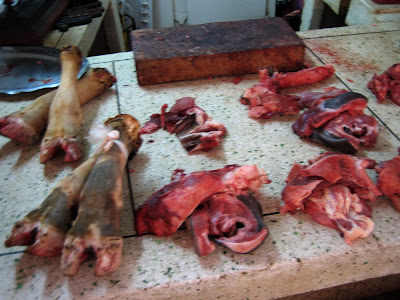 In two quite different books, one an indictment of contemporary American agrobusiness, the other a memoir summoning up misty, romantic reminiscences of a budding cook's first initiation into the finest sort of gastronomic Parisian life, we are forced to think about what we are eating. Julia Child's cholesterolfest is the chronicle of her life in the 7th arrondissement, of meals and wines and sauces first tasted, and of how she came to co-author another book, Mastering the Art of French Cooking, which was a runaway hit in the United States of the 1960s and launched Child's career as a TV star. In it are to be found the seeds of both America's ongoing culinary revolution and the extraordinary success of cooking as televised entertainment. Pollan's book is organized around the conceit of three meals he prepares at the end of three food chains he identifies: industrial, organic, and hunter-gatherer. Actually, there are four meals, because he discovers that what we know of today as organic has been all but co-opted by industry, so he eats one "industrial-organic" meal and one that we might call "beyond organic." But it is much less a book about eating than it is about the implications of the food we eat; Pollan is concerned with the moral, social, political, and environmental costs of most every bite we put into our mouths.

At the beginning of My Life in France

Julia and her husband Paul, who met in Asia working for the precursor to the CIA, move to Paris on a USIS propaganda contract. Child eats sole meuniere and tastes poulet de bresse and she is hooked; before long she is biting into lark pies, roasting capercaillies and hares and doubtless swallowing ortolans whole. The Childs bring an American insatiability to the cuisine they find in Paris, and she points out several times that the key to eating in the land of butter and cream, of lard and cheese, is portion control. No seconds, no snacks. Meanwhile she is endlessly in the kitchen refining recipes that call for vats of these delicious fats. Refining and tasting. She and Paul diet, even at one point--gasp-- cutting out alcohol. There is never the slightest moral quandary raised by their charmed Parisian lifestyle, merely an endless search for the very best ingredients and preparations. 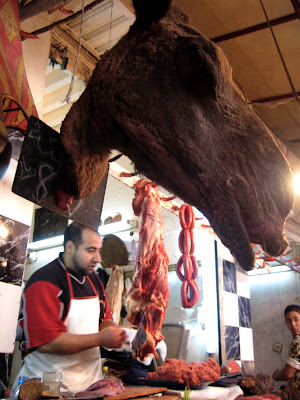 of what ends up on your plate is a more of a look at the ingredients that go into the ingredients. Unless you pay a lot of attention to what you eat, in America today much of what you eat is processed corn. Cattle are fed on it, although they never evolved to eat grain; so much for steak. So are chicken when they aren't eating much grosser stuff. Sodas are sweetened with it; these days sugar cane is an exotic tropical delicacy. In fact anything that is sweetened at all, and these days that is virtually every processed food product available, is sweetened with corn syrup. The ballooning of America, our grotesque epidemic of national obesity, Pollan dates to the sudden corporate switch from sugar to corn syrup in the late 1970s. Corn, it turns out, is disastrous for cows, for the environment, and for our health. Nonetheless, thanks to a downward-spiraling and self-reinforcing combination of government subsidies and agricultural exigencies we now have a beef industry that produces most of our meat pretty much out of sight of a blade of grass, cattle's natural food. He buys a cow, watches it eat corn, and then is refused entry to the slaughterhouse where it is killed and butchered.

"The industrialization--and brutalization--of animals in America," he writes, "is a relatively new, evitable, and local phenomenon: No other country raises and slaughters its food animals quite as intensively or as brutally as we do. No other people in history has lived at quite so great a remove from the animals they eat. Were the walls of our meat industry to become transparent, literally or even figuratively, we would not long continue to raise, kill, and eat animals the way we do." But because we consumers both want our food cheap and want to eat it without relating our meal to the death of a fellow mammal, we are complicit in the sorry turn of events that has brought us to where we are today: acres of densely-packed beef standing ankle-deep in their own waste for most of their lives, gobbling corn mixed liberally with antibiotics. Mmmm. Yummy. We're in denial about why our food is inexpensive, but to come out of that denial we will have to face certain unpleasant realities. For instance, hamburgers and steaks once had faces. 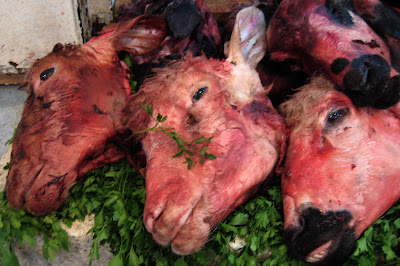 Pollan, horrified, flees the feedlots of the midwest for the huge produce farms of California, and even temporarily attempts vegetarianism. But his history of the organic vegetable industry makes it clear that what was once a hippy idea about goodness has become little more than a marketing term. Vast conglomerates now grow organic produce, and about the only good thing Pollan has to say about it is that the fields are fertilized naturally, preventing the runoff of poisonous chemicals. A head of fuel-guzzling salad is still trucked or flown across the continent before it reaches my Red Hook Fairway, the pickers are still underpaid and exploited and the flavor of a tomato is, well, scarcely Moroccan. 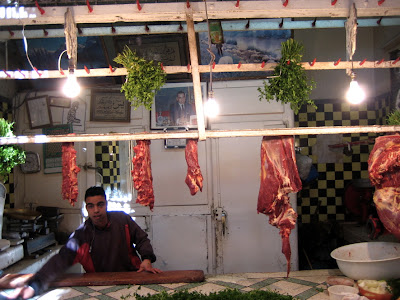 He goes next to Polyface Farm in Virginia, where a guy who sounds to me like a prime candidate for a MacArthur genius award, Joel Salatin,

runs a complete, diverse, holistic eco-system sort of an operation. Chickens roam outside, fertilizing grass which the cattle bite back to just the right length, inspiring the blades to heroic efforts of regrowth. The animals are fat and happy and tasty. There are acres of rotating vegetable crops. It is all very Old MacDonald and nothing at all to do with McDonald's. Customers are able to choose their own live chickens and even encouraged to watch them being killed. (A few years ago I did sound on a cooking show. On one episode we visited a northwestern New Jersey farm rather along the lines of Salatin's. The show's hostess, Rosemary, ooed and aahed over a pair of truly spectacular hens that our host, the farmer, had killed in preparation for our visit and hung on the shed to bleed out. They were splendid, and Rosemary proposed a scene in which he and she would talk through the recipes for the evening meal while plucking the chickens. This was vetoed, promptly but with regrets, by the field producer, who said that chickens being plucked had zero chance of actually making it onto television. It was a powerful illustration of the absurdity of our American relationship to our food, and the media's role in reinforcing the dysfunction.) 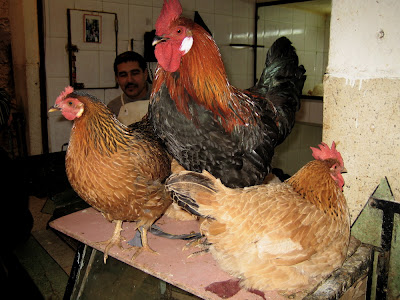 Although Salatin's farm is not quite 100% self-sufficient, the aspiration of a farm like his poses a direct threat to the very fundament of capitalism. The closed, ecological system, every plant and animal in balance, is great for growing food, but it means the death of growth in the business sense of the word. As Pollan points out, no fertilizer is purchased from industrial agribusiness; inputs are few, and the goal is for them to dwindle to none. The farm has the potential to produce a certain number of eggs and chickens, but to try and have more stresses the land and throws the system out of balance. Although it is a constantly changing dynamic interplay of a wide variety of edible life, economically, an operation like this is static.

Salatin is little concerned with the "organic" moniker. Instead, and far more important than any notion of organic farming, are the ideals of transparency and local production that his operation embodies. Paying two dollars a pound more for a vegetable at a Whole Foods does almost nothing to change the environmental and ethical dynamics of American food consumption. We love the convenience of driving to the supermarket to buy our pristine shrink-wrapped cuts of meat, our buffed, glowing pressure-washed vegetables, but to really change anything we need to be riding our bikes to the farmers market. How far has your radish traveled? And what was the name of the chicken you had for dinner last night? (Or at the very least, what did the building it was raised in look like?) The concerned consumer should hope to know the answers to these questions. The many social benefits of this buy local and buy fresh strategy would have been, for Julia Child, primarily culinary benefits, but the beauty of it is that the two go hand in hand. Buying from Joel Salatin, if you have the luck to live just down the road from him, isn't only the best thing you can do for the planet, it will also get you the most tasty meal you can hope to prepare.

You should send this one to Peter Singer --

Actually, Peter Singer features in Pollan's book, but I didn't get to that...

Another book that bemoans the state of the American food system is Skinny Bitch, which, under the guise of a young-women's diet guide, is a screed against the USDA, FDA, and meat industry.
I recommend it, but be prepared to change the way you eat!
Now, when do you get back to Red Hook and start serving up that good food of yours? I'll stop by the farmer's market if you cook!