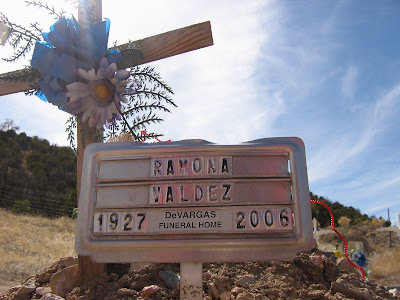 Just wound up a week of filming in Cañones with Meredith Monk, Babeth VanLoo and Brigit Hillenius in a spectacular corner of north-central New Mexico where the mountains start to slide down into the desert, a country of high mesas dotted with evergreens. It is an open, brilliant, sunlit habitat where cactus litter the forest floor and Townsend's solitaires flit from bush to bush. The gulches carved by the many arroyos are at this time of year full with burbling silver ribbons of snowmelt, fast-flowing watercourses lined with naked, bleached cottonwoods that at 7500 feet above sea level are still awaiting the first buds of spring. Towering red and ochre bluffs, exposed millions of years ago, once home to Anasazi cliff-dwellers, now loom over adobe vacation homes built for those seeking a remoteness they used to find near Santa Fe. 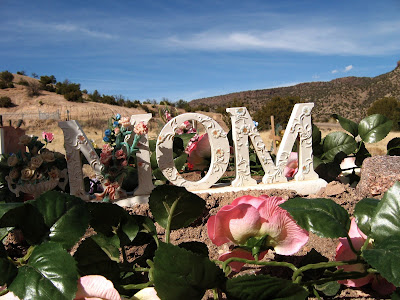 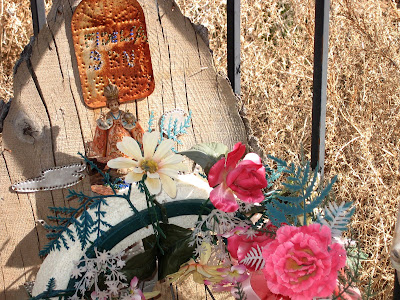 The village of Cañones, where we spent the last five days, is a modest centuries-old community of latin americans that has felt the pressures of a sort of rural gentrification, with the explosion in the price per acre of once impossibly remote mountain land bringing riches to those selling off a parcel or two from the old family spread, but discomfort and resentment to a generation looking to get out of their parents' house, hoping to set up a household of their own, only to find themselves limited by circumstance to living in a trailer in a corner of a field. Unlike the newcomers, spread out on as much land as possible in their eagerness to protect views devoid of neighbors, structures or other impediments to tranquility, the earlier hispanic residents of Cañones are clustered together in what must once have been an extraordinarily remote mountain village, a collection of humble ranch homes and single-wide trailers, where the pavement turns to dirt tracks leading up into the canyons.

The town cemetery is a football-field sized plot in which many of the dead make do with simple wooden crosses, homemade headstones or the tin sign provided by the funeral parlor. Plastic flowers and ersatz memorials create a baroque and desert-durable flash of color at the entrance of town. 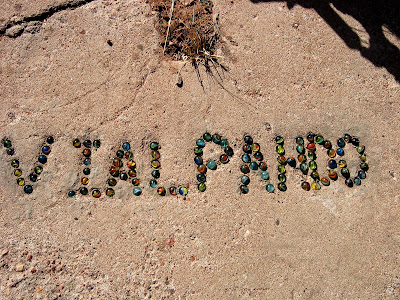 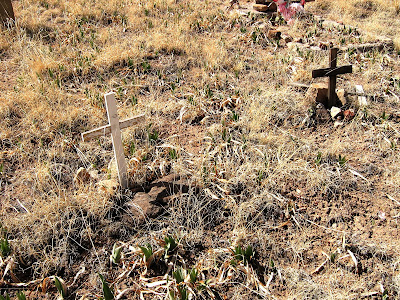 I took these pictures yesterday, and in what seems an astonishing coincidence (how often does the New York Times run a story about Rio Arriba County, New Mexico?) Erick Eckholm writes today in the NYT about the plethora of addictions that plague the Hispanic communities of the region. "More than one in five residents is below the federal poverty line and far more are just above it," he notes. Although someone we met here had mentioned that Rio Arriba had the highest rate of death by drug overdose of any county in the nation, I hadn't given it much thought or credence--everywhere I go seems to be the best or worst or tallest of this or that, or have the most or least of something, and often the very same claim to fame seem to be repeated in many different places. But there it was, right in the paper of record. 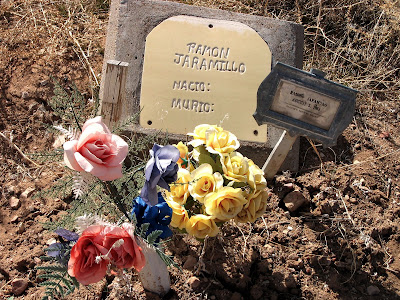 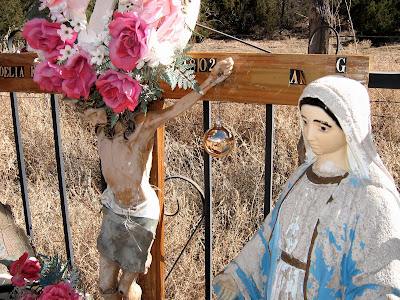 While it seems a stretch to blame the local heroin devastation on gentrification, some local activists, according to Eckholm, think there may be some relationship: "Many in the fight against drugs," he writes, "...believe the heavy use of drugs and alcohol is rooted in a shared sense of loss, starting when the United States refused to recognize many Spanish land grants in the mid 19th century and building more recently as struggling families, accustomed to farming and ranching, became dispirited as they had to sell land." 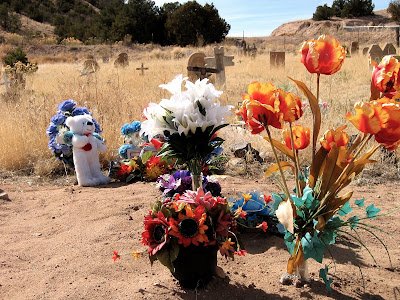 I wasn't thinking of the Cañones cemetary in terms of overdoses, or even thinking particularly about death when I took these pictures; I was more intrigued by the aesthetics of these hand-tended memorials. It was only because Brigit and I had some time to kill as we waited for Babeth to return with a fresh videotape that I prowled among the graves. But picking up the Times in the Houston airport on the way back to New York gave them an additional resonance. 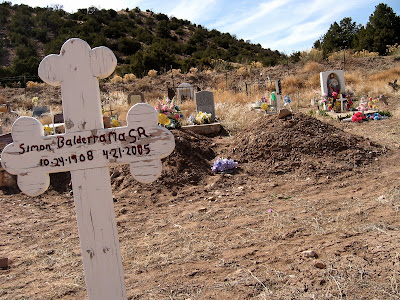 Interesting. One man's opinion without verification of the facts. Five days in this town will never give you opportunity to experience the town and its majestic beauty! When traveling through the world "relaxing" I challenge you to Respect those whose history you claim to know so much about!

I don't see that I've disrespected anyone here, or presented any facts, beyond reporting what I read in the newspaper that day. It seemed an almost uncanny coincidence to have been standing in the town cemetery in the morning and then to have stumbled upon a long story in the New York Times later that very day. I make no claim to knowing the history of Cañones, and I described it as "a spectacular corner of north-central New Mexico." If you would be more specific about who and what you think I have disrespected, and which facts I have not verified, I would be thankful. If you don't think there is an uncomfortable upward pressure on local real estate that is causing conflicts in a traditional way of life, then you either have your own agenda, or you haven't spent much time talking to local residents.

To portray the town as drug ridden is a blatant disrespect to the people who have called this place home for many years. While the problem may exist in Rio Arriba County, I challenge you to verify how many of those "town" residents died of drug overdoses. I personally can think of none! How do I know you may ask yourself? It is due to the simple fact that I have been a resident of this town my entire life. I hope that you never know the feeling of having your home shamed by some random wandering visitor with his "own agenda." Oh and as a side note, I think I've spent plenty of time talking to the "local residents."

I thank you for coming back and continuing the conversation, but I remain convinced that you are misreading my original post. I never suggest that the graves in these photographs are those of overdose victims (first of all, I consider heroin addiction a disease, not a lifestyle choice, and think that drug addiction should inspire help, not shame). I was careful to note that "I wasn't thinking of the Cañones cemetery in terms of overdoses, or even thinking particularly about death when I took these pictures...." In fact I took them because I thought the cemetery was very beautiful. I don't know if you read the original New York Times article, but it is easy for me to imagine that it was a painful portrayal, from the perspective of residents of Rio Arriba county. But I didn't write that story, and I don't claim to know of Cañones residents who died from heroin-related causes (although we did spend time with a family that was trying to recover from a multi-generational dual addiction). Your real beef, I think, is with Erick Eckholm.

I saw this as a post about gentrification--pressure on local land prices due to a new community (primarily made up of wealthy anglo outsiders) increasingly interested in taking advantage of the beauty of the Cañones area. I only suggested in my last comment that you might have another agenda, or might not have spoken with local residents, in that specific context. Let me ask you straight out: do you "think there is an uncomfortable upward pressure on local real estate that is causing conflicts in a traditional way of life," or do you disagree?