I toast you with a lovely glass of fresh milk! 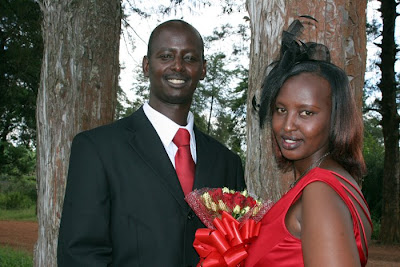 My main man James, the cameraman I've had the great pleasure of repeatedly working with in Rwanda over the last few years, is getting married. Congratulations, James! Now, I myself am not married, and although most of my friends and associates seem to be dropping like flies, remaining unmarried in your forties in Brooklyn is scarcely unique. It is more so, perhaps, in Rwanda, where James, in his late thirties, lately had been feeling the heavy burden of bachelorhood. In Kigali many and most marry rather younger. Anne Aghion and I joked about it with him on every trip, lamenting James' status each time we revisited Rwanda, and debating whether it would be Fleming or Gakwerere who would first walk down the aisle. It was a race that James seemed both likely and eager to win, and I told him if he came to New York I would have him married off in no time. A few trips ago Anne even tried to fan the kindling of romance herself, introducing James to the lovely and eligible Chantal, a divorcée schoolteacher from a hillside adjacent to where we spent much time filming. James gave good flirt, but he judged her fickle, and a little too country, I sensed. She ended up marrying some hick from a few hills over, and we put her out of our thoughts.

Then, just before I left Rwanda at the end of my last visit there, James confided that he had a new lady-love. Is it serious? I asked. Umhmmmmmmmmmn, said James. James grew up herding cattle as boy in exile in Uganda, and he tends to avoid the word "yes," in favor of a sort of throaty, affirmative bovine hum. Is she beautiful? I asked. Mmmmmmhmmmmmm, he said, and then burst out laughing. 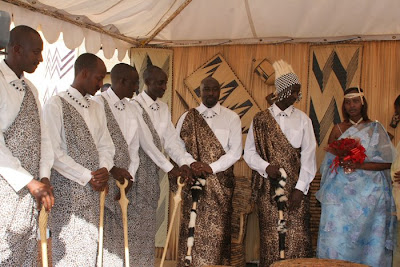 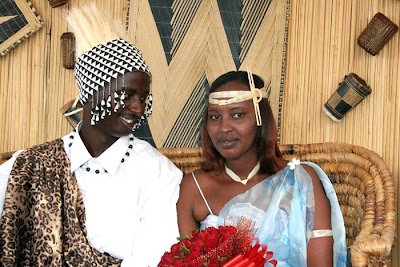 James in all his finery, gazing at his bride-to-be 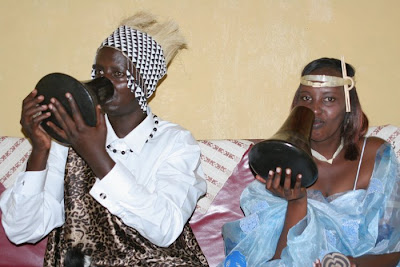 Ceremonial milk-drinking. According to tradition, James comes from a tribe of cattle-herders, for whom the herd is almost sacred. Although an urban gentleman and Rwanda television's foremost cameraman, James' savings are invested not in stocks and bonds, but in his own personal herd, guarded by a young cousin on family land in the north. Given the tumultuous world financial markets, living animals, since they produce milk, butter, cheese and meat, are looking like a much better place to have one's money than the abstraction of most of the other financial instruments on offer. Maintaining the cow theme, the ring tone on James' cell is a long and plaintive moo, and on our drives into the countryside to film, James often nostalgically described for us the qualities and benefits of the various sorts of cows we passed in the fields beside the road.