Where the fat lady Sings 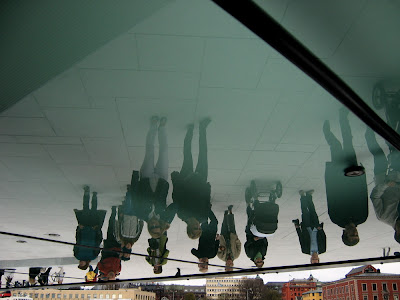 What people do lately on Saturday afternoons in Oslo is go to the Opera. Not that anyone is singing there. The Norwegians just want to check out their latest architectural jewel, a seven-hundred-million dollar granite and marble theater that literally slides into the harbor, just a stone's throw from their quaintly diminutive stock exchange. 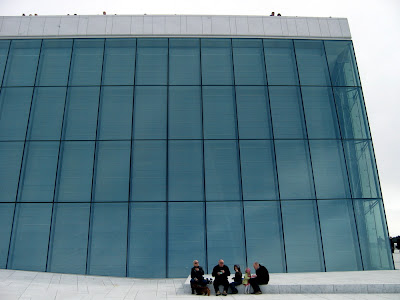 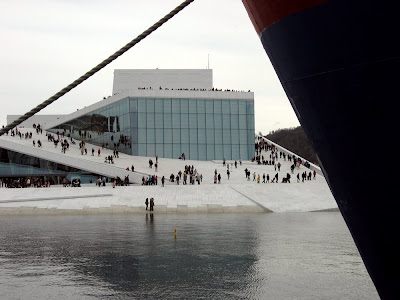 I first walked by early on Friday morning on my way to work, but as I was at the time having a paranoid episode involving a possible failure to correctly adjust my clock to the local time, I didn't stop to explore its imposing, then-deserted, white surfaces. Convinced that I was an hour late for a twenty-minute interview with George Soros, I hurried on. 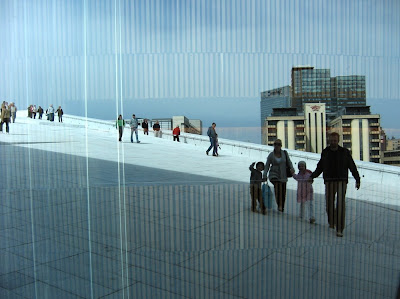 Luckily, and as usual, I turned out to have been deluding myself. When I returned on Saturday's lunch break I found the place thronged with people. There were literally lines to get into the building, and its vast external expanses of public space were crawling with blonde, Scandinavian humanity. 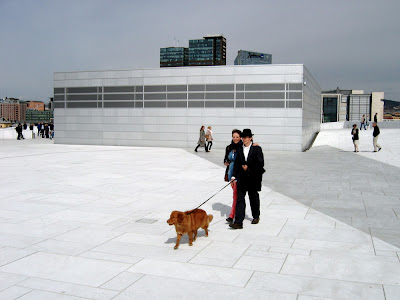 Immediately, I could see why. It is a splendid structure, preconceived as a post-apocalyptic edifice; with its exterior spaces just as useful and appealing as its interior ones, the place, for it is as much a place as a building, is constructed as if it had already collapsed and begun to slide into the sea. Oslo has suddenly poured itself a vast white sand beach, where no tropical waterfront existed before, and many will be the bathing beauties who come to baste here in the lunch-hour rays of the summer sun. 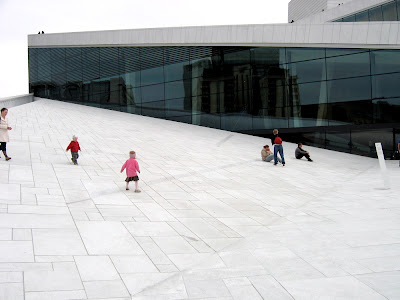 The building is, deservedly, a crowd pleaser. Walkers willing to do a bit of steep climbing may circumnavigate a central glass wedge, which shields the theater proper. In the winter, radiant floor heating warms the sloping granite surfaces, preventing an icy condition. Nonetheless, this is a building that would never reach the construction stage in the United States, not so much thanks to our lack of architectural vision, but because of our enthusiasm for litigation. 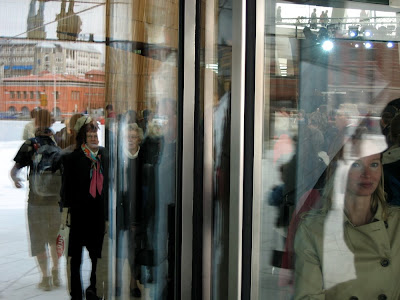 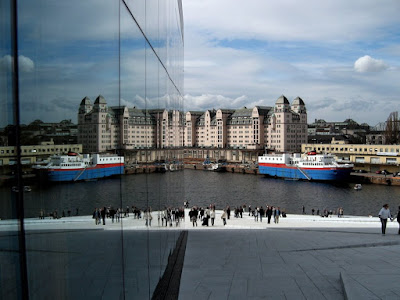 Integrated into the harbor because of the way the building slides into the water, as if global warming had already caused the sea level to rise (one wonders if the rising yet to come was considered in the rest of the construction), the opera house also fits seamlessly into the city landscape, thanks to its many expanses of reflective glass. Glimmers of the goings on in the darker interior compete with exterior reflections of the skyline, so that the windows, viewed from outside, make a constantly shifting, multilayered artwork. This is one of those buildings where it is difficult to take a bad photograph, an attribute I find is a strong indicator of good architecture. 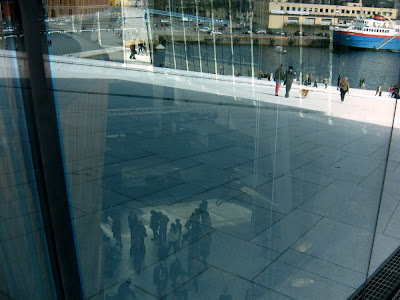 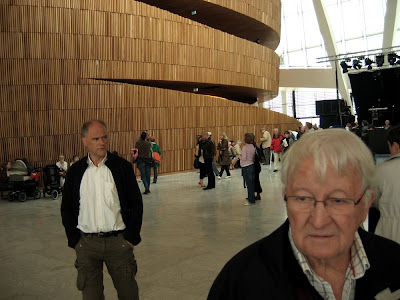 Inside, the performance space is defined by a spiral decorated in classic Scandinavian style; from the lobby it looks rather like an organic version of the original New York City Guggenheim, but made out of strips of blonde wood. 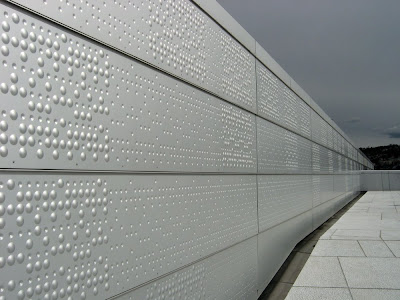 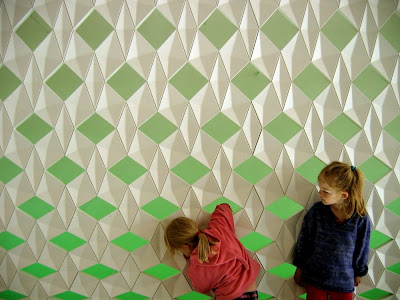 Despite many complex and exciting surfaces, including the black Venetian plaster in the bathrooms, the braille-like aluminum exterior cladding, and this backlit wall of diamond shaped tiles mixed in with their own voids, the overall effect is of a simple and desirable Nordic sparseness. It is a big structure, but because so much of its exterior is essentially camouflaged as a beach, it is no way imposing or bombastic. 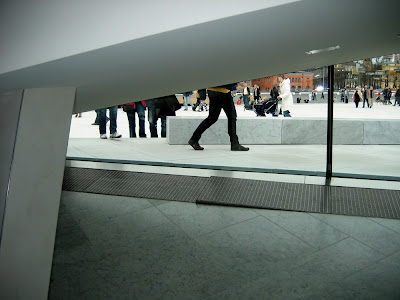 For once, in our era of big-name, ego driven architectural commissions, here is an important building designed by a firm, not some would-be artist forging a personal style so that he can put his name on the building as if it were a brand of sneaker. I had never heard of Snøhetta, but they spent far more time thinking about how people might use this building than they did about worrying whether anyone would immediately know who built it. [Warning, link is to vicious, Adobe Flash 9 website--perhaps Snøhetta should have kept their web design in-house.] 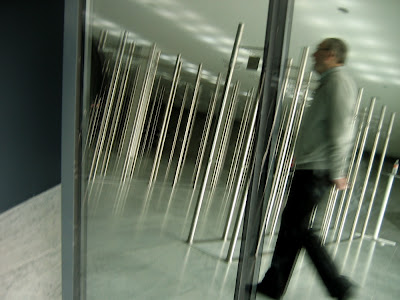 The attention to detail only adds to the pleasure. Here, each tree of this forest-like collection of coathooks in the open-plan cloakroom doubles as an invisible lamp, projecting a soft white light up onto the ceiling from within the column. 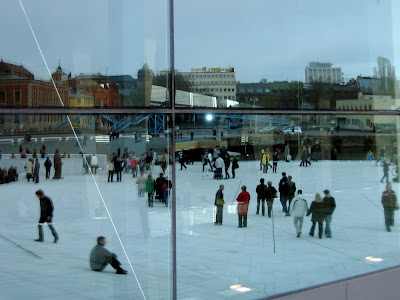 Along the lines of the visual coincidences outlined in Lawrence Weschler's spectacular book, Everything That Rises: A Book of Convergences,

it was impossible, looking at the reflections in the glass, not to think of Pieter Brueghel.