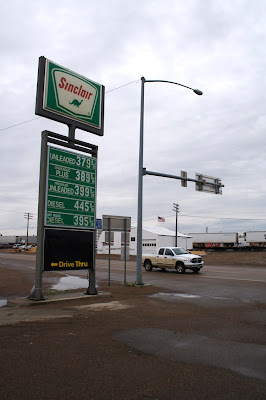 We're thinking this purveyor of America's arterial fluid needs to update its logo, or else fully embrace the irony of selling gasoline under the sign of the brontosaurus. Found in abundance (these gas stations, not the brontosaurii) in a wide swath of the west, from Montana all the way to Wisconsin, these guys take the selling of fossil fuels seriously.

People in the developing world are starving because the demand for grain crops to make ethanol, and the land on which to grow them, has already doubled the cost of rural third world staples like rice, corn and wheat. Even if this fact alone were not enough to eradicate ethanol's spurious claims to "greenness" and sustainability, it turns out the demand for ethanol crops is encouraging further Amazon rainforest destruction, as more irreplaceable forest is cleared for planting. Perhaps Sinclair, without having to rebrand itself or change its cute "brontie" logo, might reposition themselves for success (however short-term) as the only company selling 100% petroleum, 100% percent of the time. "Pure Fossil Power" has a certain ring to it. 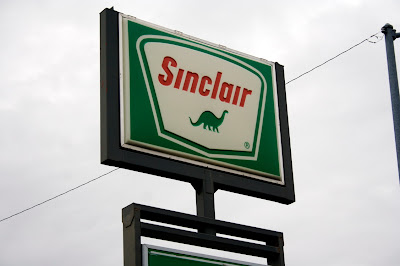 Update: While working on an entirely different project, I recently stumbled on the artwork from an old can of "Pennsylvania" Sinclair Motor Oil that explicitly markets itself as fossil fuel, playing, perhaps, on the idea that age makes a product better, like fine wine: 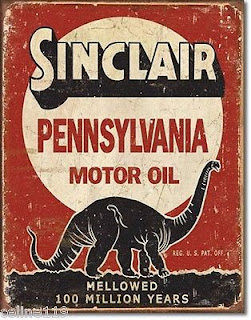