Flew out to Oregon to help Laura drive her trusty pickup back east; I've never driven all the way across the country in one go before. The trip started auspiciously, as we headed out of Portland late in the afternoon on the day of Obama's record-breaking political rally. Yesterday's newspapers showed a sea of bodies crushed together, eagerly listening to what he has to say. He is looking more and more like a lock for the nomination; it seems like only a matter of days, or even perhaps hours, before Hil throws in the towel. Already she must be alienating more voters, former supporters and superdelegates than she could possibly be attracting, and so we hope that for her own sake she moves quickly, in the painful process of decisively losing, from denial to acceptance. 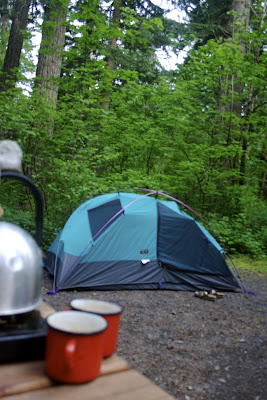 Camp One, At Beacon Rock, in the Cascades, in the spectacular Columbia River valley, a spot Lewis and Clark passed as they were nearing the end of their journey. Although they could not yet see the Pacific Ocean, the sight of the seagulls patrolling the upstream reaches of the mighty river must have warmed their hearts. 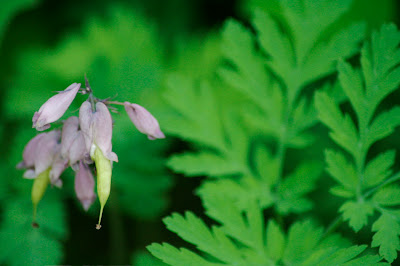 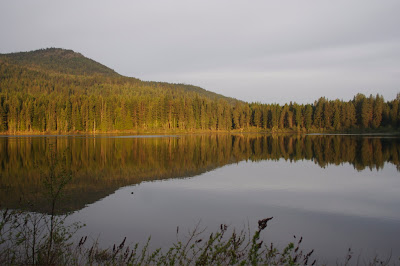 Round Lake rorschach, Idaho Panhandle, dawn. The eerie calls of breeding Red-necked grebes gabbling in the marshy verges of the lake accompanied our dinner of couscous and grilled asparagus. The site of Camp Two. 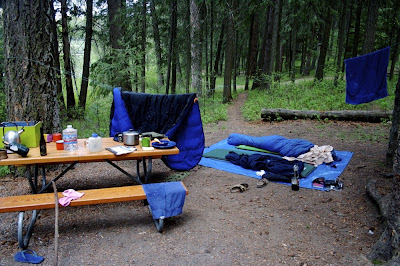 Camp Two. But what's missing from this photo? You noticed? How lovely, you may be be thinking, it was such a wonderful, starlit night, and the temperature so mild, that they dispensed with the claustrophobia of the tent altogether, sacking out al fresco. How mistaken you are! While unpacking the truck beside mosquito-infested Round Lake I discovered that one of us had left the bundled-up tent on the picnic table at Camp One, four hundred miles back down the road. I'm far too gallant to tell you who was responsible for this calamity, but she later claimed to have been distracted from packing by some wildflowers that needed urgent collecting. Something similar happened to me once before, in Africa, but that time, there was no one else to blame. 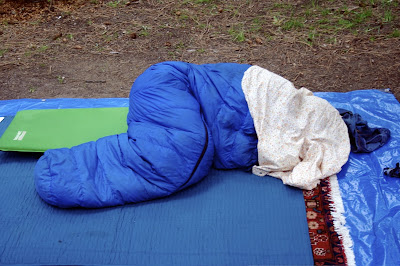 Camp Two, detail. Harmonian mosquito avoidance strategy. Note the crisp, brand-new blue polytarp we purchased only fifty miles back down the road at the Coeur D'Alene Walmart, "to protect the bottom of the tent." 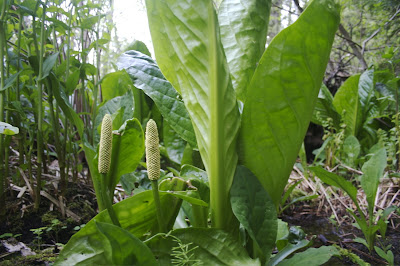 Skunk cabbage. One hoped that the upside of setting up camp next to a pungent, stinky patch of this gigantic swamp-tobacco would be diminished mosquito activity. Sadly not.

Thank goodness it didn't rain, although that might have kept the bugs down. Apparently Mrs. Clinton still hasn't capitulated.

ha ha ha. you seem to have a habit of leaving the tent--or tent parts--behind.

have fun man....we had a great time cross country this year even though it was January.

Keep a look out for Morels! We've been finding a ton and you will be crossing some ripe areas.

check out our first morning find: