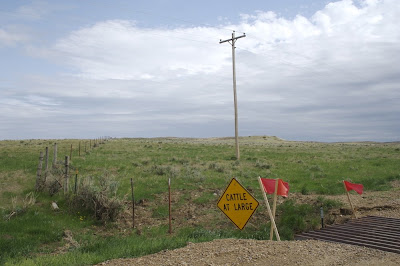 East of the Marais Pass and the continental divide, Route 2 follows the railroad tracks of the Hi-Line right the way across northern Montana, from one small single-stoplight town to another. Only the grain elevators stabbing up into the sky beside the tracks mark the skyline above the expansive plains of this endless state. At Glasgow we turned south, tempted by a remote campsite mapped on the shores of Fort Peck Lake, the enormous reservoir created by the first of the dams exploiting the power of the Missouri River. 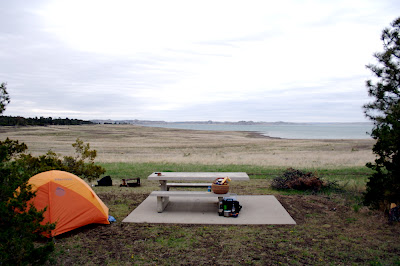 Delightful lakefront solitude. Not another camper was to be found. The new tent has now survived two nights of use without being blown away or forgotten. 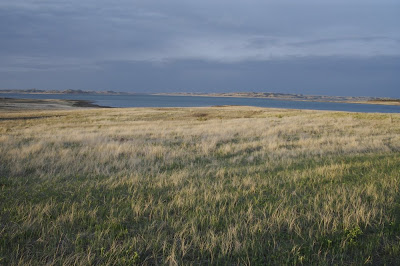 Grasslands on the shores of Fort Peck Lake, at Camp 5 inside the Charles M. Russell National Wildlife Refuge

North Dakota is said to be the least visited state. This is perhaps unsurprising, as only the true plains addict would appreciate its charms. Apart from the legendary hospitality: In Fargo, butted hard up against Minnesota at the state's easternmost edge, we stopped for a night with Allan and Hazel Ashworth. Allan is the geology professor who was kind enough to share his antarctican field camp with our film crew a year and a half ago. Despite those two months in the frozen wilds submitting to the indignities of sharing an open-air toilet, not to mention being filmed daily, Allan invited us, after a last minute call, to stay the night. We had a lovely dose of plains hospitality, ate our first Thai meal since Queens, and saw our first black people since Portland, the latter two things suggesting just how far Fargo has come since Allan and Hazel first arrived here, from Surrey, England, in 1969. Culture shock is too mild a term to describe their reaction to landing in what was then a diminutive, provincial, ice-bound town, something like a transplanted outpost of northern Scandinavia, with all its racial diversity. But Fargo is slowly changing for the better. At the restaurant the adjacent table held a large extended family of Indians, as in people from India, and a sizable population of resettled refugees from the horn of Africa now call the city home.

The story of the drive across North Dakota is one of a grueling three-hundred-mile battle against a constant forty-mile-an-hour headwind. Despite stops at the Arrowwood National Wildlife Refuge and a few other select patches of preserved prairie, almost none of the ornithological specialties of this endangered habitat, once the natural state of huge areas of the plains, showed themselves. No surprise, since the few birds which lifted up off of the grasslands at our approach immediately wheeled off downwind, flapping as hard as possible to avoid being slammed back down into the matted grass by the gusts. With the bird trip list suffering from a distinct lack of prairie birds, Allan suggested a sort of last-chance stop just over the Minnesota border at a postage-stamp sized patch of Nature Conservancy land, Bluestem Prairie. He served up breakfast, scribbled a map on a sheet of notebook paper, and we said au revoir to Fargo.

Shortgrass prairie may not be everyone's idea of a must-see sort of a habitat, resembling as it does an unkempt, unmowed field. It has no majestic Redwoods, no epic stands of conifers or rafts of ducks to be glimpsed dabbling on shimmering lakes. Few people have seen pristine shortgrass prairie, not only because it is perhaps perceived as unspectacular, but because only one-tenth of one percent of the former prairie still exists. One out of one thousand acres of the vast western midwest. The other 999 are now used to grow corn, or wheat, or run cattle, or have been paved over to make Wal-mart parking lots. These various concentrated monocrops have gravely diminished the biodiversity of the region, for healthy, unaltered shortgrass prairie like the Bluestem preserve, harbors up to three hundred species of wildflower and many special birds. 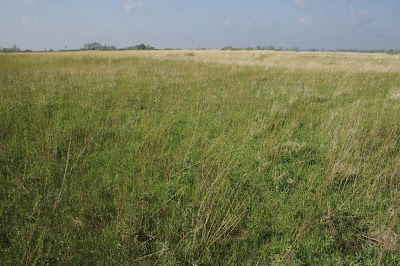 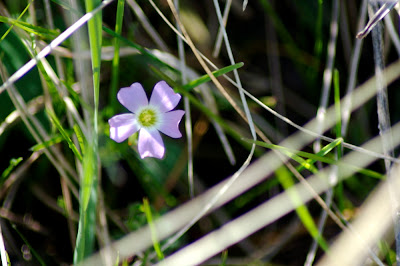 The delights of the prairie, varied and unexpected, but modest in scale, are to be found nestled in amongst its diverse grasses. Spring has come late this year, but purple, yellow, red and white wildflowers were blooming in clumps everywhere between the windblown stems of sedge. Mauve Pasque flowers, like tiny tulips; Marsh Marigolds, more like buttercups than marigolds, growing right out of puddles and the watery ditches; and Swamp Lousewort, a bizarre conate spiral protrusion dotted with yellow petals. A long-sought bird, the Sedge Wren, was common in the brushier patches of prairie, and another, the Upland Sandpiper, nests in its tall grasses. We found five of the latter patrolling the stubbly chaff of an adjacent field. 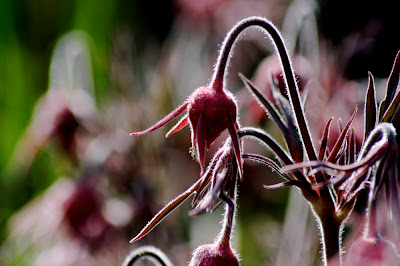 Not yet blooming: Prairie Smoke, Geum triflorum, aka "Old Man's Whiskers." When the plant flowers, clumps of hairy white tendrils emerge to wave in the breeze.

Heading for Duluth, the prairie and the plains imperceptibly receded in the rearview mirror, until, without quite noticing how it had happened, we found ourselves surrounded once again, for the first time since crossing the Rockies, with forest.