One of the joys of being trapped upstate, with only a day off here and there from filming circus folk preparing their show for the 2009 season, was that rather than tear back-and-forth to Brooklyn for brief hours of bill-paying and houseplant watering, I remained in the Hudson valley, taking each down day as a chance to explore. 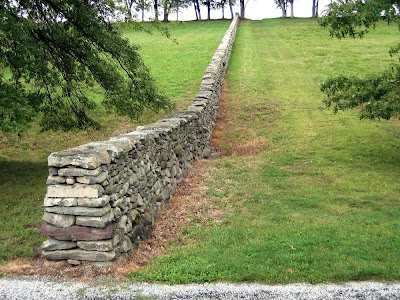 Amongst the local cultural wonders is the epic sculpture park called Storm King. Hard by the New York State Thruway--the vast plain dotted with gigantic Mark di Suvero sculptures is hard to miss, off to the left, on the drive north through Orange County--this 500-acres plus outdoor museum is one of the few places that actually has the luxury of real estate to show enormous examples of modern sculpture. On a recent, drizzly weekday, I had the vast grounds almost to myself.

I'm not a great fan of monumental modern sculpture. For me to see an enormous artwork as a success I have to first overcome the self-evident megalomania and material extravagance it represents. Few works stand up to this test, and a sculpture that succeeds only because of its enormity leaves a lot to be desired. More than one of the sculptures at Storm King would be unremarkable if shrunk to the size of a paperweight.

Andy Goldsworthy, however, seems to understand this problem. He has done some monumental pieces, but his work is almost always integrated painlessly into its natural environment, like good site-specific architecture. His Storm King Wall is, objectively, much the largest of all the works at Storm King, but he didn't import hundreds of tons of Korean steel to build it, and of all the sculptures there, it is the one perhaps most easily overlooked. He, or more likely his minions, collected hundreds of cubic yards of fieldstone, from local fields and collapsed stone walls, and built a new, albeit absurd and riverine, wall. It is utterly familiar in the way it divides field and pasture from forest, but unfamiliar, stunningly so, in its sinuous aspect. 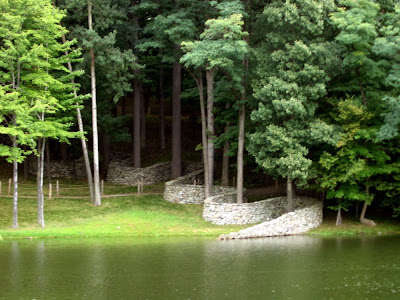 This is the essence of quality conceptual art, from Marcel Duchamp's urinal right through to the present day: to elevate a mundane, taken-for-granted object or situation and cause us to reconsider it with the fullest concentration we have to offer. 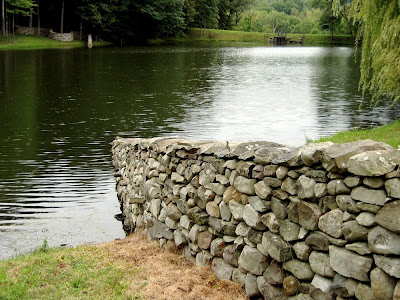 Goldsworthy's wall starts at the Interstate and descends the hill, straight, and normal, before taking a slight bend and plunging into the lake. Away, across on the other side, it can be seen reemerging, as if the local landscape had suffered some epic flood. One must then walk right the way around the water to find it curving and winding its way up into the woods, more like a streambed in shape than a wall. It wriggles through the trees. Indisputably it is a wall, but one without apparent function, a subversive wall, or the subversion of a wall. We are now wondering what it is, if it isn't really a wall at all, but something else; or, being that it is manifestly a wall, we must ask ourselves, do we really know what a wall is? Add to this its appealing curves, its careful dance through the forest, its showcasing of the trees, which we now also spend more time with. 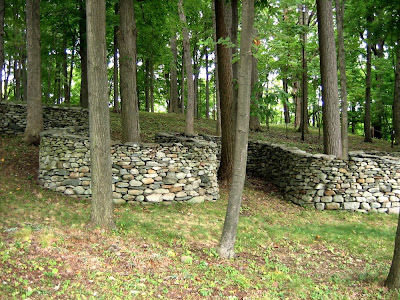 To pose these questions and also make something truly beautiful, massive, and serpentine is a major artistic achievement. I followed the curves, winding my way up the hill, and then sat on a bench, where I found myself staring at the wall.

What I can only describe as a very nice old lady came and sat down beside me. She was a museum guard, but one of an unthreateningly advanced age, the sort of kindly retiree generally found manning the tables at a church rummage sale. She enjoyed the job, I sensed, because of the opportunities it brought to talk to visitors. "A lot of work," I noted.

"It's two-thousand-seventy-eight feet and six inches long," she said.

"How many people did it take to build it?"

"They brought a team of craftsmen from England. Five of them." Professional wall builders. "It took them sixteen weeks."

We looked again at the massive, solid construction, curling and waving its way down towards the distant lake. "That seems awfully fast," I said. "Let's do the calculation." She laughed. I scribbled. "Twenty-four feet per day," I announced. Or roughly four feet, nine inches, per man, per day. It seemed plausible, for an accomplished tradesman.

"We had to call them back recently," she said. She pointed to a paler blue patch of wall, a repaired area of newer stones that I wouldn't otherwise have noticed. "A tree fell on it. I told one visitor about it and they got all huffy with me. He kept going on about 'had we called Goldsworthy first, before we had it fixed?' I said it is our wall, after all, and so we repaired it. He got real upset. He kept saying how Goldsworthy believes the natural process of the thing falling apart is part of the artwork. Whew. Some people take these things so seriously."

"I wouldn't worry about it," I said. "In the geologic scheme of things this wall has plenty of time to fall down."

"After what we paid for it I should think we can do with it as we please," she said. 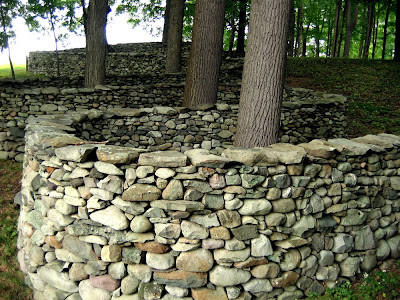 That. is a wall. It is not very straight; neither are metaphors about life.

Rich -
I love this (your pictures, writing, Goldsworthy, etc.). - Ted (I'll send you an attempt of mine)

Whenever I am on a rocky beach, I do one. - Ted