We used to call it Skitching... 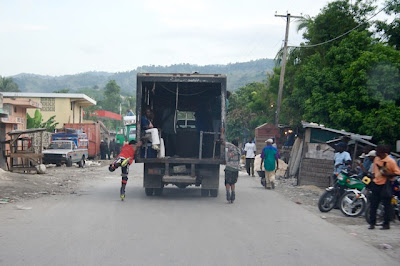 I'm in Haiti for a week, teaching sound recording techniques to a group of Jacmellian film students. I came here often in the 1990s, working on a wide variety of films, but it had been over ten years since I last landed in the steaming chaos of Port au Prince. The streets are still piled with garbage, and the open sewers are still running a muddy gray-brown, silted full of topsoil runoff from the devastated, deforested mountains of the interior. The grim conditions of the sweltering, overcrowded city make for a kind of reckless abandon, and an infectious, collective madness, personified for me by these two heavily tattooed rollerbladers, dressed in camouflage and kneepads, who swooped up to the back of this truck during a pause in traffic, and then kept hold for miles, doing hair-raising leaps and tricks while dragging along behind.
We used to do this sort of thing at much slower speeds, when it snowed so heavily that we could slither down snowpacked Nassau Street, gripping car bumpers and sliding on the soles of our sneakers.