Fishing for the essence of photography

Once again I've been thinking hard about photography, and its uses, because above and beyond printing my forthcoming magnum opus, my publisher, Commons Books, is also soon to release a companion book of photographs I took in Cuba, while I was walking about the place. So I've been revisiting Roland Barthes,

and Susan Sontag, and some of the other theoreticians of the medium, who I often neglected back in college. Why is it that photography is the bastard stepchild of the art world? What it is about the medium that prevents it from being taken seriously, that makes it so difficult to hang a photograph in a museum next to a painting, instead of in its own little ghetto of flat, glossy bits of paper?

Whether or not you are into theory, a major issue seems to be that the very ubiquity of photographs, the ever-increasing ease of making and displaying them, conspires against their perceived value. Millions of photographs must now be taken every day across the globe, and the vast majority of them are purely commemorative. They are taken to capture moments and experiences; they are of weddings, birthdays, visits to places or people, automobile accidents, and large buildings. The commemorative object (the blue ribbon at the horse fair, the bowling trophy, the snapshot) is almost by definition not a piece of art; it invokes not its own qualties, but seeks rather to conjure the emotions and recollections of a past glory or achievement, even one as modest as standing in front of the chain-link fence at ground zero. Contrast this with painting, sculpture, or poetry, the very undertaking of which implies an artistic intent. 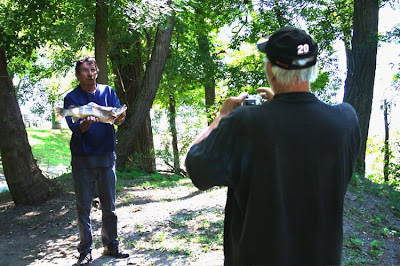 On a recent day off here in upstate New York, we drove from Newburgh, down route 9W, to the temptingly named Sloop Hill State Unique Area. We are suckers for the unique, hence one of photography's problems. Sloop Hill turned out to be a small and charming park beside the wide Hudson, where, in deep shade, surrounded by pockets of burning sunshine, a group of fishing enthusiasts had gathered to memorialize the catching of a trout. It is easy to take pictures of people taking pictures, because your subjects themselves are busy asserting the normalcy of picture-taking and are therefore ill-equipped to argue that you are invading their privacy.

We snapped, and bantered. The trout had not been caught in the river, but elsewhere, in a reservoir. I failed to ask why it had been brought here, in a large red cooler (not pictured) to be photographed. It weighed more than 7 pounds, and was the largest trout the man holding it had ever seen.

Because of the challenging light conditions, or perhaps because he seemed to think it unseemly that I should take more photographs of the man and his fish, than he, the man's friend, might take, the photographer snapped again and again, providing many angles from which I was able to capture the process of the fish being memorialized. For each picture that he took of a man holding a fish, I was able to take my own picture, of a man taking a picture of a fish-holding man. Through it all, the subject remained impassive, his unwavering, emotionless face betraying not a hint of a smile, or a suggestion of pride, as if the enormous, glorious cadaver should be allowed to speak for itself. 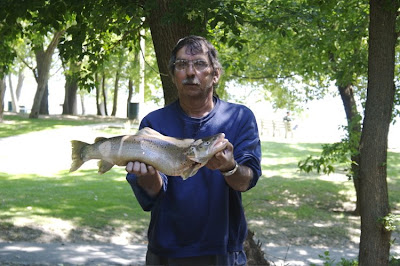 I may not know what art is, but I know what I like.

hey Rich, I'm coming to NYC for the film showing Oct 16!! write me at driveallnite@hotmail.com.

I'll be buying your book then too, and I want a signed copy!