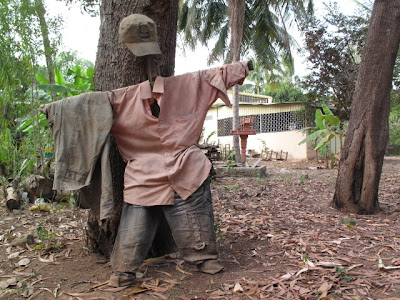 As usual on trips so densely packed with new and exciting experiences as this, I'm falling savagely behind on my blog posts. Combine the constant onslaught of new sights and sounds with the sentiment that "I didn't fly halfway around the world to sit in an internet cafe" and you will begin to understand the backlog. I've been back in Vietnam two weeks already since Laura and I visited Angkor Wat, but I'm still blogging my way through Cambodia. Expect to be hearing about Southeast Asia for weeks after my return.... 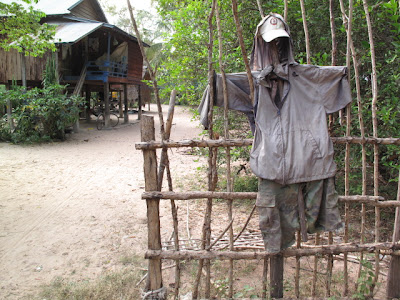 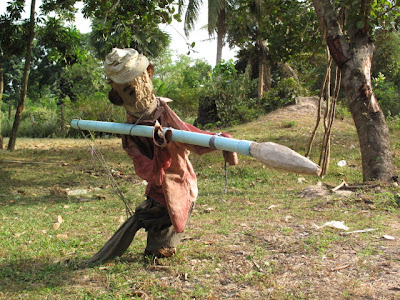 Regular readers know that I'm always interested in the supernatural interventions people across the globe choose to put their faith in. My sister-in-law, Melanie, is a foremost world expert in South Indian techniques for avoiding the "evil-eye," and I share her fascination for these sorts of vernacular expressions of superstition, magic and belief. The sociology of the ways in which talismans, amulets, altars, shrines and so on are manifested across the globe is often obscure, but in Cambodia, driving in the countryside, we again and again encountered houses protected by "scare-ghosts," whose genesis and form seems to make obvious sense in the wake of the Cambodian genocide. There is scarcely anything metaphorical about them. 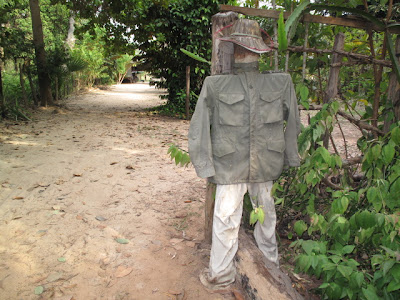 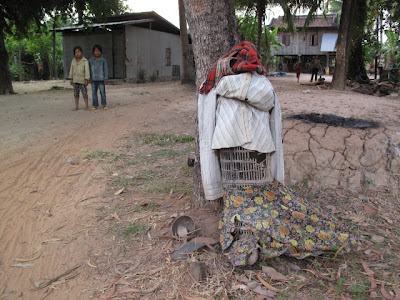 Invariably constructed at the gateway to the front yard, the Cambodian anti-ghost version of a scarecrow is impressively humanoid. An old shirt, torn trousers and some sort of head are usually enough to construct one, but these protectors, stand-ins for an armed guard at the doorway, often have an evident militaristic aspect. They often sport bits of old military uniform, and sometimes a weapon. 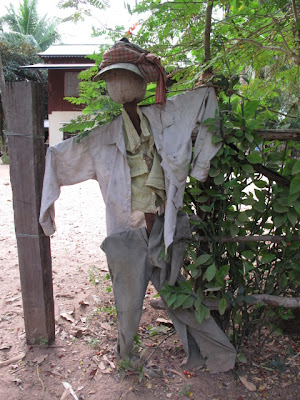 Our Tuk-tuk driver, the incomparable Mr. Boret (well, we considered him incomparable until he stood us up the next day when we had scheduled a ride to the airport) explained that these "puppets" (a loaded word in and of itself in Southeast Asia, as it historically described local collaborators with the Imperialist Yanqui) are placed in front of homes to protect against ghosts, who come at night and take people away. Cambodia, obviously has many of them. 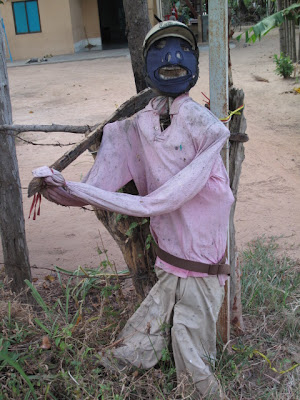 A series of great posts. Give us more...please.

Fascinating. I am reminded of the Scarecrow in The Wizard of Oz. Perhaps these are better named Scarefoes. Really enjoying your posts.

love these effigies! Super interesting, and very similar in form to the ones you see in Tamil Nadu. Thanks for the shout-out, bro-in-law!