Cambodian Land Mine Victims' Orchestra on NPR's "The World" 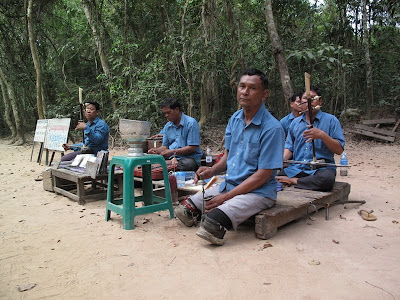 This news may be a bit late, since I've already heard from an old friend in Los Angeles that she heard me on the radio while she was driving to work, but PRI's "The World" had my audio postcard from the market of Siem Riep on their Wednesday program. In case you missed it, such things are archived, thanks to the glorious internet. They've credited my photograph of the Cambodian flag to my long lost (imaginary) brother Peter, but I think that's just a typo. Or they've mixed me up with my fellow travel writer, the late author of the superlative Brazilian Adventure. Company I'm happy to be confused with. 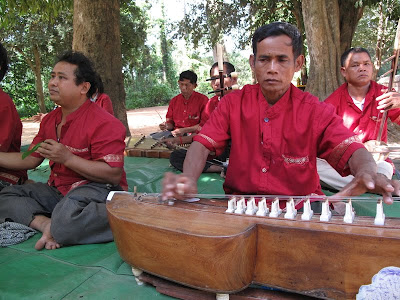 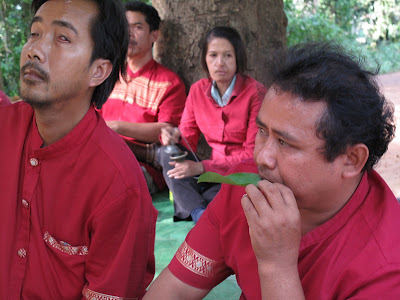 The "audio postcard" includes my recording of a Cambodian land mine victims' orchestra. Such orchestras, composed of disabled players, are numerous in the touristy Siem Riep area, and at various temples in the vast and impressive Angkor complex. They are intended to tug at your heartstrings, as well they should. Some of the disabled players are war victims from Cambodia's savage 1970s, but the sad reality is that mine victims in Cambodia can be of any age and may have sustained their crippling wounds at any time in the last 40 years. Cambodia remains one of the most heavily mined countries on earth despite constant efforts at removal, and many, many people are killed and wounded each year by ancient mines that have long outlived the heinous military conflicts that saw them installed. Imagine living in a country at peace, trying to forget the horrors of the past, while living with the constant threat of being exploded in your own rice paddy.