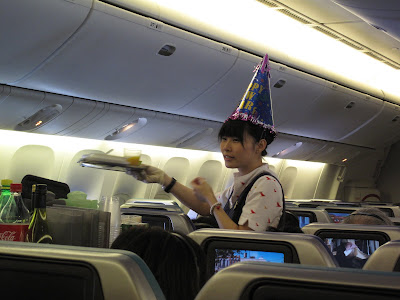 A handful of hours after takeoff on December 31st, which is to say at about noon New York time, we celebrated New Year's with a brief announcement from the Cathay Pacific cockpit that it was countdown time in Hong Kong. Given the sun shining outside the windows as we flew north over Ontario, it was a bit difficult to get too excited about it, but the chief steward promptly handed out dunce caps to the crew. All tried bashfully to refuse to wear them, but a directive had been issued from somewhere, and on went the hats. Four minutes later, there wasn't a single one to be seen. In the brief interval, I took photos, perhaps adding to the stewardesses' sense of unease.

Email ThisBlogThis!Share to TwitterShare to FacebookShare to Pinterest
Labels: holidays

Isn't February 3rd the day when the Year of the Rabbit starts? No wonder the flight attendants got uneasy. They must have felt like a Lufthansa crew ordered to celebrate Ramadan on a return flight from Saudi-Arabia. I guess there's a fine line between cultural courtesy and PC/PR travesty.