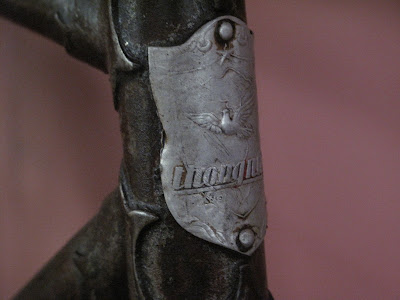 For your cycling pleasure, here is the Vietnamese edition of the Flying Pigeon. It is identical in all structural and mechanical aspects to the bike I rode across Cuba, except that this version has a more modern system of brakes and levers. The fact that in Vietnam this is a certified Viet Cong relic, given its own two square meters of red carpet and a plinth, whereas in Cuba hundreds of thousands of these are still on the road today, tells you much about the countries' two very different strategies for dealing with their post-Soviet growing pains. 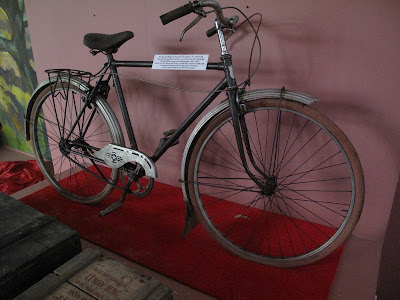 The bicycle is on display in the museum at the site of the "Peace Bridge" over the Ben Hai river, the official dividing line between North and South Vietnam, at the center of the DMZ, the poorly-named "Demilitarized Zone." In this context the metaphorical importance of the bicycle is obvious. The centerpiece of the one room museum is a diorama of struggling, pajama-clad villagers raising battered AK-47s and triumphantly charging a phalanx of Imperialist Running Dog tanks and helicopters. The authentic, humble, cast-iron, one-speed Chinese bicycle serves the same role as would a pair of sandals made from an old tire. It represents the modesty of the tools at the disposal of the North Vietnamese and the dire limitations of their resources, which they nonetheless overcame with their perseverance and dedication, despite the tremendous odds against them.