No Country For Old Birds 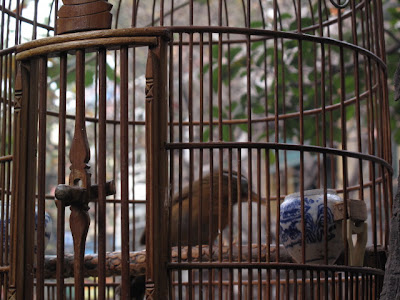 Caged Hwamei (Melodious Laughingthrush), Hanoi. I have yet to see one in the wild.

It has been more than ten years since my last intensive birding exploration of Asia, and I had forgotten just how oppressive this continent can be, if you happen to be a bird. It isn't that people here don't love our little feathered friends, it's that they love them so much that they want to keep them in cages at home, or eat them as crispy fried snacks. One Vietnamese in Dalat put it to me this way: "Vietnam people don't want to have to go to the forest to hear birds sing. They like it, and they want to have birds at home, so they can hear it every day!" Between the hunting, the trapping, the snacking, and the shooting of birds with slingshots, a perfectly acceptable pastime for small boys here, the avian world in Vietnam is under constant attack. (Anecdotal reports suggests that in neighboring Laos the situation is far worse; travelers report seeing nary a wild bird there, and of walking in forests almost devoid of birdsong).

The results of this human versus bird armageddon are that even in the deepest, best protected forests, the birds are very, very wary. The innocent birder who wishes nothing more than to see the poor little critters through some high-quality optics must settle for distant views of cautious and skittish creatures going out of their way to place leaves, trunks and branches between themselves and any visitor. Even families of birds that elsewhere in the world are often curious and confiding, like the genus Parus, the titmice and chickadees of European and North American feeders, stay at least three times as far away from intruding humans as they would on other continents. One must be patient and silent.

Here's a compilation of threats I've encountered in my travels here:

1. At a coastal forest preserve near Binh Chau I came upon this concerted effort to catch terrestrial gamebirds, such as pheasants, partridges and silverbacks. I saw similar snares on Sulawesi in Indonesia fifteen years ago. The pictures are a bit difficult to follow, as the whole idea is that the traps blend into the forest background. 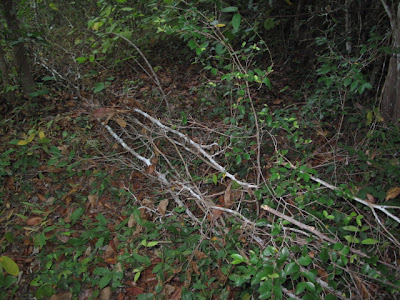 Over a long stretch where secondary forest bordered on a clearing, perhaps several hundred meters, someone had created an obstacle course of chopped brambles, twigs and brush. Note the diagonal line of brush running from the upper left to the lower right, above. It is only about eighteen inches high, but heavier, meatier birds like pheasants and partridges are reluctant to fly unless absolutely obliged to, and the spines and tangle of these narrow twigs prevents them from easily hopping over. Every five meters or so the hunter leaves a gap in the "fence" for the bird (or small mammal) to pass through on the way back from feeding in the clearing to the relative security of the forest. Across the gap is the hair-trigger for the snare, below. 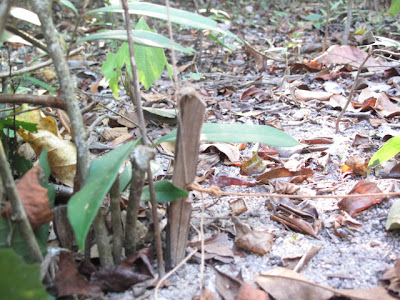 Note the horizontal string across the lower third of the right hand half of the image above. When the bird hits this string, the trigger is jostled, and the loop, held in tension by a bent sapling, yanks the bird into the air. Below is an image of the tripwire from above. The vertical string to the upper left is attached to a springy, bent-over branch. 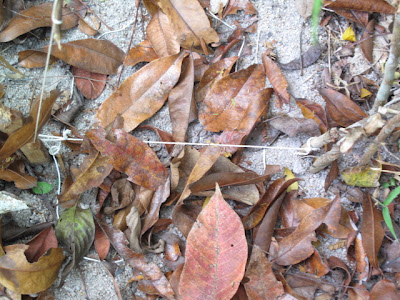 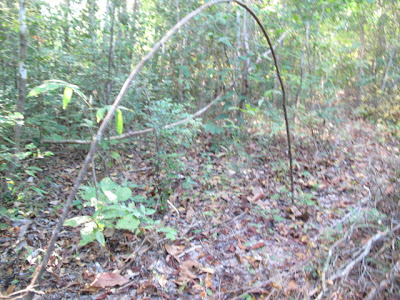 Above is the sapling, bent over by the tensioned string. Below, the taught string, before I released the mechanism. 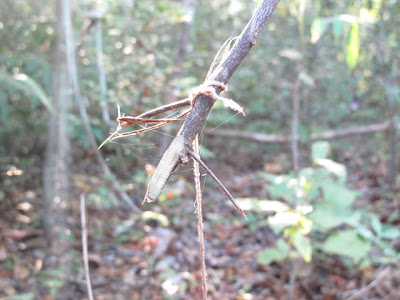 2. Those birds not destined for the pot, or the skewer, tend to be champion singers, prized for their morning serenade. While life in a cage is perhaps preferable to being eaten, the number of caged birds in Vietnam is staggering. Walking down busy urban streets in the early morning one hears all manner of deepwoods jungle species calling out from tiny wicker homes hung on balconies and from the eaves of homes and businesses.
Below, a bird shop in Hanoi. 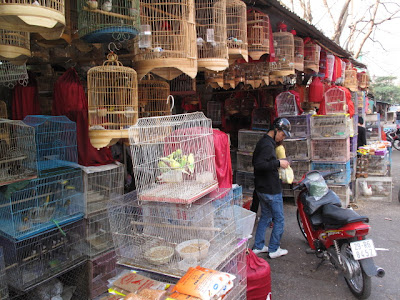 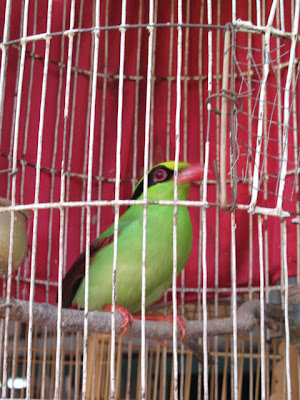 Green Magpie. I have yet to see one in the wild.

3. So-called mist nets are used by scientists to catch forest birds without harming them, so that they can be measured, weighed, banded and released. But very fine fishing nets work just as well, to catch birds for food or for the cage trade. At the bottom of a trail outside of Dalat, well-known to birders, at the southern end of Lake Ho Tuyen Lam, I found at least a hundred meters of this netting strung in a loop around a wooded stream. The sites favored by birders are also interesting to the trappers. This netting was in poor condition, and to judge by the dead Mountain Fulvettas it had caught, was not being regularly attended (or perhaps Mountain Fulvetta is a worthless species to the trapper and he therefore had not even bothered to untangle these corpses). 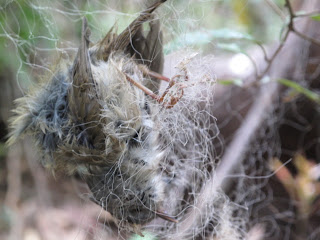 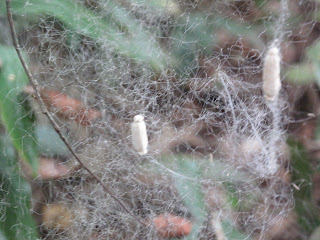 The small white lozenge in the center of this net is a float; these are very fine gauge gill nets used locally for fishing small species of freshwater fish. 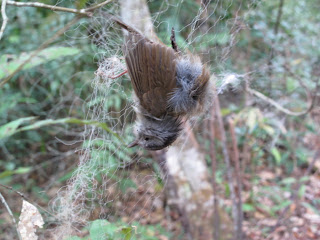 I'm afraid I admit to having at it with my pocket knife. I cut down, shredded and balled up all the netting I could pull out of the bushes. Like the thousands of miles of "ghost nets" abandoned or broken off and drifting on the high seas, fishing on and on for fish that will never be eaten, netting like this will continue to catch and exterminate birds indefinitely, until wind and broken branches tangle it into inefficiency.

4. Scene: A long row of foodstalls at the Sapa barbecue pavilion in extreme northwest Vietnam. The vendors clamor for each passing visitor to choose their particular restaurant, which is much the same as all the others. 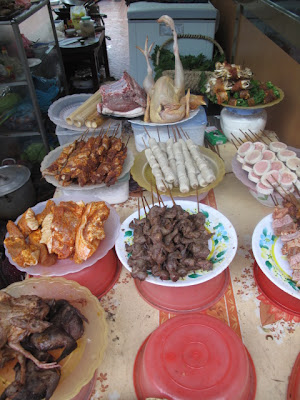 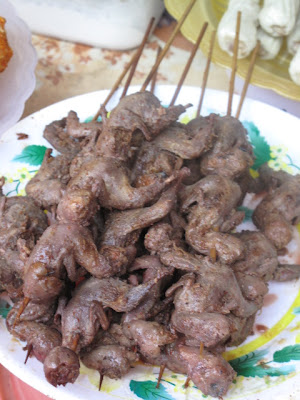 Me: What's that, next to the marinated pork ribs and the broccoli-rabesque vegetable wrapped in beef tenderloin?
Girl: Birds. Small birds. (I look incredulous, or perhaps mystified. The girl flaps her arms like wings and repeats). 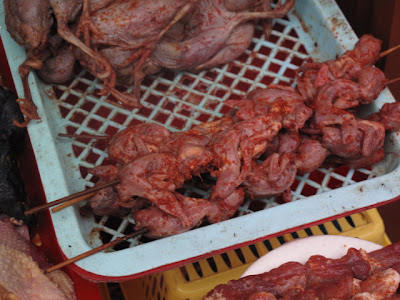 I will appreciate the early sounds of birds interrupting my sleep in the otherwise quiet community of Shady Grove, AR more than ever before. I was not aware of the plight of songbirds in Viet Nam. Thanks for the blog.

The Vietnamese eat them, and we let our cats eat them...