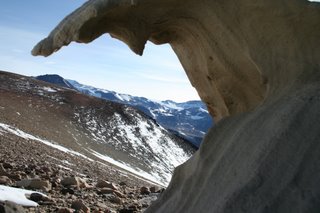 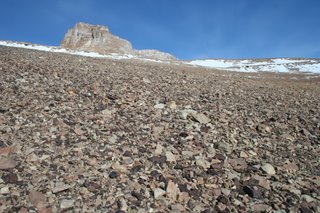 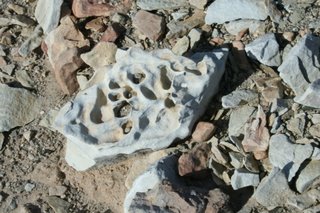 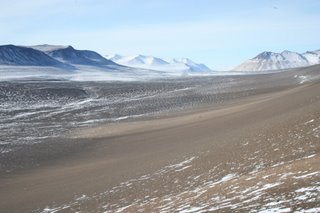 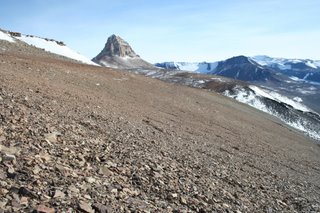 One hates to start two posts in a row with hackneyed observations, but after just over a week out here, as trite as it might sound, I must remark that our ability as humans to adapt really is remarkable. Yes, we live in tents and drink snow and consider four degrees F as the balmy tropical height of a sun-filled day, but things have achieved a certain normalcy. We have a routine going. We are eating well, and sleeping well. We film, we cook, we eat. All in subzero temperatures on this remote mountain saddle perched high above one of the dry valleys.

Between takes, as it were, I have even managed a couple of sublime hikes, one across a large empty depression presumably abandoned many millenia ago by one of the local glaciers, and a more ambitious walk yesterday when I descended to the floor of the McElvey valley, which stretches towards the sea some seven hundred meters below us. Walking west across rocky scree around the sort of apron of Mt. Boreas on which we are camped I found after an hour or so a channel, perhaps the path of some ancient glacial flow, sloping in comparative gentleness down to the valley before. It was nonetheless a toe-jamming descent requiring an hour of zig-zagging back and forth across an infinity of gravel.

I saw rocks. Many, many, rocks. Mt. Boreas has been shedding chunks of rock for millions of years, like dandruff. As I worked my way downhill I became convinced that our government spends so much time, effort and money in Antarctica largely in order to safeguard the Dry Valleys as a future fieldstone quarry, should this important natural resource one day grow scarce.

I saw rocks, small rocks, rocks perhaps the size of your fist, which have sat undisturbed and in the same orientation for thousands, hundreds of thousands, and perhaps millions of years. Never, or perhaps almost never, does any water flow here; there are no aqueous erosive processes of any kind. You may ask how it is that I know these small fist-sized rocks have not moved in all this time. You might ask why this would be interesting were it true. The answer to both your queries is the same; many of the rocks I saw were drilled full of minute holes and had the appearance of a chunk of swiss cheese, but only on the uppermost surface. Over the millennia endless grains of sand and grit drilled these holes with an inconceivable, insensate patience. After first catching in a tiny depression or hospitable corner of the rock, in a spot just friendly enough to entice, over thousands of years, more grains into swirling there than on the adjacent surfaces, blowing sand makes its mark, until the resulting excavatory activity becomes a self-fulfilling prophesy. A small tunnel fills with grit and the mouth of the hole invites more grains to the party, the whole swirling about like margaritas in a blender, accelerating the drilling. Imagine that countless grains of sand, blowing across a chunk of basalt, might require the entire length of recorded human history to make so much as the finest microscopic indentation on it and the mind boggles. Walking across such rocks, inevitably dislodging and disturbing some, one feels guilty of some monumental environmental crime; I understood Jainists and their refusal to so much as get out of bed lest in the process they crush to death some insignificant insect.

But enough focus on the minutiae; stretched out below me was the McElvey valley, subdivided into a panoramic vista of polygonal cracking, like a former pond drying in the African sun at the start of the dry season. Here the earth cracks in much larger polygons, presumably as the surface layer above the permafrost warms in the sun and shrinks. The cracks fill with snow, outlining their geometric shapes. Most are pentagons, some squarish, and others sextagonal; the bits of land pull on one another and subsurface frictions seem to determine the final shape. The polygons are generally fifteen to twenty feet across, and upon arriving at the bottom I walked over a large field of them. The cracks are ancient, and are not really crevasses. Filled with sand and blown gravel and topped with hard snow, they can safely be walked on.

I had expected the valley to slope gently down towards the Ross Sea, but in fact I found myself in a bowl-like depression in the midst of gentle undulations. The sun was strong. I sat on a boulder and ate gorp and thought how lovely it would be to have a cup of tea. It was then that I discovered I had forgotten to bring any teabags, and so i had to make do with a refreshing cup of hot water. Neither this minor disappointment, nor the mighty toil of the subsequent marathon spent climbing back up, up, and further up home to tent and stove, did anything in the least to diminish the wonderful experience of hours spent tramping across the stark and pristine landscape.