The Saga of the Blue Cooler 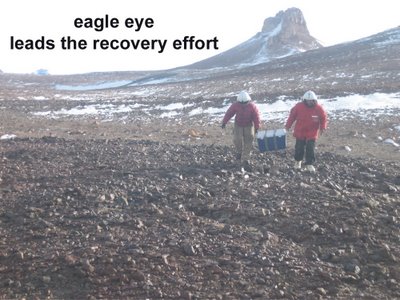 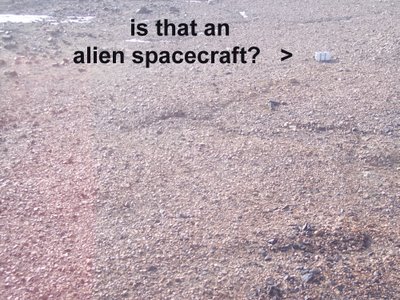 It is amazing to think that we will be back in McMurdo in just a week. Time flies when you are miserable and cold and starving. I'm kidding. It's paradise here. Pass me a banana. Actually, despite living life at zero degrees and not having bathed in over six weeks or seen anything green to eat, the lifestyle is growing on me. I suppose I don't need to tell you, though--what was it? Eighteen years you spent living off the grid in a cabin in Wyoming, eating nothing but venison jerky you shot and smoked yourself? No wonder you're so well-adjusted.

Having no idea what day of the week it and realizing it makes no difference whether I paid my credit card bill or not is very liberating and appealing. Here, all of the static fuzz of everyday modern life has receded off into the inconsequential horizon.

Nonetheless, it is the little comforts that see one through. I remember how happy I was five weeks ago when a tub of miso arrived with our first mail. I cherished it, I rationed it fascistically, and by the time we came to move from Mt. Boreas to our camp here in the Friis Hills I had only allowed myself a few stingy dollops of the precious paste. At the last possible moment I tucked it reverentially into the corner of a blue Coleman cooler, which Anne sealed with duct tape and carried up the hill to await transport with the rest of our towering mountain of gear. I have already written to you of the drudgery of that day; Sylvestre, Adam, Kelly and I flew first. Loads and loads of stuff slung from the bottom of helicopters and packed into every cranny of the flight cabins arrived all day long at our new site. We stacked rock boxes full of food on the lip of the tents, opened boxes of stoves, laid out sleeping bags and cots. It was a chaos of unpacking. I wondered: where is my miso?

"Didn't we have three coolers altogether?"

"Yeah, I dunno; so far only two have turned up."

I went to see the geologists.

"Do you guys have an extra cooler of ours mixed in with your stuff?"

We double and triple checked. A posse of us went up and marched in circles around the helo landing zone, in case the cooler languished there, forgotten.

Perhaps it had remained on board, slid under the seat of the helicopter. We called helo-ops on the radio.

"Do you mind checking with the helo-techs, just to be sure, please?"

"You're going to have to write this up in your end-of-season report," Adam Lewis told Anne. "They have a lot of surface area, those coolers. Did you put a rock on it? Maybe the rotor wash blew it off the mountain. The bad news is we might have to burn up some of our helicopter hours to go and look for it."

My little tub of miso was turning into a global environmental catastrophe on the order of the Exxon Valdez. We called helo-ops again.

"Do we need to do anything about this? Over."

They didn't, and we breathed easier, imagining ourselves to have slipped through the mesh of an extensive administrative dragnet. Over the following weeks we continued to keep a low profile, hoping to avoid a Congressional inquiry.

Meanwhile, known to us to be sharing cooler space with my tub of paste, were a bag of tortilla chips, a sack of frozen bagels, and a box of kitchen matches, wrapped in tin foil. A treasure-trove for future scientists who might stumble upon it. It became a kind of a joke. Whenever anything went missing it was said to be in the cooler.

"Have you seen the hammer?"

But I missed my miso. Why hadn't I gobbled it all up when I had the chance? Lived for the moment? Carpe'd the diem?

Last week, the geologists announced that they were going to the top of the Insel Range on an exploratory day trip.

"We'll be flying right over the old Boreas camp," whispered Adam. "We're going to have a quick look and see if we see it down there."

Eager to contribute to the effort, I lent them my binoculars, and then left on a long solo hike, to distract myself from the inevitable agony of uncertainty and anticipation.

That evening, when I returned, battered and trail-weary, we sat and waited. The geological fact-finding party was late returning, inexplicably delayed. At last, at almost ten at night, we heard a whirr of rotor blades far off in the distance, from the direction of the Pearse Valley. Soon the helicopter came into view, landing minutes later in a tidal wave of blowing snow and sand. It was easy to imagine how such a blast might have swept a cooler over and off the back of Boreas. I pictured it rolling, end over end down the valley, pushed by the katabatic winds. In the month that had passed it might have traveled quite far.

Gina, the helo-tech, disembarked under the beating blades. Watching from a safe distance I saw her helping the geologists unstrap themselves and descend from the helo. Then she was unbuckling the webbing of the cargo storage compartment and getting out their backpacks. Then.... Was it? It was! In no time Adam and Andrew, heads bowed to avoid the rotor blades, each holding a handle of the cooler, were running purposefully towards me, like Vietnam triage medics hurrying a stretcher across a battlefield.

It had blown down the hill and rested upside down for a month, but my miso paste was unscathed. Gina had spotted it near my old tent site, they said.

Crackling through their headsets, while they were still at least a mile out, had come: "Is it blue, with a white top?" Eagle-eye Gina, they were calling her.

The wind's picking up again. I think I'll have another warming cup of soup. Mmmmm.

One of your best. Ask me some time about the saga of the brass andirons back here on Hartley Avenue.
M

Rich,
If on this planet there is any living antithesis to Karl Marx' theory of "the being of men determines their conciousness" it must be you culinary snob out there on the ice! Thanks for keeping me amused through the dark Berlin winter,