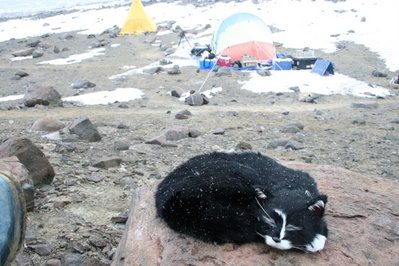 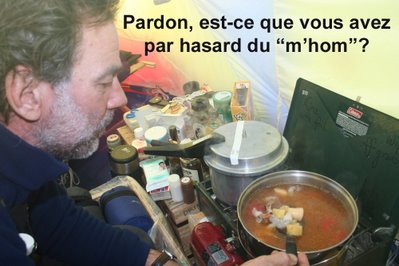 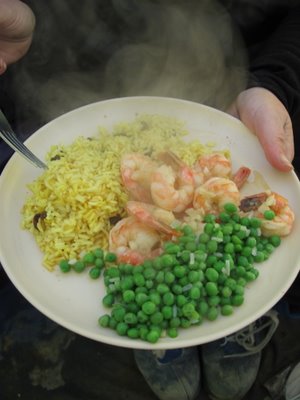 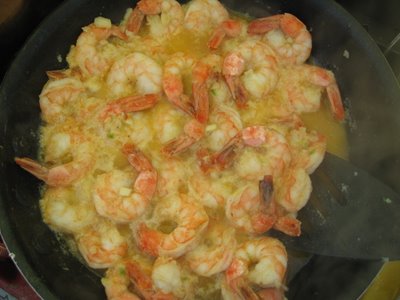 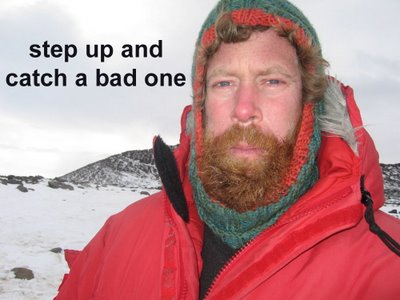 We all can't thank you enough for the deluge of snacks and treats that arrived on a helo last week. Not a thing came from overseas, which I have now come to think of as "off-continent," but the outpouring of warmth from all our friends in McMurdo made us feel missed, at least locally. Thanks to Holly for abundant chocolate and marshmallows, Katie for all sorts of goodies pirated directly from a care package she herself had just received, and Helen for a stuffed dead cat, to keep us company. I think. Most of all I want to extend to you my personal gratitude for your unswerving dedication to keeping antarcticiana updated and online, and for your gift. Folks back in the so-called civilized world might think one single head of garlic a meagre present, especially compared to the cornucopia of riches it arrived with, but they just don't understand the situation here. With all due respect, thanks and hugs to everyone else, I have to declare your gift the most exciting and welcome of all. For weeks we have been subsisting on a starchy, fatty diet which taxes our culinary inventiveness to the fullest, not to mention our gastrointestinal tracts. The closest we ever get to "green," or "fresh," are some dehydrated slivers of onion that look like toenail clippings, and the odd frozen pea. Nonetheless an intermittent competition to see who can do the most with the least, rages on, at least in my tortured mind. Anne has brought many delightful prepared french delicacies she snuck past the customs agents of several different countries, not to mention she makes a mean braised pork loin, with mushrooms and re-hy potatoes. Sylvestre does a killer shrimp and scallop soup with pineapple cubes and sambal, which he calls Sala Mitsu and claims is the national dish of Cambodia. It is super-delicious despite the utter scarcity hereabouts of an herb known to him and to all Quebecois-vietnamese greengrocers only as "m'hom," but Syvestre would be the first to admit that he is a one-trick pony. To put it in hockey terms, once the front line sits down there is pretty much nobody with a slap-shot left skating on the ice. As for myself, with my well-established arsenal of cornmeal and shredded beef-jerky feijoada, Skippy-peanut-butter-miso-curry-ramen, flour tortilla-au-chocolate bar fondu, and my devastating masterpiece, an Italian sweet sausage and lentil pilaf-biryani hybrid, I have been confident since early on, and I remain sure of my ability to annihilate any and all comers who dare to step in front of the dual burners of the Coleman 425. Nonetheless, your shipment of the super top secret real and authentic special forces garlic, by express helicopter was like giving an RPG launcher to someone who until then has been firing away with a rusty six-shooter. I include some photographs of the feast which followed the hallowed arrival of the garlic, prepared by moi: gambas-al-ajillo, "armenian" turmeric and currant pulao, and congele de petit pois aux onions et beurre.

What's more, I still have a few cloves left!

With continued thanks,
Rich

its so good to see my fellow chowhounder carrying on the tradition of dining on fine intercontinental cuisine.. even under the most harrowing conditions.
that's hardcore.

Wish you could help with our Thanksgiving leftovers -
I'll be making Turkey curry tonight.
M