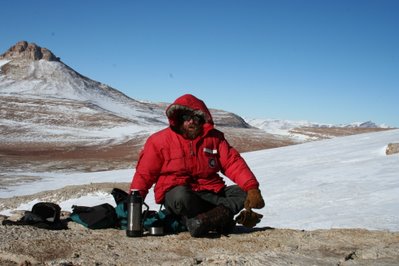 In my ongoing effort to devour the literature of the great polar explorers of yore, I'm currently snuggling up with Sir Douglas Mawson's "The Home of the Blizzard" each night, at least for the small window of minutes between burrowing into the sleeping bag and the moment of extinguishing the stove, after which I promptly pull the drawstring tight over my head and hug the hot-water bottle as I slip into total sackage. As Sara Wheeler has it in her book "Terra Incognita," Mawson is the fourth of the "big four" antarctic explorers, and certainly the least known, after Scott, Shackleton, and Amundsen (this last coming in a shocking third in the fame stakes, despite being the one who actually made it to the south pole...). Mawson is lesser-known both because he was Australian and because he gave not a fig for the pole; his exploration of Adelie land had neither headline-grabbing goals nor results. Mawson studied rocks, and by complete coincidence I happen to be reading his exploits while camped with four hungry geologists.

Mawson and his posse were the first to winter in the glacier and crevasse-ridden Adelie land. Based on his account this region of Antarctica experiences one extended hurricane from late January until Halloween; in many months he records average wind speeds over fifty miles an hour over the course of the entire month. "A plunge into the writhing storm-whirl stamps upon the senses an indelible and awful impression seldom equalled in the whole gamut of natural experience. The world a void, grisly, fierce and appalling," he writes.

As soon as summer arrives Mawson divides his men into a half a dozen parties and they sledge out into the wilds in all directions in gale-force storms of thirty to forty miles per hour, winds they have come to think of as balmy breezes. "The Home of the Blizzard" so far fails to paint a strong picture of what the various parties were looking for, beyond passable routes to nowhere. They took many temperature readings, investigated black lumps protruding from the snow, found them generally to be mountains, noted the weather and the wind-speed, shot and skinned birds and suffered terribly.

Mawson's very own party of three had by far the worst of it. Theirs was the most ambitious, and the most southerly of routes. With twelve dogs he, Xavier Mertz and Lieutenant B. E. S. Ninnis dragged two sledges over endlessly white, treacherous terrain, bouncing and rolling over invisible sastrugi and plunging into crevasses. That the two massive glaciers lapping out onto the sea-ice to the east of the expedition's base camp are today named Mertz Glacier and Ninnis Glacier gives some idea of what was to pass.

Only a few days before reaching their projected outermost point, from which they were due to turn back in order to make a rendezvous deadline with all parties in mid-January, on a sunny and calm December 14th, Mertz led the group on skis, giving the dogs someone to chase after. Pausing, he held up his ski-stick (skiers at the time used only one pole) to indicate a possible danger zone. Just after, Mawson, passing the spot, noticed "the faint indication of a crevasse," but "it had no appearance of being in any way especially dangerous." Nonetheless he shouted back a warning as he continued across. Seconds later Ninnis, the six best dogs, the tent, and the bulk of the party's food disappeared without a sound. Because it was always the lead dogs of the first sledge that tended to fall into crevasses, there to dangle by their harnesses until rescued, all of the mission-critical equipment was relegated to the trailing sledge. Shocked, horrified and bereaved, Mertz and Mawson were also in grave danger; weeks out from camp without shelter or rations, their prospects were dim indeed. "When comrades tramp the road to anywhere through a lonely blizzard-ridden land in hunger, want and weariness the interests, ties and fates of each are interwoven in a wondrous fabric of friendship and affection," he wrote, of Ninnis' death. Even in the comparatively unperilous Antarctica of today such sentiment is not out of place; one McMurdoite after another told me of the strong bonds and sense of community they have found here amongst the small fraternity that shared, for instance, their winter-over.

One hundred and fifty feet below them, through a sledge-sized hole, Mawson and Mertz could see only one dog, its back broken, dying on an outcropping of ice. The crevasse continued, down into darkness. The men harnessed their remaining six scraggly dogs and made an about face. Dinner that night was made by boiling their empty food bags; the dogs were fed "worn out fur mitts, finnesko and several spare rawhide straps all of which they devoured." They had three hundred miles to travel, with no food depoted, as they had planned on making a loop and returning via a new route. First they ate George, a feeble dog. "Though some of the best meat was reserved for ourselves it was a very poor sample, chiefly sinews with a very undesirable taste." Next to go was Johnson. "He could never be accused of being a handsome dog, in fact he was generally disreputable and dirty, curiously enough these latter qualities seemed reflected even in the qualities of his meat, for it was permeated with a unique and unusually disagreeable flavor. This we subsequently referred to as 'Johnsonian.'" Then Mary, "a splendid dog, but we had to put an end to her at camping time...." Haldane was soon dispatched, followed by Pavlova, who had to be killed with a knife in "a revolting and depressing operation," as the duo had jettisoned their rifle in order to lighten the sledge. By Christmas, only two weeks after the deadly day, only one dog remained, and many, many miles. "It was certainly a cheerless Christmas," wrote Mawson. "I remember we wished ourselves happier anniversaries in the future, drinking the toast in dog soup."

By New Year's day Mertz had lost all appetite and on January 3rd he developed dysentery. Soon he was too sick to move. Mawson tended him on his deathbed, "cooking more meat and making appetizing broths." One wonders out of what. On the night of January 7th, after Mertz had had several delusional episodes, he died. "I stretched out my arm and found that my comrade was stiff in death," wrote Mawson.

It was not until January 29th that Mawson stumbled upon a bag of food cached by a search party, only to be trapped in an ice-cave by yet another blizzard, until February 8th, only five miles uphill from the base camp. We are not the first to wonder how it was that he survived the three weeks in the interim. At the very least anecdotal evidence suggests that Mertz may not have been buried intact in his sleeping bag in quite the way Mawson describes.

Andrian said...
This comment has been removed by a blog administrator.
10:30

You sure are creating new definitions of 'roughing it'. After this you might have to climb Mount Everest barefoot or swim through the Everglades wearing a belt of steaks to top this trip. And I'm complaining to my landlord about his penny-pinching heating practices? Boy do I feel whimpy.
What's the address to send you magazines and CDs into the wilderness? And how in the world do you blog out there? Do you have files helicoptered over to McMurdo where Deanny puts them online? Well, I guess in that case you couldn't answer this.

Brooklyn represent! as they say around here.
A