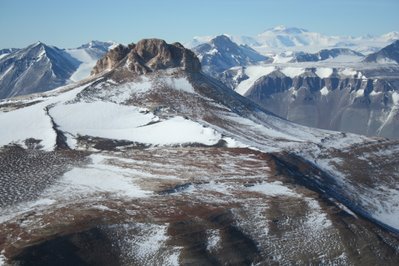 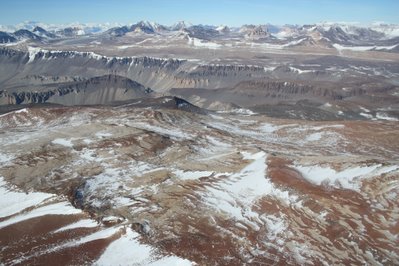 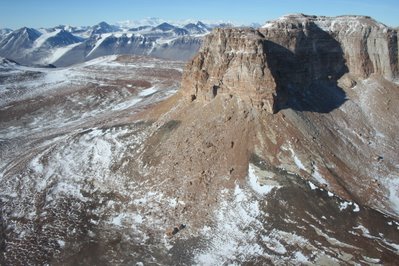 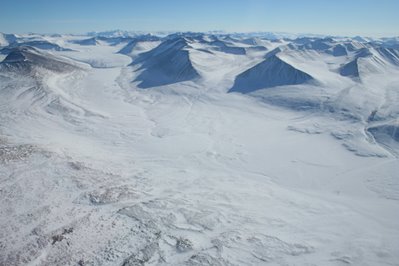 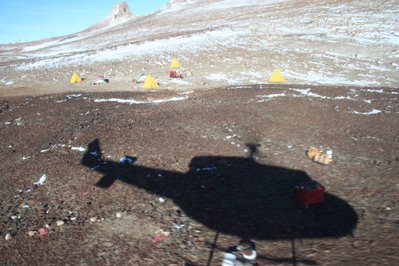 Great minds think alike. The very morning after I had sent you our thoughts on being impersonated at the Halloween festivities your very welcome candy bars, note, and CD arrived on another helo flight, this one coming to take us out for an aerial photography session. Your observation that only those who have achieved a certain level of fame are so lampooned mirrored my pleasure at this celebration of our immortality. I can't thank you enough for the treats and also for your efforts in keeping antarcticiana, the blog, alive during my deep-field absence.

The flight which arrived yesterday was the first to bring visitors, the other two having brought only cargo, and it was quite amazing to see how quickly we have become de-socialized and also content and comfortable with our surroundings. Four scrubbed and healthy-looking GPS specialists disembarked to help our geology party get their mapping operation up and running. As they descended the hill from the dolorite helo-pad our first thoughts were "who are these strange, clean aliens, and what are they doing here?" Then they promptly whipped out cameras and began madly photographing our camp, which, as I have already observed, is indeed located in a picturesque spot at the base of Mt. Boreas. But by now it seemed strange that these strangers were wandering about amongst our tents taking photographs of our turf and home. It was a sort of invasion. I bristled, the way I might have upon emerging from my house on a springtime Sunday afternoon to find some accursed Brooklyn real-estate speculator taking pictures of my domain through the side window of his trolling SUV. As they departed half an hour later we huddled together with the geologists in solidarity and stood, all in a tight little bundle like sheep, blinking in the late evening sun, conversing long after the last echoing rotor-blade whirr had passed into the distance.

Geologist Adam Lewis pointed out that in the wake of the helicopter's visit we could once again see our breath as we exhaled into the cold air; the air here is so clean that it normally contains no condensation nuclei, the airborne particles which permit one's breath to be visible. I had noticed before that, no matter how low the temperature, my breath was always invisible here except inside the tents, but I had attributed this to, in some way I had not put my mind to understanding, relative humidity inside and outside the tents. In fact it is the gas exhaust from the Coleman stoves inside that makes the difference. Outdoors, outside the geologists' cooktent, It was a full five minutes before our exhales slowly dimmed away from cloudy, back to nothingness. We could not see the Mogas exhaust from the helo, even when it was taking off, but obviously even this one flyby released an extraordinary quantity of invisible pollutants into the air. More to the point, since in the northeastern United States I have never once had the experience of not seeing my breath on a cold wintery day, many of us spend almost all of our time living surrounded by an unsettling density of airborne toxins, no matter how clear the air looks.

You asked in your note whether we see the waning moon here. Today is the full moon, and as we approached it the waxing moon was lower and lower in the sky. In fact, at 9PM tonight, the full moon itself is not yet visible. It is probably behind Mt. Aeolus as I go to sleep. I suspect it may stay below the horizon for the entire time it is on the wane. If it is visible on the wane it will be in the middle of the night and only for the next few days, I think. I will try to keep an eye out and let you know as the week progresses. Coincidentally the day before your note arrived we were considering the moon and the sun, both visible, and Adam Lewis, who is turning out to be a font of interesting scientific trivia, and not just of the geological sort, illustrated how Antarctica and our eternal daytime demonstrate solar-lunar geometry much better than is ever possible back home. Again, something I had not thought of. Briefly, he explained that when the moon is full it is by definition and in actual fact to be seen in the sky in a position 180 degrees from the sun, which is to say at the other end of the sky. And similarly, when the moon is fractionally visible, the visible fraction is proportionate to the offset, in degrees, of the moon's position in the sky from the sun's. In other words when half of the moon is visible, its position, from where you stand at the center of a great circle, makes a ninety degree angle with the position of the sun. All entirely logical given that our position relative to the the two orbs is precisely what determines how much of the moon we can see illuminated. But only here andin the arctic is the relationship so easily visualized.

But enough science, lest we lose those readers only here for a quick, cheap laugh.

Best,
Rich
P.S. The images I've sent along are from our aerial photography session, when we flew a round trip down the McElvey valley and back and then around Mt. Boreas.