One of the most exciting, scarce and spectacular shorebirds of the world doesn't actually run about on beaches the way you would expect from a sandpiper, or a plover. The beautifully named amalgam of the two, the highly sought after Diademed Sandpiper-plover, lives only in Andean bogs, soggy high-elevation mountain plateaux generally three or even four thousand meters above sea level. The bird, as Alvaro Jaramillo puts it in Birds of Chile, "appears to have very specific habitat requirements, details of which are unclear. Absent from bogs which appear perfect to an observer, perhaps due to overgrazing.... Its movements are unclear." 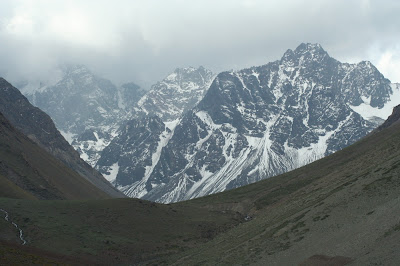 Just this sort of lack of clarity is precisely what makes for a grand birding adventure. Being a glutton for punishment, I decided instead of driving straight to the beach that I would waste a day of my layover between Easter Island and Belize and go for this legendary species at the El Yeso dam, three grueling hours of dirt road driving up into the snowy Andes to the south-east of Santiago de Chile. The braided streams and soggy tundra at the head of this dam's vast lake are one of the lowest elevation locations at which the sandpiper-plover has ever been seen, a mere 2600 or so oxygen-depleted meters above sea level. Coming from the smog-clotted streets of Santiago I knew it would be doubly tough to breathe. 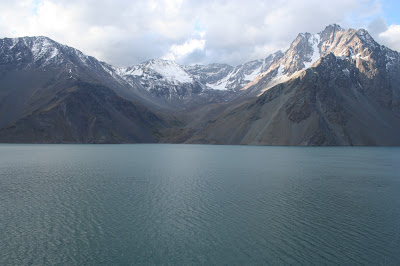 The drive up to the dam seemed endless, despite a very successful stop where I found Chilean Mockingbird, Long Billed Meadowlark, Spot-billed and White-browed Ground Tyrants, Scale-throated Earthcreeper and Mourning Sierra-finch--I know, you are salivating just hearing the names! Once I arrived beyond the vast lake formed by the dam it was obvious at a glance that the only plausible habitat was on the far side of a network of rushing glacial streams, icy-blue rivulets of freezing water that had only recently been snow and were now tumbling down the valley to feed the mighty lake. Numerous horses were nibbling there, however, which I considered a bad sign. To have any chance, there was nothing to do but plunge in, so once again I found myself wading through thigh-deep water in search of obscure birds. Before me, surrounded by snow-clad Andean peaks, was an expansive triangular valley dotted with the grazing horses, all ankle deep in soft muck. With chilly, shriveled toes, my boots squelching, I walked across muddy, peaty clods of grass, which sank as I stepped on them, becoming so many reflecting pools of oozing bogwater. There were fabulous birds (Greater Yellow Finch, Crested Duck, Gray Flanked Cinclodes, Gray Bellied Seedsnipe, Baird's Sandpiper, South American Snipe, Gray Hooded Sierra Finch, White Sided Hillstar, whew, okay, take a deep breath...) but my feet were freezing and not a Diademed Sandpiper-plover was to be found. 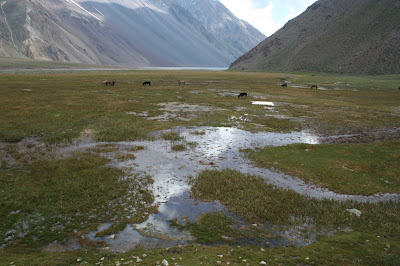 After three or four hours of this absurd bog-trotting, suffering from incipient World War One style trench-foot, finding myself well downstream of all the river crossings I had previously braved, and looking back out over the valley at a much more daunting series of frigid hip-deep fords between me and the car, I started to tire of the whole enterprise. Clusters of birds which had only moments earlier been exciting and new flushed at my feet--a dozen snipe here, eight or ten sandpipers there, a handful of perfectly camouflaged seedsnipes disappearing in amongst the gravels. The Diademed, I was sure, was a write-off, one of those species that for me, at least, would remain mythological. I had trudged back and forth across countless sodden acres without flushing anything like one, and the Baird's Sandpipers which, about the same size, had brought me a rush of adrenalin only an hour before, were now a distracting annoyance as they bolted up out of the marsh in hordes. On the opposite hillside the car was invitingly visible, but with oh so very many obstacles to be swum between me and it. On the floor of the passenger seat, I knew, was half a bottle of mineral water. Although my feet and trousers were soaked, I was parched. In defeat I turned back, trying to remember where the shallowest crossings had been on the way over. Then, as I was edging my way through the mud beside a tiny lagoon, just at the foot of the mountain, an impression of rufous in motion caught the corner of my eye, like the quick swish of a foxes tail. I looked quickly sideways over the narrow body of water. Nothing but wet pebbles, gray, black and red. Then one moved. In one smooth and masculine motion I brought the binoculars up to my eyes. Two! Abundantly incontrovertibly splendidly Diademed Sandpiper Plovers. There they were, trapped halfway between scurrying away, revealing themselves, and sticking tight, but uncomfortably nearer than their luxurious sense of personal space permitted them. I edged closer, one step at a time, ecstatic. I know this isn't nearly as good for you as it was for me, but in return for your patience, dear reader, I bring you this lone, blurry photograph. 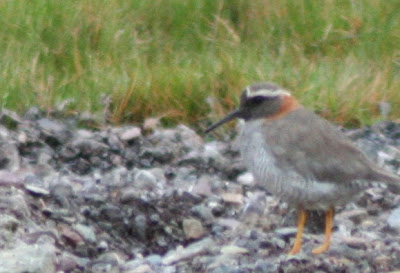 How sweet the taste of VICTORY

and how totally unfazed the boid

Congratulations from your hottest fans
here in dreary New Jersey

But, Mommy, what's a plateux?

Oops. Its rather like a word meaning 'more than one plateau,' except with the "a" omitted for convenience...

congrats on your frozen footed victory....even if you are gripping us off.

all hail flan. way to go.