Duluth smelled of lumberyard. The entire town was pervaded with the not unpleasant but unexpectedly strong odor of a freshly opened bag of mulch. Near the waterfront we discovered, in a broad expanse of decaying industrial real estate, perhaps some sort of rail yard, an enormous mound of wood chips, sending puffs of steam up into the cold, moist air from heat generated deep in its woody bowels. There were chill winds blowing off of Lake Superior, but Duluth still seemed to have a gray, immovable ceiling, a dense, oppressive blanket of cloud and fog pressing down upon it. If this is late May in northern Minnesota, what must February be like? We thought of the music of Low, area rockers who make ponderous, dirgelike pop

of the sort that suggests why Scandinavians suffer from unusually high rates of suicide.

Although we had earlier that day crossed a narrow northern tendril of river sharing the name of the mighty Mississippi, it was only after crossing the bridge into Wisconsin that we felt we had truly arrived in the east. The south shore of Lake Superior resembled nothing so much as the Maine woods, with clumps of birches running in narrow bands through the dominant conifers, and loons cackling on densely wooded ponds. Our remote, interior campground was surrounded by pristine forest, although it suffered from a certain lout factor; it was the last night of Memorial Day weekend, and more than one campsite was occupied by festive high-school youth. 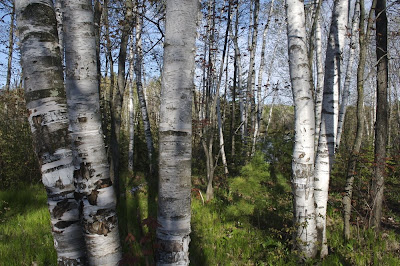 After dark, they quieted down, perhaps to tell ghost stories around the campfire; we heard nothing but the steady rush of the Coleman lantern and the onomatopoetic cries of a team of Whippoorwills. Then started up a repetitive, high-pitched monosyllabic call, beaming out through the woods like a metronymic radio beacon. (Or, as we read later in the National Geographic Field Guide,

"a monotonously repeated single-note whistle"). It had none of the eerie quality of an owl, hooting or screeching, but it was an undoubtedly avian sound, and we followed it, tiptoeing through the dark woods to a clump of pine trees clustered around the water-pump. Whee, whee, whee, whee, whee, the thing called, from somewhere just overhead. Weep, weep, woop, whoops, I whistled clumsily back, while peering about in the foliage, thanks to my Petzl,

a tiny LED headlamp I was wearing strapped to my head, like an emasculated miner. "Be serious. You're not going to see anything with that feeble light," said Laura. But my imitation was enough to pique the bird's curiosity, and soon, like an apparition, a whitish ball of fluff flitted noiselessly through the soft beam. With it, the whistling moved closer, and lower. I persisted, whistling more softly, like, I thought, an unattended infant's version of the adult call coming down from overhead. Then it came, and sat on a branch not three feet over our heads, wide-eyed, seeking the intruder in my headlamp: a cute and cuddly (unless you are a small rodent or nestling, in which case substitute the adjectives terrifying and ominous) adult Saw-whet Owl, all of six inches tall. 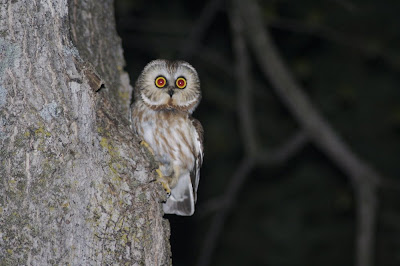 "Watchu doing in my grove?"

Michigan’s Upper Peninsula felt as much like Maine as the tip of Wisconsin had; all through the long morning’s drive across it we expected at any moment to see a big bull moose striding through one of the countless moss-encircled bogs. The roadside stands selling “pasties,” venison jerky and wild rice, all apparently local specialties, had many postcards depicting moose, but we saw no real ones. 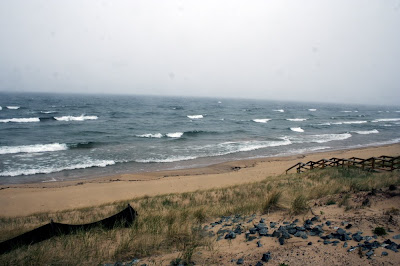 Once over the Mackinac Bridge into Michigan proper, we headed to the jack-pine flats of Oscoda County and a chance at one of the United States’ rarest birds. Certainly its rarest warbler: while the Bachman’s warbler, once a denizen of the expansive bamboo swamps of the south, still hopefully appears in most bird guides, it is “presumed extinct.” (What’s that you say? You didn’t know much of the south was once covered in bamboo forest? That’s because it has been many generations since this habitat was wiped out, the bird lingering on in a few last corners until inevitably capitulating to humankind’s excesses.) That leaves Kirtland’s warbler, some 3000 surviving individuals of which breed only in the scrubby pine forests of north-central Michigan.

After a tranquil night in the county park campgrounds of Mio, Michigan, we rose early for a 6:45 rendezvous at the Mio Ranger station. During the breeding season, when male Kirtland’s warblers are singing, the forest service escorts hordes of drooling birders to see them on their territories. These officially sponsored jaunts always involve some sort of briefing to go with the handholding, and this one was no exception. At 7AM sharp we packed into a conference room with a good dozen hardcore binocular toting obsessives to watch an orientation video on the warbler, its habitat, and the National Forest Service’s efforts to preserve both. The bulk of the crowd looked, I’m embarrassed to say, much the way I will inevitably look in ten to fifteen years: paunchy and gray-bearded, wearing ill-fitting acreages of gore-tex and frumpy hiking boots, with Germanic ground-glass binoculars running into the low four figures looped around their necks. Oops: I’m told that except for the gray in the beard I already fit this description.

Then, the chill morning air crackling with anticipation, we possed up, clambering into our out-of-state vehicles to convoy behind an avocado-green forest service SUV. 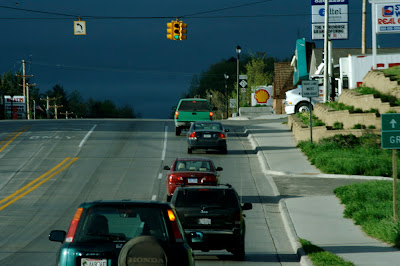 Caravan of the obsessed, following the forest service out of Mio. When I pulled into the police station the night before to ask directions to the forestry office, the cop said "just go back to the traffic light...." And I said: "that traffic light just down the block?" "Yeah, yeah," the officer replied, dismissively, "it's the only one in the county."

Kirtland’s warbler has not made life easy for itself. For reasons which remain unclear, it breeds only in young stands of jack-pine between five and twenty-five feet tall, which is to say trees about seven to twenty years old. It nests on the ground, and only chooses large stands of pine, eighty acres being the minimum requirement.

Whatever Darwinian enhancements led it to its extraordinarily finicky degree of specialization almost caused its demise in the modern age. Both the jack-pine and the bird historically require fire. In the past, new tracts of young trees resulted from lightning strikes and the resultant natural forest fires; jack-pine cones do not even pop open and release their seeds until the heat of a burn sweeps over them. But the success of the Smokey the Bear fire awareness campaign and our own species' general antipathy toward forest fires, even when they are a necessary safety valve,

almost caused Kirtland's warbler's extinction; in the seventies there were as few as 175 pairs of warblers hanging on. 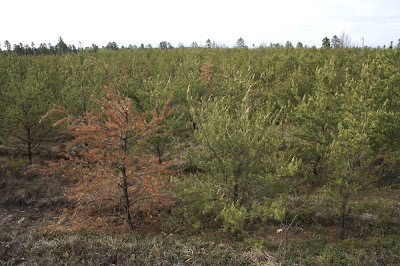 Young jack-pine habitat, looking much like a Christmas tree plantation

The warbler likely only exists today because of conservation dollars and intensive management. Fire is no longer used to create habitat, but the jack-pines, once they have grown too tall to please the bird, are now harvested and pulped, and the land reseeded. Prime habitat looks almost exactly like the more coniferous portions of South Jersey's scrubby Pine Barrens.

Our convoy pulled to a halt beside a large expanse of five to seven foot tall pines, along a sandy dirt road southwest of Mio.
"The warblers like sun, and it's obviously overcast, and they like to be warm, and as you can tell it is quite cold out here," said our guide, preparing us for the worst. "But I'm hearing one singing over here somewhere." She gestured behind her.
"That sounds nothing like the recording we've been listening to over and over in the car these past few days," commented one birdo.
"The song is quite variable, unlike many other warblers," said our guide. "And very loud. That one is quite far away still."

We walked down the road. Another Kirtland's called, off to our left (2868). The group turned as one, scanning the remnant, leafless oaks jutting above the level of the pines, on which the singing males often like to perch. Far, far away, I saw a tiny flash of movement in the snaggy branches. "I think I've got it," I said. "Not much of a view." It was a plump, even rotund, warbler, yellow below, the sides of the barrel chest streaked with black. Gray-blue above. Distant. It sang again, extraordinarily loudly, I thought, for a bird its size. And so far away. By now those in the party with sixty-power spotting scopes had planted their tripods and had the singing bird framed in their overpriced optics. We all had a turn looking. It was, I must admit, rather underwhelming, not much more than a small blob of partially backlit feathers, vibrating in the extremely narrow field of view of the zoom lens. 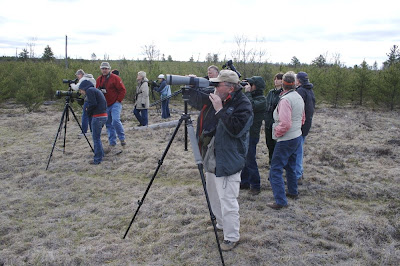 Observers, wondering if the small, blue and yellow bird, singing its heart out some eighty yards away, will ever come any closer

It was extraordinarily cold, and our convoy of birdos had charged off into the bush without so much as glancing down Mio's main street to see if there was an espresso shack. The birds, happy to sing somewhere off on the horizon, also seemed happy to stay there instead of popping in for a closer visit (we could not walk out to them for fear of trampling on a nest). These factors conspired, and while some of the group determined to stay on and stamp their feet, waiting for sun, warmth, and better looks, we said adieu. The Kirtland's warber was never, after all, going to come and perch over our heads like the Saw-whet owl had, and we were still basking in that experience.

UPDATE:
By fortuitous coincidence, within an hour of posting the above, one of our fellow party of intrepid Kirtland's spotters emailed, proving that those who stayed behind and braved the cold were finally treated to superior looks at the bird. As we were leaving I had given my card to Dan Brown in hopes that antarcticiana's readership might have a chance to actually see something resembling a warbler, since with the views I had, my 300mm lens would have captured nothing but a murky dot. Such gambits rarely work, since those one meets in the field and ask for photos seem invariably never to follow through, so I am particularly indebted to Mr. Brown. 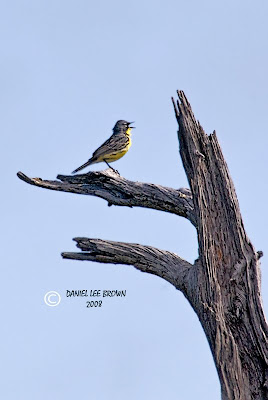 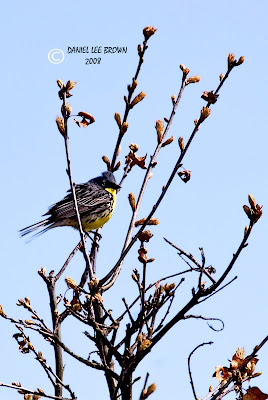