It's a slow news week here in Red Hook, a perfect moment to delve into the history, personal and global, of the bamboo kayak. Arcane, you say? Perhaps. But once again the converging lines of conspiratorial coincidence lead us inexorably to our topic.

Years ago, before any thought of visiting Antarctica had ever entered my mind, I went through a phase during which I exhaustively researched home-made kayak and canoe construction online. It was rather like that moment 10, 11, or 12 year-old girls go through, when they can't get enough of horses. At the time I was living in my main man Alex's vacation hideaway, a simple frame cottage built atop a ridge in the highland forests of Puerto Rico. I was working on my book in the mornings, and luxuriating in free afternoons, and I had the thought that I might spend some of them paddling along the shores of the Caribbean, a twenty minute drive downhill from my writer's retreat.

There were many recipes for boats to be found on the web, even back in 2000, but most called for exotic ingredients like one-quarter inch marine-grade luan plywood, dozens of knot-free board feet of British Columbian cedar stripping, or expensive epoxies manufactured in northeastern sailing havens. None of these things were easy to find in Adjuntas, Puerto Rico at any price. In any case, my budget for the project was slim, and ideally, zero.

It was then that I stumbled upon Craig O'Donnell's The Cheap Pages, a blog about one man's personal passions compiled before the word blog had even been invented. Obsessed with home-made guitars, his dead cat, and, first and foremost, the construction and navigation of extraordinarily low-budget water-craft, this was clearly the production of someone after my own heart. Years before the emergence of the e-book and Google's scans of the entire contents of the world's libraries, O'Donnell sought out and digitally reproduced countless obscure public domain texts on small boating adventures. (Sadly no link, as at the moment the Cheap Pages are down; one can only hope that soon they will be restored.... UPDATE: Thankfully back online.)

I had never heard of Fridtjof Nansen, the great Norwegian polar explorer, but there he was, visiting the Greenlandic Inuit in the 1880s and appreciating their magnificent kayaks, built entirely from driftwood in a land without trees. (It was probably by looking at kayak frames that Nansen developed his theory that the polar icecap actually has a directional flow, rather than being frozen in place. He identified the wood he saw in Greenland, most likely in the form of kayak parts, as having come from Siberian tree species, and hypothesized that they had drifted up and over the north pole to get there. He soon put this hypothesis to the test. 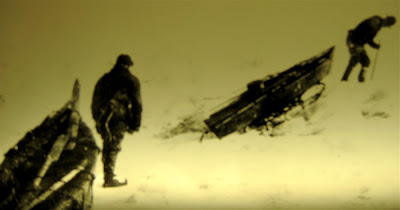 Fridtjof Nansen and Hjalmar Johansen left their ship, the Fram, frozen in the arctic ice, and set out for the north pole on foot, dragging their bamboo kayaks behind them on sledges.
Photo of photo taken at The Fram Museum, Oslo

We will perhaps never know exactly where Nansen got the idea to build his own kayaks out of bamboo. Almost as intriguing is to wonder where he sourced it from, for he would have had to bring it to Norway from more tropical climes. He must have had something in mind for the bamboo he stowed in the hold of the Fram. I've already theorized that his bringing bamboo along with him might suggest he knew all along that he would eventually abandon the ship and continue on foot. He not only survived the experience but went on to win the Nobel peace prize for his work with Armenian refugees, making him one of the indisputable world's coolest humans. 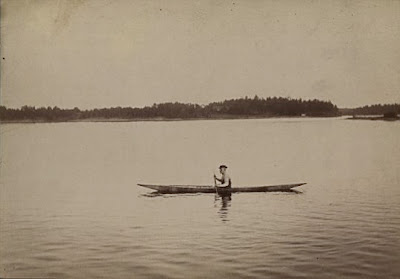 Nansen, paddling a kayak he brought back to Norway from Greenland.
Image shamelessly stolen from The Nansen Photo Archive.

Bamboo, O'Donnell suggested, is an ideal material from which to build a kayak. It is strong, flexible, lightweight and easy to work; what's more, it is fabulously "green" and "sustainable." Timber bamboo reaches maturity in three years. On the property in Puerto Rico it grew in abundance, to heights of thirty feet and more, great culms as big around as my thigh. It was late spring, when bamboo sprouts, putting on all its annual growth in a short month. New canes were poking up outside the kitchen window, and they grew so fast that when I left my hillside retreat to go food shopping I would return to find the shoots a foot taller. I harvested some older, mature canes and set to work. 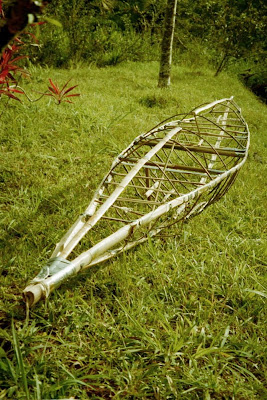 Adjuntas, Puerto Rico, early in 2001, the framing almost complete. Note duct-tape holding the glorious craft together, where the gunwhales meet at the stern end. 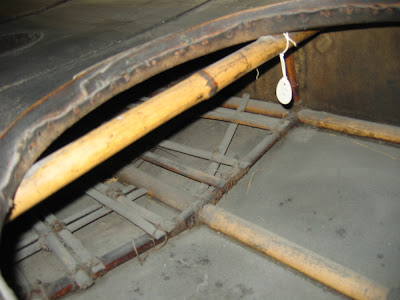 Aft cockpit view of one of Nansen's bamboo kayaks, which are on display at the Fram Museum in Oslo, but barely; this boat was under a diorama, beneath the guardrail, and difficult to get a good look at, let alone photograph. 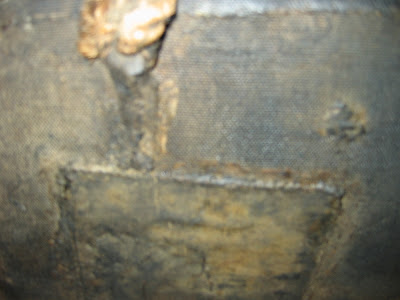 Patch on the Nansen Kayak. Eighteen months of dragging these boats across icy pressure-ridges made for lots of frozen-fingered sewing to effect repairs in the field 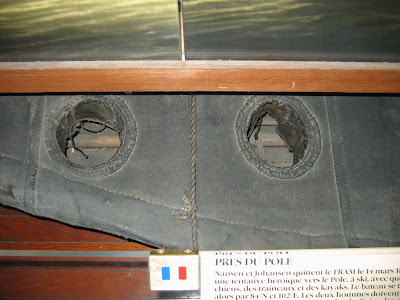 Interior of Nansen kayak, including ancient polar dust, photographed by surreptitiously thrusting my camera down into the cockpit. The view towards the bow, where the paddler's feet would be. 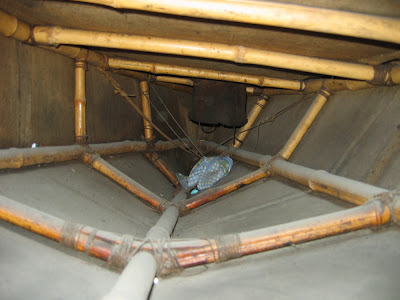 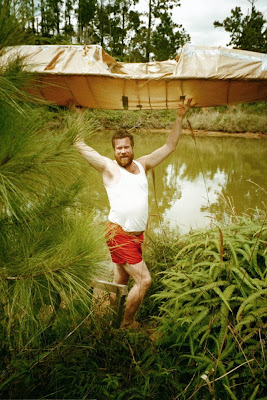 The author, demonstrating the whisper-light character of the SS Adjuntas. The skin is a tan polytarp, purchased at Wal-Mart and sealed with more duct tape. 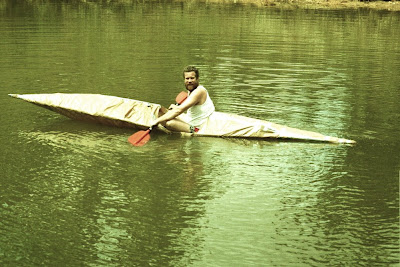 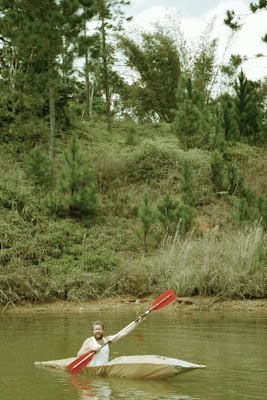 Maiden, and only, voyage, on a local mountain pond. Design flaws were immediately apparent; this kayak had literally half an inch of freeboard and required immaculate balance. From the way the bow protrudes from the water like a torpedo I also appear to have positioned the cockpit a good eight or twelve inches too far aft. I hadn't intended to build a bamboo "sit on top" kayak, and decided my lovely was not quite fit to brave the savage waters of the Caribbean.

Muy fino, capitan. I think it's time for another try. It looks like Nansen used something other than a tarp for the skin.

Hey, thanks for the nice comments.