I knew this whole blogging thing was going to pay off eventually... 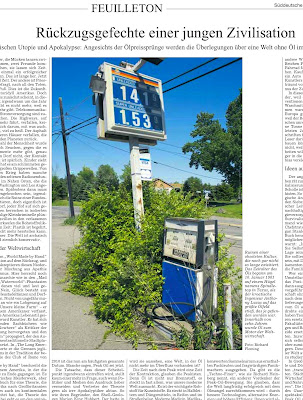 One of the many sharp-eyed antarcticiana-reading newspaper editors around the globe thought this image from our recent travels was too good to pass up, and slapped it on the front page of Monday's edition of one of Europe's major dailies. Well, at least one section of the paper, the uniquely European "feuilleton." What's more, instead of simply stealing it, they actually contacted me and purchased it, in cold hard euros, the new dominant world currency. If anyone has enough German to offer a translation of the photo caption in the "comments," it would be much appreciated. We're getting something about the ruins of an obsolete culture, but by the time we muddle our way down to what seems to be the mention of a Croatian engineer, we've pretty much lost the thread... 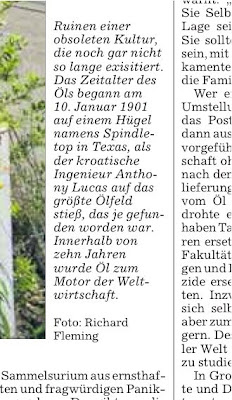 Since I wrote that caption I might as well....


Ruins of an obsolete culture that hasn't existed that long yet. The age of oil began on January 10th of 1901 on the Spindletop hill in Texas, when the Croatian engineer Anthony Lucas came upon the largest oilfield ever discovered by then. In a matter of ten years oil became the major driving force of the world economy.

....all going with a lengthy essay on the latest musings on peak oil in literature and non-fiction books. Pretty much doom and gloom and the most forwarded story on the paper's website today. Well, if Germans understand one thing it's doom and gloom.

Hello Rick,
looks like you already received a very fine translation of the caption, so I can go back into digital slumber mode.
Cath loves your blog and alerted me that you needed help with some German phrases.
We'll be in Germany next week. Bis dann und Tschuess Georg