Edward Hopper Rolls over in his Grave

It is difficult to agree with Mr. Rogers that today is a beautiful day in the neighborhood. Today marks the grand opening of Ikea, Brooklyn, a massive big box store that will irrevocably alter life in the formerly tranquil waterfront reaches of our beloved Red Hook. On weekends it is predicted that as many as 17,000 cars will come here bringing shoppers, and many of them will inevitably clog Red Hook's main drag, the formerly somnolent Van Brunt St., already much busied by traffic heading to the Fairway Supermarket. Last night we wandered down to enjoy Red Hook's last sleepy evening and have a look at the monstrosity. 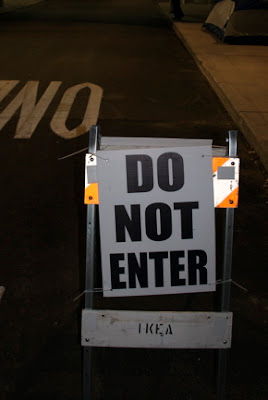 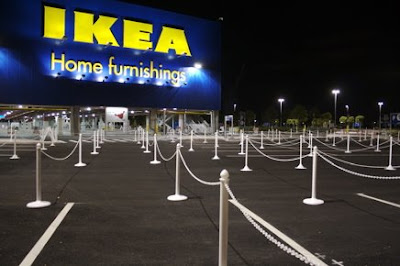 The last days of emptiness

The owners of an equally vast lot next door are hoping some other massive retail developer will jump on the bandwagon, raising neighborhood fears that this district of ancient red brick warehouses and desolate pilings is destined to become a grotesque, gigantic shopping mall.

Hoping to generate some press and advance publicity, Ikea suggested that eager buyers camp out, competing to be the first lucky entrants to the store. The prize? A free sofa to the first 35 visitors, and an armchair for the next 70 or so. This is the first truly urban Ikea, and this promotional idea, while it might be cute in the suburbs, attracted a motley crowd who reduced the pristine facade of the new and massive structure to a squalid vision peopled by refugees and strewn with crumpled blankets. 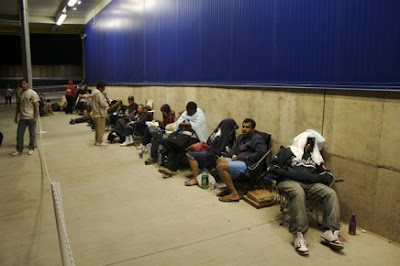 Squalor and Pathos: The tragic blight of homelessness? The unexpected cancellation of a regional bus service? A pre-dawn ritual of chronic users awaiting the opening of the methadone clinic? No, it's the grand opening of Ikea! 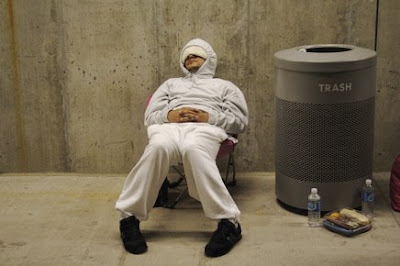 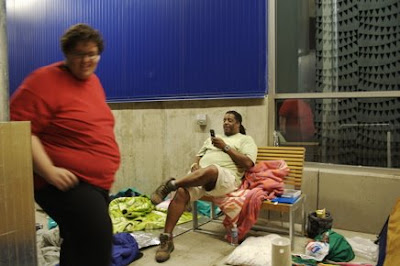 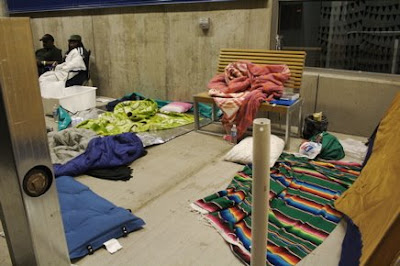 None of those waiting claimed to be in desperate need of a new sofa, although many agreed that Ebay and Craigslist would next week be full of cut-rate deals on brand-new seating, offloaded by winners of this perverted "contest." Instead the campers suggested that they were excited to be part of an historic event, as if being one of the first to enter the new Ikea was akin to meeting Obama, or shaking hands with the pope. Many shared a sense of fleeting celebrity that seemed for them to obscure the desperate lack of imagination and shuddering boredom manifested in this simultaneous embrace and indictment of consumer culture. (There were also greasy-haired and bleary-eyed fellow bloggers, irate at being herded about by Ikea security guards. To which we can only say that if you join the line waiting to go into the corral, expect to be treated like cattle.)

Object of desire: the elusive sofa, glimpsed through the still-locked front door of the Ikea store. 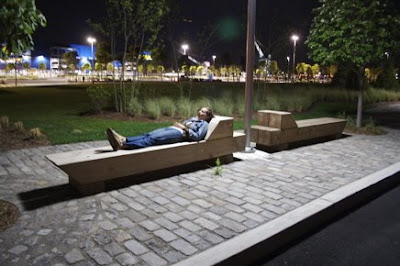 If the grimness of this waiting game and our anticipation of the traffic horrors to come weigh more heavily on our minds than the easy access we will now have to cheap candles and furniture predestined to collapse, we must admit being impressed with the public esplanade, which has many massive benches, waterfront views, and abundant landscaping. Ikea seem unaware that they have moved into the ghetto, and have dotted the walkway with numerous chaise longues perfect for taking in the afternoon sun, with none of the usual bumps and "armrests" designed to prevent actual sleeping. There is room for many people to live here, and it could be quite comfortable, particularly if the port-o-potty near the ferry terminal remains unlocked and in operation. Here Laura takes a quick catnap. We're considering renting out the house for the rest of the summer and moving to Ikea plaza. After all, it is Ikea itself that is promoting the idea of stopping by and camping out.

UPDATE: Although the free water taxi shuttling to Lower Manhattan every ten minutes certainly eases the sting, I'm afraid this post, more heartwrenching than the smartass postcard to Ikea I wrote above, really nails it.

Oh lordy, my neighborhood is changing...
Nice pictures! The only thing that really appealed to me about the Ikea project was the plans for the esplanade. I do hope it is nice. That and the free ferry to and from lower Manhattan, although my gut tells me that that will only last for a few months before they start charging.

A tip for all you travelers out there. "Escabeche de pollo" means "pickled chicken." Not cooked with heat, but pickled! Don't make the mistake I made. I was paying for it all day yesterday!

Does anyone know any indi stores? Indi Stores: small stores that none have heard about. there is an equalibriam here. If the indi stores is too unknown, then it goes out of business. If the indi store is too well known, inindated with business, then it runs the risk of opening up another store and snowballing to chainstore proportions.

The difficulty of retaining the indi store feel is the square of how many stores there are. (I think I need to go to sleep.)

don't you hate it when the word verification is all crammed together and unintelligable/incongrous to teh eyes? teh=intentional

IKEA -- music to my ears if not beauty to my eyes! How I wish your neighborhood one could be sent to Springfield, MO or elsewhere in the Ozarks.
"cheap candles and furniture predestined to collapse" combined with incredible marketing strategy throughout the store, an array of toys that require imagination and user-produced noise effects rather than electronic screeches or robotic speeches. Even the stuffed animal rats (not to my liking) are better than x-box or nintendo offerings.