This afternoon we drove out to Castle Rock to shoot some scenics. As soon as McMurdo Station was lost behind the first hill I felt a sense of relief. The community here, at least at this time of year, is so insular, and the opportunities to leave so infrequent, that after about ten days "on station" I already feel a bit imprisoned. Until today we had only been to Scott's Discovery hut, a few hundred meters away from the dorms. Our hope was that the sky would clear enough for us to actually see the sun; this is a big deal for winterovers, who haven't seen it since April. We hoped to get some pictures of it low in the sky and perhaps be able to illustrate the sense of euphoria that must come when it finally rises again. In the first photo I believe it is lurking somewhere there in the clouds. 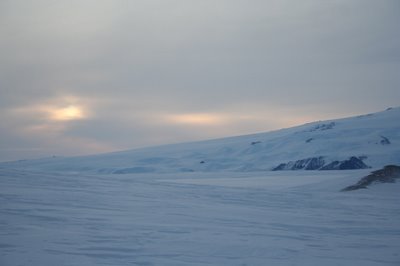 We took a Pisten Bully along the Castle Rock loop, one of the flagged, authorized recreational tracks that Raytheon workers and other McMurdo community members can enjoy on their day off. (The typical Raytheon contract is six days times nine hours). Anne drove this absurd and humorous vehicle. 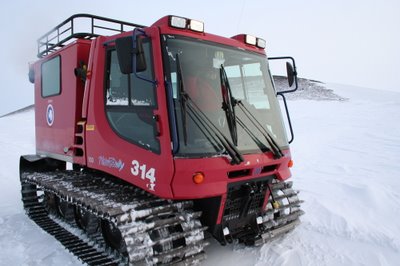 Castle Rock is a legendary landmark, used by Scott and Shackleton and most anyone who has every sailed or steamed deep down into McMurdo sound. 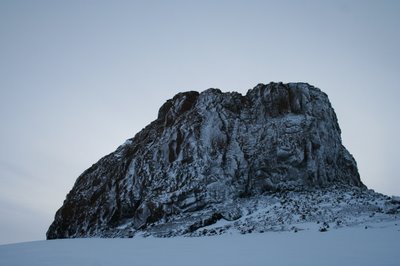 We scrambled up the slope to get some pictures of the frozen sound from the ridge above. Anne humped the tripod up the mountain because I have a "no-schlep" clause in my contract. 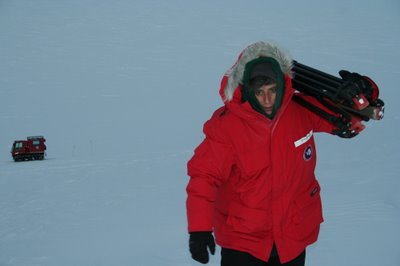 The scenery is pretty mind-blowing. 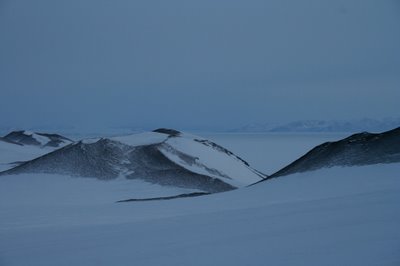 I loaded these photos in a little larger than usual so you should be able to click on them and get an enlargement...

"...it is hard to conclude that we are anything more than a bunch of pussies", a conclusion that seems to apply more to those with no schlep clauses than it does to the brave and determined women of the ice.

I have to say that no-schlep clause
has me wondering too.
What kind of a man did I raise?
A mother salutes your female team mate

That's just grand... Two anonymous comments impugning my get up and go. Both of which appear to be from my parents. I suppose that having pitched my self-deprecatory tent on the ice I now have to sleep in it, but just for the record, the "no-schlep clause" is what passes for humor around here.

Actually, before I diss my dad I should observe that the use of the word "conclusion" following a quotation that includes "conclude" would have demanded a laxity uncharacteristic of the patriarch. This, coupled with the indubitably feminist slant of the comment, makes my original attribution suspect. I'm now suspicious of the subsequent generation...

it seems to me, richard, that you have avoided being the schlep (n) by inserting said "no-schlep" claus.

A point that seems to be have been overlooked by the parents.
As for the gender of the director, to hell with that, it's her movie, let her schlep.
Up with workers rights!

yo, family man, that first post was all brooklyn. what, you think that i've got no feministical side?

now that your mom's put it out there, i've got to confess to having spent some time wondering myself...what kind of man did your mother raise? and do your two brave teammates know what sort of person they've signed on with?

Hey, isn't that the vehicle from "The Shining?...

to anonymous 09:02
dude--I momentarily mistook your golden prose for that of my father. Do you have any idea what high praise that is?