Hold on to your appendices, we're stranded. We drove out to the Pegasus airstrip today to see off the last plane of the season. The next flight will be in a month at the beginning of "main body," essentially summer. So in the Steven King scenario, any minute now our friends and neighbors will start mysteriously disappearing. My man Phil drove us and 13 would-be travelers out along the same route we came in on last weekend in a Delta, an enormous all terrain vehicle abandoned here by the Navy back at the dawn of time. 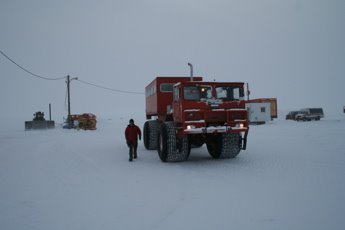 The back, where I was sitting transmitting audio via wireless to Sylvestre in the cab, is like a jacked up cross between a monster truck and a school bus with all the seats ripped out. A stinky diesel blower/heater pumps tepid air into the compartment. We drove in an almost complete whiteout, completely unlike the conditions when we landed and McMurdo was visible from the runway. The road is lined with bamboo canes (amazingly they use real bamboo--aside from its other incredible properties it is lightweight and temperature neutral to the touch) flying flags. This is the exact technology Scott used to mark his food depots on the South Polar journey (for all of those who thought Marei's bamboo photo I posted earlier was off topic, Fridtjof Nansen also built his kayak frames out of bamboo). Every ten yards or so there is a flag, flapping and torn, as Phil pointed out, like a Tibetan prayer flag, marking the route. We could only see four or five flags in front of the vehicle. There was nothing else to be seen but white, white road, white snow-clad ice, and blowing white snow. I have no idea whether the passengers sitting beside me on long benches thought they had the slimmest chance of actually flying, but all were bundled up as per regulation, and had their orange kit bags for the flight up. Because conditions can change so fast, and because the Air Force C17 has such a huge range, policy is for the flight to take off from Christchurch, fly down to the ice, and only then abort the mission and fly back if the conditions are unsatisfactory. Because they keep the aircraft on the ground for the shortest period of time possible, any passengers out must kit up and drive out no matter how unlikely a landing seems. But to my great surprise, as we approached the airstrip through an endless wall of blowing snow, we saw that the plane was actually on the ground, and moments later the last of the departing winterovers were giving their van drivers good-bye hugs and clambering up into to the big gray beast. It was a most impressive sight to see the C17 sitting out in the middle of white nothingness on the frozen sea with no other land or frame of reference to be had.

Already it gets light, which is to say the entire visible world is suffused with a deep, deep blue, by 9 in the morning, although the sun has not yet made an appearance. Had it been clear today the sun should have been visible at midday, at least down on the ice by the runway. At this latitude the daily change is palpable; we have half an hour more light each day, so that by the end of next week I will be glad of the opaque turquoise curtain that velcros tight around the window beside my bed.

Are there any clear signs of global warming? that's what i thought u meant by "horror movie"

how is it? How cold is it? Are you enjoying it?

Please, documentary guys, make my friend the Delta driver, Phil, make him rich and famous. Or at least rich. He deserves it. He is smart and cool and funny. Take advantage of that, and showcase Phil, and his really interesting friends Jon and Ben, in your documentary, and make sure you say its folks like these who make the US Antarctic program ROCK.